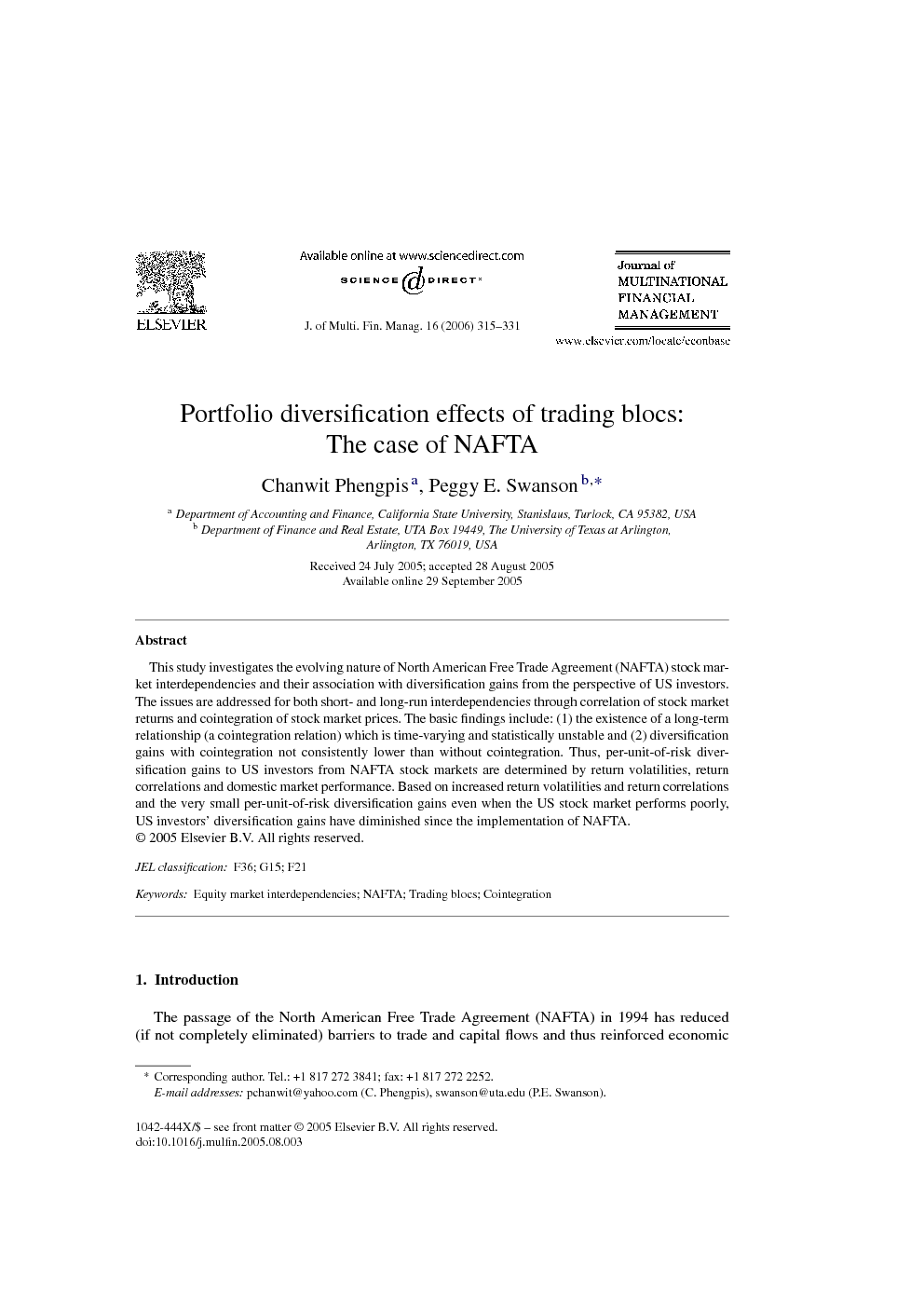 This study adds two new dimensions to prior empirical work on short- and long-run interdependencies of NAFTA stock markets and on potential diversification gains to US investors from international stock portfolio investments. The data are stock market price indices in Canada, Mexico and the US covering the period from January 6, 1988, to December 31, 2003. The first dimension is the evolving and time-varying characteristics of NAFTA stock market interdependencies. Through return correlations and cointegrating relations, short- and long-run interrelationships are analyzed dynamically over rolling 10- and 5-year windows in addition to investigations over the full sample, the pre-NAFTA and the post-NAFTA periods. This is in contrast to previous studies which test only the full sample and non-overlapping, pre-determined subsamples—an approach which cannot properly or completely capture the dynamics of short- and long-run interdependencies because changes in these relationships are not known a priori. The second dimension provides insight into the magnitude of potential diversification gains to US investors from NAFTA stock market investments. While stock market interdependence and diversification gains in an international context have been investigated separately for other groups of markets, the two aspects have not been examined together. This joint approach provides better understanding of the relationships between interdependencies and gains, especially over time via rolling window methodology. The results from static analysis over the full sample, during the pre-NAFTA period and during the post-NAFTA period, consistently indicate the absence of long-run interrelations among NAFTA stock markets through a cointegrating relationship. These results support those in Ewing et al. (1999) who report no evidence of cointegration even if NAFTA passage in 1994 is taken into consideration as a dummy variable. However, the results differ from Darrat and Zhong (2001) and Gilmore and McManus (2004) who report evidence of cointegration during different pre-determined post-NAFTA periods. Thus, it is possible that long-run interrelations among NAFTA stock markets are sample-dependent, or specifically, time-varying and require dynamic rather than static analysis such as rolling cointegration methodology for accurate interpretations. This paper's dynamic analysis for 10- and 5-year rolling windows indeed identifies the presence of a time-varying, statistically unstable cointegrating relationship among NAFTA stock markets. Strongest significance of cointegration occurs over the window which covers two major tumultuous events, the 1994–1995 Mexican peso crisis and the 1997–1998 Asian financial crisis. Discernible cointegration evidence during periods of international economic turmoil suggests that stock market prices in each nation are responding to the same set of adverse news and information rather than reflecting economic fundamentals. This implication is consistent with the conclusion in Atteberry and Swanson (1997) who relate a cointegrating relationship with looming uncertainties in NAFTA stock markets. The static and dynamic results collectively imply that increased intra-NAFTA trade and capital flows, without other coordinated policies to help align domestic economic variables, have not integrated the three NAFTA economies to an extent sufficient that a time-invariant, statistically stable cointegrating relationship among their stock markets has evolved. Without dynamic analysis to reveal the time-varying nature of cointegrating relationships, researchers erroneously may infer, when relying on static analysis over fixed post-NAFTA periods such as in Darrat and Zhong (2001) and Gilmore and McManus (2004), that linkages among NAFTA stock markets are stronger than they are in reality. In contrast, short-run interdependencies among NAFTA stock markets appear to have strengthened based on increases in the magnitudes of pair-wise return correlations over time. These increases may result from various contributing factors such as relaxation of trade barriers as a result of NAFTA.9 Increases are especially pronounced between Canada and Mexico and between the US and Mexico, but less strong between the US and Canada, the two countries between which trade and capital flows barriers had been less restrictive and where pair-wise return correlations had been relatively high even before NAFTA. The increased return correlations with Mexico are also consistent with higher return volatilities for stock markets in Canada and in the US after NAFTA. Per-unit-of-risk diversification gains to US investors are appreciably lower in the periods following NAFTA passage, reflecting increases in return volatilities and in short-run interdependencies among the markets through return correlations. This is true for the entire post-NAFTA period and for 10- and 5-year post-NAFTA investment horizons irrespective of timing of portfolio formation. When the US stock market performs poorly, even a small positive average return on the US-equivalent-risk NAFTA efficient portfolio can result in considerable gains to US investors through return differential (ΔR). This portfolio, however, cannot deliver per-unit-of-risk gains in the magnitude obtainable during the period prior to NAFTA. In summary, the findings indicate that, because a cointegration relation is time-varying and statistically unstable, long-term trends may not necessarily nor consistently explain the magnitude of per-unit-of-risk gains to US investors through time. Gains during the period when cointegration is present are not necessarily lower than gains during the period when cointegration is absent. Moreover, even when cointegration is detected at the same level of statistical significance during two different periods, per-unit-of-risk gains can vary appreciably. Thus, it is not appropriate to conclude that the absence (presence) of cointegrating relations across national markets necessarily implies that appreciable (minimal) international diversification gains can be acquired, especially if these relations are intertemporally unstable. It appears that per-unit-of-risk diversification gains to US investors from NAFTA stock markets are determined by return volatilities, return correlations and domestic market performance. Given the increased return volatilities and return correlations and the very small per-unit-of-risk diversification gains even when the US stock market performs poorly, US investors’ diversification gains have diminished since the implementation of NAFTA.