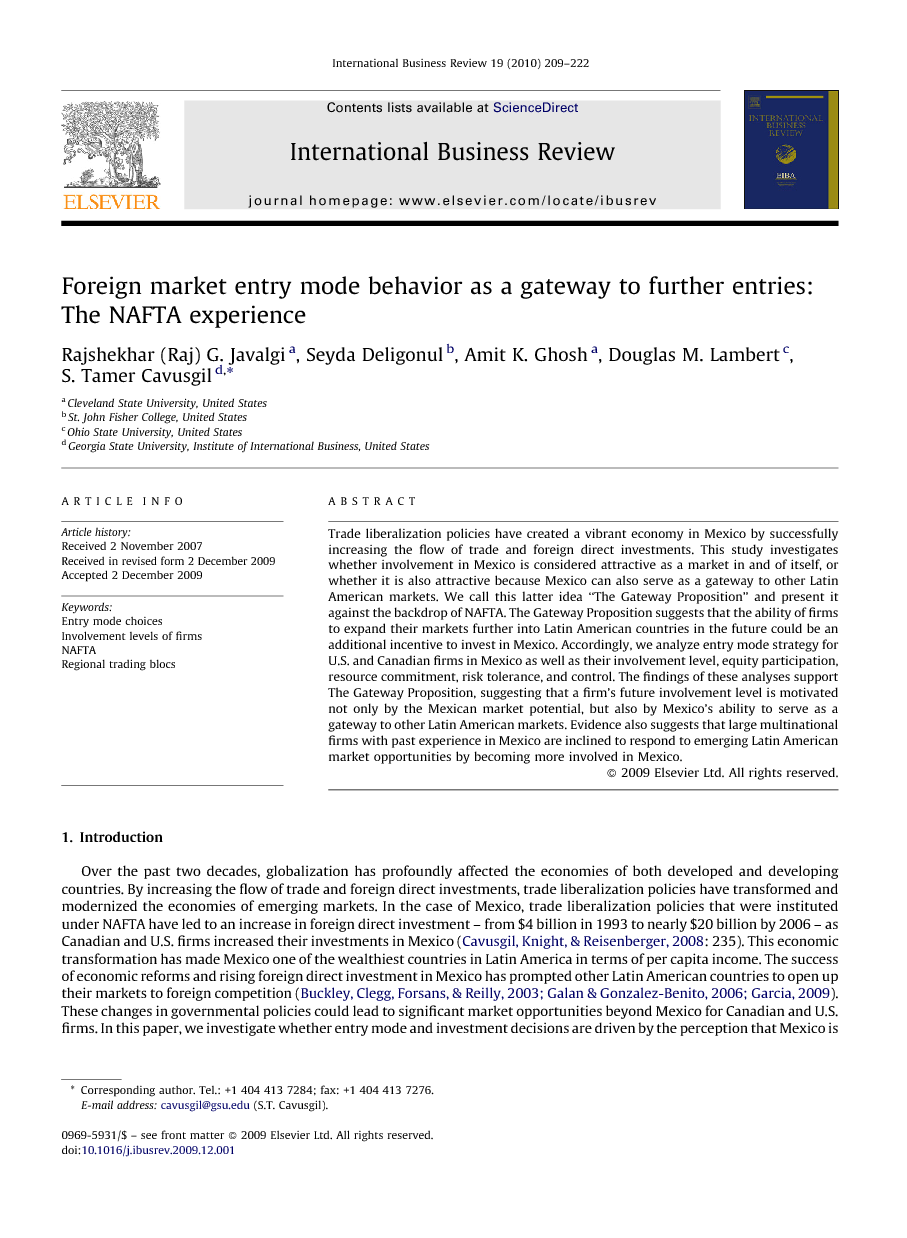 Trade liberalization policies have created a vibrant economy in Mexico by successfully increasing the flow of trade and foreign direct investments. This study investigates whether involvement in Mexico is considered attractive as a market in and of itself, or whether it is also attractive because Mexico can also serve as a gateway to other Latin American markets. We call this latter idea “The Gateway Proposition” and present it against the backdrop of NAFTA. The Gateway Proposition suggests that the ability of firms to expand their markets further into Latin American countries in the future could be an additional incentive to invest in Mexico. Accordingly, we analyze entry mode strategy for U.S. and Canadian firms in Mexico as well as their involvement level, equity participation, resource commitment, risk tolerance, and control. The findings of these analyses support The Gateway Proposition, suggesting that a firm's future involvement level is motivated not only by the Mexican market potential, but also by Mexico's ability to serve as a gateway to other Latin American markets. Evidence also suggests that large multinational firms with past experience in Mexico are inclined to respond to emerging Latin American market opportunities by becoming more involved in Mexico.

Over the past two decades, globalization has profoundly affected the economies of both developed and developing countries. By increasing the flow of trade and foreign direct investments, trade liberalization policies have transformed and modernized the economies of emerging markets. In the case of Mexico, trade liberalization policies that were instituted under NAFTA have led to an increase in foreign direct investment – from $4 billion in 1993 to nearly $20 billion by 2006 – as Canadian and U.S. firms increased their investments in Mexico (Cavusgil, Knight, & Reisenberger, 2008: 235). This economic transformation has made Mexico one of the wealthiest countries in Latin America in terms of per capita income. The success of economic reforms and rising foreign direct investment in Mexico has prompted other Latin American countries to open up their markets to foreign competition (Buckley et al., 2003, Galan and Gonzalez-Benito, 2006 and Garcia, 2009). These changes in governmental policies could lead to significant market opportunities beyond Mexico for Canadian and U.S. firms. In this paper, we investigate whether entry mode and investment decisions are driven by the perception that Mexico is an attractive target market in and of itself, or whether such decisions could be also due to Mexico's ability to serve as a gateway to other emerging markets in Latin America. The extant literature on entry mode decisions by firms has focused on general aspects of entry decisions at the firm level (Erramilli and Rao, 1993, Kim and Hwang, 1992, Kumar and Subramaniam, 1997 and Madhok, 1997), as well as on industry and country characteristics (e.g., Anderson and Gatignon, 1986, Galan and Gonzalez-Benito, 2006, Kogut and Singh, 1988, Rugman and Gestrin, 1993 and Tse et al., 1997). The patterns and determinants of entry mode have been explained by an eclectic set of factors (e.g., Canabal & White III, 2008). Past research has also emphasized the ownership and control issues implied by various modes of entry (Agarwal and Ramaswami, 1992, Contractor, 1990a, Erramilli, 1991, Hennart, 1991 and Hennart and Reddy, 1997), and the effect of factors such as cultural distance, country risk, and economic development on entry mode decisions (e.g., Cho and Radmanabhan, 1995, Gatignon and Anderson, 1988 and Kogut and Singh, 1988). While the past literature has identified several key factors that influence entry mode decisions, the issue of investing in a country because it can serve as a gateway to other emerging economies has not been addressed. In the context of Latin America, past studies have examined entry mode decisions to Mexico and other Latin American countries separately (Galan and Gonzalez-Benito, 2006 and Garcia, 2009). The potential for Mexico to serve as a gateway to other Latin American countries, however, has drawn only scant attention (Richardson, 1993). One of the contributions of this study is that the attractiveness of Mexico as a final market is treated separately from its attractiveness to serve as a gateway to other Latin American markets. This distinction is critical, since some Latin American countries have also instituted aggressive economic reforms (Porzecanski & Gallagher, 2007), thus becoming more attractive to U.S. and Canadian firms. Our analysis extends the existing literature by showing a unique entry mode strategy based on the interplay of macro-policy considerations and micro-variables. We explore U.S. or Canadian firms’ current involvement level in Mexico and the factors that can contribute to their future intentions to invest in Latin America. Our investigation treats the entry to a foreign market and the mode of that entry under the multilateral macro-agreements. Garcia (2009) notes that, as a consequence of NAFTA, Mexican trade is highly concentrated within the North American bloc. The firms pursuing internationalization as a strategy and/or adopting it as an entrepreneurial perspective need to leverage their resources and look beyond the region or markets they currently serve (Anderson, 2000, McDougall, 1994 and Ruzzier et al., 2006). According to internationalization theory, firms could reduce risk by investing in markets that are close in terms of geography or culture and by entering foreign markets through such modes as acquisition (Daniels, Krug, & Trevino, 2007). We argue that trade liberalization agreements such as NAFTA may create a friendly business environment for the first entry, which provides experience and opportunities for further expansion into other countries that are culturally and economically connected to the first. By expanding into the neighboring markets, both U.S. and Canadian firms can access new markets, enhance production, and reduce costs (Garcia, 2009), thus enabling firms to achieve scope and scale to compete in the global environment. The rest of this article discusses the theoretical background, conceptual model and hypothesis development, and then describes the methodology and data. Finally, the findings and conclusions are discussed.

By reducing barriers to trade, NAFTA is expected to continue to increase the growth potential of the Mexican market. Mexico, both as a final market and as a gateway to other growing Latin American markets, provides its NAFTA partners with a competitive edge. The edge, however, depends on a firm's involvement in Mexico. Involvement, in turn, is related to the characteristics of a firm and to its managerial perceptions of the attractiveness of the Mexican and larger Latin American markets. Results of this study suggest that current involvement of U.S. and Canadian firms in Mexico is influenced primarily by the perceived growth prospects of the Mexican market. Future involvement, in contrast, is affected by Mexico's ability to serve not only as a “final destination,” but also as a gateway to other Latin American markets. The Gateway Hypothesis, which is empirically confirmed in this study, involves consideration of future expectations when venturing into a new foreign market. The backbone of the proposition is that the first experience may turn into a stepping-stone-entry which initiates further entry decisions in related markets. This type of entry is expected especially when a macro-level agreement such as NAFTA incentivizes the focal company with such drivers as less volatility, increased stability, higher predictability, lower exposure to exchange risk, and improved transparency. Indeed, when an entrant firm steps into a familiar and stabilized environment, a higher investment commitment and better learning ensue. Under those conditions, as in the case of Mexico and NAFTA, the first successful entry becomes a possible prelude for extending the focal company's attempt to further entry options. This study suggests an important aspect of entry mode literature. Specifically, it shows that entry decisions, in some cases, require the examination of the interplay of country-level factors and of company-level variables. Such interaction will not be captured unless the external factors in the target market are included into the study as endogenous macro-policy factors. Also, this study considers the possibility of drawing entrants into new markets by paving the way with macro-NAFTA-like agreements so that the focal company's earlier experience furthers its expansion into culturally and economically connected targets. Our study indicates that, in addition to macro-incentives relevant to The Gateway Proposition, there are other inducements. The entrant firm's current involvement level in the target market is one; the variables that contribute to future intentions to invest in related countries are also important. However, several limitations of this study must be noted. The present investigation does not explicitly consider Mexico's other locational advantages (e.g., cheap labor force) or disadvantages (e.g., inferior technological and logistical infrastructure). The impact of these factors on a firm's involvement level remains to be investigated. As has been the case in past studies (Anderson and Coughlan, 1987 and Chung and Enderwick, 2001), it was not possible to include all the relevant factors in a single study. Increasing the scope of this study to investigate the investment philosophies of European, Asian, and Pacific Rim firms in Mexico could yield interesting results. We did not explore what makes a market “attractive,” nor did we scrutinize the reasons that firms might like to expand into the Latin American market. An analysis of these factors will offer a better understanding of the globalization strategies of Canadian and U.S. firms.