عنوان انگلیسی
The distributional effects of NAFTA in Mexico: Evidence from a panel of municipalities
دانلود فوری مقاله + سفارش ترجمه 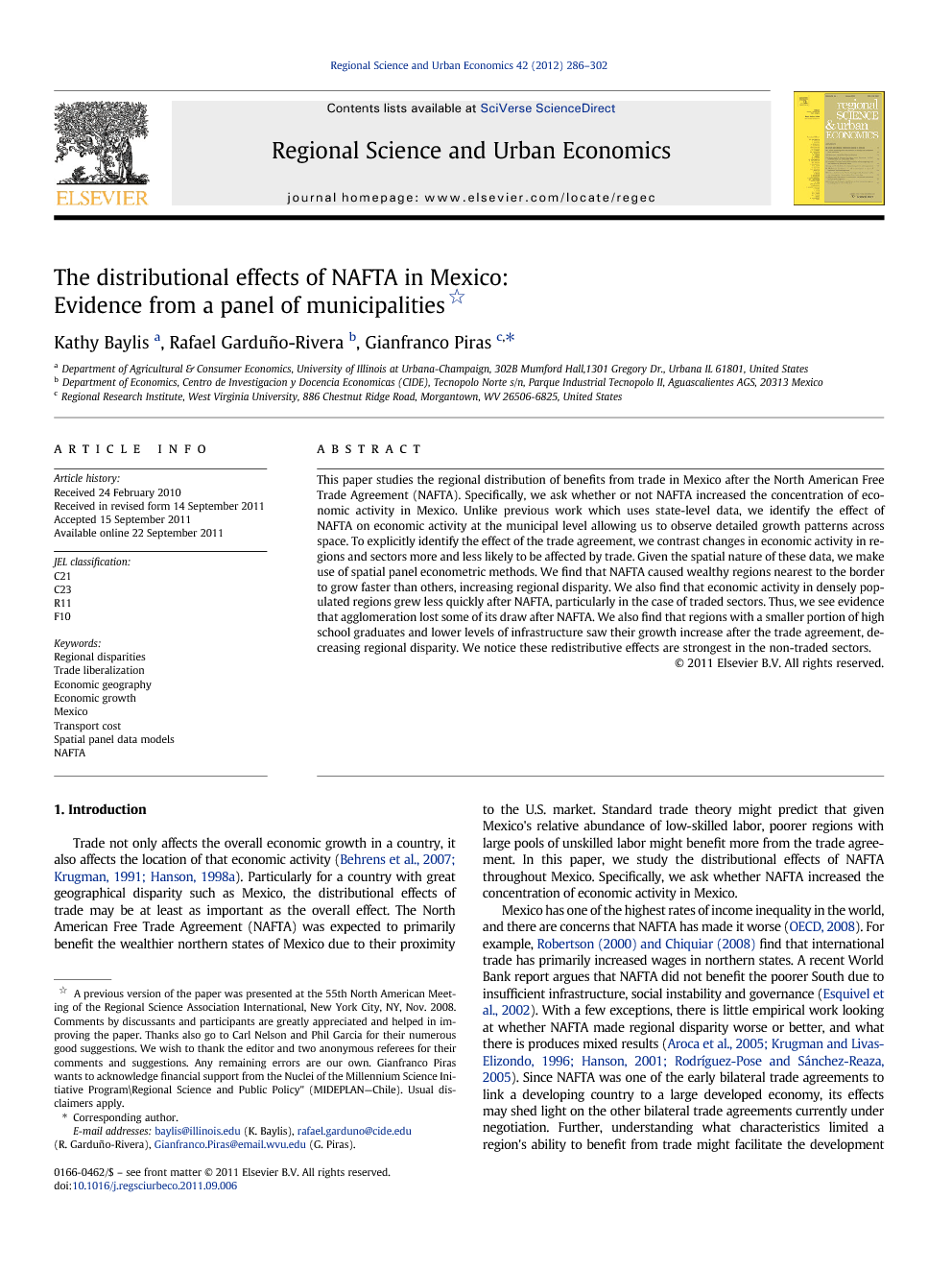 This paper studies the regional distribution of benefits from trade in Mexico after the North American Free Trade Agreement (NAFTA). Specifically, we ask whether or not NAFTA increased the concentration of economic activity in Mexico. Unlike previous work which uses state-level data, we identify the effect of NAFTA on economic activity at the municipal level allowing us to observe detailed growth patterns across space. To explicitly identify the effect of the trade agreement, we contrast changes in economic activity in regions and sectors more and less likely to be affected by trade. Given the spatial nature of these data, we make use of spatial panel econometric methods. We find that NAFTA caused wealthy regions nearest to the border to grow faster than others, increasing regional disparity. We also find that economic activity in densely populated regions grew less quickly after NAFTA, particularly in the case of traded sectors. Thus, we see evidence that agglomeration lost some of its draw after NAFTA. We also find that regions with a smaller portion of high school graduates and lower levels of infrastructure saw their growth increase after the trade agreement, decreasing regional disparity. We notice these redistributive effects are strongest in the non-traded sectors.

Trade not only affects the overall economic growth in a country, it also affects the location of that economic activity (Behrens et al., 2007, Krugman, 1991 and Hanson, 1998a). Particularly for a country with great geographical disparity such as Mexico, the distributional effects of trade may be at least as important as the overall effect. The North American Free Trade Agreement (NAFTA) was expected to primarily benefit the wealthier northern states of Mexico due to their proximity to the U.S. market. Standard trade theory might predict that given Mexico's relative abundance of low-skilled labor, poorer regions with large pools of unskilled labor might benefit more from the trade agreement. In this paper, we study the distributional effects of NAFTA throughout Mexico. Specifically, we ask whether NAFTA increased the concentration of economic activity in Mexico. Mexico has one of the highest rates of income inequality in the world, and there are concerns that NAFTA has made it worse (OECD, 2008). For example, Robertson, 2000 and Chiquiar, 2008 find that international trade has primarily increased wages in northern states. A recent World Bank report argues that NAFTA did not benefit the poorer South due to insufficient infrastructure, social instability and governance (Esquivel et al., 2002). With a few exceptions, there is little empirical work looking at whether NAFTA made regional disparity worse or better, and what there is produces mixed results (Aroca et al., 2005, Krugman and Livas-Elizondo, 1996, Hanson, 2001 and Rodríguez-Pose and Sánchez-Reaza, 2005). Since NAFTA was one of the early bilateral trade agreements to link a developing country to a large developed economy, its effects may shed light on the other bilateral trade agreements currently under negotiation. Further, understanding what characteristics limited a region's ability to benefit from trade might facilitate the development of programs to give regions better access to the new export market, or, at a minimum, might allow for targeted compensation. The few empirical studies that have explicitly analyzed the geographic effect of NAFTA on economic activity in Mexico are limited in that they use state-level data. State-level data mask the spatial distribution of economic activity and severely restrict the number of observations. We believe this paper offers the following four contributions. First, we use municipal panel data to identify the relationship between trade and regional patterns of growth. The use of spatial panel data increases the number of observations as well as our ability to observe geographic patterns. Second, by separating economic activity into traded and non-traded goods, we can better identify the specific effect of trade. Third, we include the latest economic census (2004) to observe longer-term effects of NAFTA. Last, we explicitly control for the spatial nature of our data, and use newly-developed spatial panel data methods (Kapoor et al., 2007 and Piras, 2011).1 We find that NAFTA has increased the regional concentration of economic activity in Mexico. The output of regions near the border grows faster than those regions further from the United States after NAFTA, even when these border regions already had high levels of economic activity before the trade agreement. Second, we find that the benefits of NAFTA went disproportionately to less densely populated regions. This effect is particularly notable in the Mexico City region. Thus, within regions, we see some redistributive effects of NAFTA. Further, as might be predicted by a standard Heckscher-Ohlin model, we find that regions with lower rates of high-skilled labor benefit more from NAFTA. Similarly, regions with lower levels of infrastructure began to grow more quickly after NAFTA, implying a redistributive effect of these economic changes. To determine whether we can truly attribute these changes to NAFTA as opposed to other temporal effects, we split the data by region and by sector. We observe that the traded sectors, manufacturing and wholesale/retail, are affected most strongly by the pull of the border after NAFTA. For the non-traded sector, services, we see a tendency to redistribute activity further away from the United States. Additionally, unlike the other sectors, we observe more economic growth in the service sector in those municipalities with lower literacy rates after NAFTA. While overall we find that growth of the Mexican economy decelerated after NAFTA, the traded sectors fared better in terms of economic levels and growth rates after the trade agreement than the non-traded sectors. As expected, we find substantial spatial correlation in the level of municipal economic activity and their economic growth rates. In the next section, we look at the regional distribution of economic activity before and after NAFTA. Next, we review the trade literature and New Economic Geography that suggest which factors might affect this distribution. A presentation of our empirical model follows along with a description of the estimation technique and data. Results and conclusions end the paper.

The paper studies the regional distribution of the benefits from trade in Mexico after NAFTA. We identify the effect of NAFTA by considering changes in economic growth and activity in regions and sectors more likely to be affected by trade compared to those without. We find that Mexico's trade liberalization via NAFTA has caused important changes in the location of economic activity. Although regional disparities have existed in Mexico since industrialization began in the 1930s (López Malo, 1960), NAFTA may have exacerbated these trends among regions, concentrating growth in regions that already had larger GVA: specifically in the north. That said, we observe some evidence that NAFTA has decreased the agglomeration effect, reducing the pull of urban centers, particularly Mexico City, and therefore redistributing economic activity within regions. Overall, we find that trade liberalization has not reduced territorial disparities, but rather led to a greater regional polarization within Mexico. While Mexican municipalities close to the U.S. market have profited from integration by increasing their production and incomes, regions further away from the United States have become more disconnected from Mexico's integration into world markets. Specifically, we find that while NAFTA increased economic activity in a municipality at the border by 8%, it economy activity only increased by 0.1% for a municipality in the southern end of the country. However, north–south disparities are only one part of the story. Contrary to popular belief, we find more economic growth was generated in those regions with poorer infrastructure after NAFTA, decreasing the gap between regions with higher levels of drainage and electricity and those without. Similarly, like Chiquiar (2008) we find evidence for the Stolper–Samuelson theorem, that those regions with higher percentages of lower-skilled workers, defined as those without high school education, benefited after the trade agreement. That said, those poorest regions with high rates of illiteracy fared even worse after the trade agreement. Notably, these results are observed in the changes in growth rates, not levels, implying it may be several more years before these municipalities can close the gap with their wealthier neighbors. To ascertain whether the change in the location of economic activity is truly associated with NAFTA or merely an outcome of other temporal effects, we divide the data by industry sector. We find that the changes we attribute to the trade agreement in the total GVA regression are most pronounced in the traded sectors. Specifically, the U.S. border has the largest effect on economic activity and growth in manufacturing and commerce. While, as in manufacturing, the benefits of NAFTA in the wholesale/retail sector are also concentrated in the north, we see the growth in this activity moving out of urban centers after NAFTA, particularly in the north and center of the country, while manufacturing growth is still drawn to urban areas near the border. That said, like wholesale/retail, manufacturing grows at a slower rate in urban centers in the rest of the country after NAFTA. We observe a very different pattern for the non-traded sector of services. The border appears to have, if anything a repellant effect for the service sector after NAFTA. Further, growth in the service sector is also the one industry that is not largely driven away from densely populated areas after the trade agreement. We also see manufacturing and wholesale/retail concentrating in those areas with more literate labor. This distribution is different for the non-traded sector. Specifically, it appears as if services in particular are being driven out of regions with more literate labor after the trade agreement. Thus, it appears as if the redistributive effect of NAFTA is coming from a displacement of the non-traded sectors, while the traded sectors are if anything being concentrated in wealthier regions. In summary, we find evidence supporting the claim that NAFTA's benefits primarily went to those regions already doing well economically, but that within regions, NAFTA appeared to decrease the draw of agglomeration. Thus, if a government objective is to reduce economic disparity, one can argue that there is a need for redistributive policies to go alongside trade agreements. That said, regional development policy might try to make use of the fact that non-traded sectors appear to be willing to move to poorer regions, mitigating some of the economic disparity enhanced by trade.