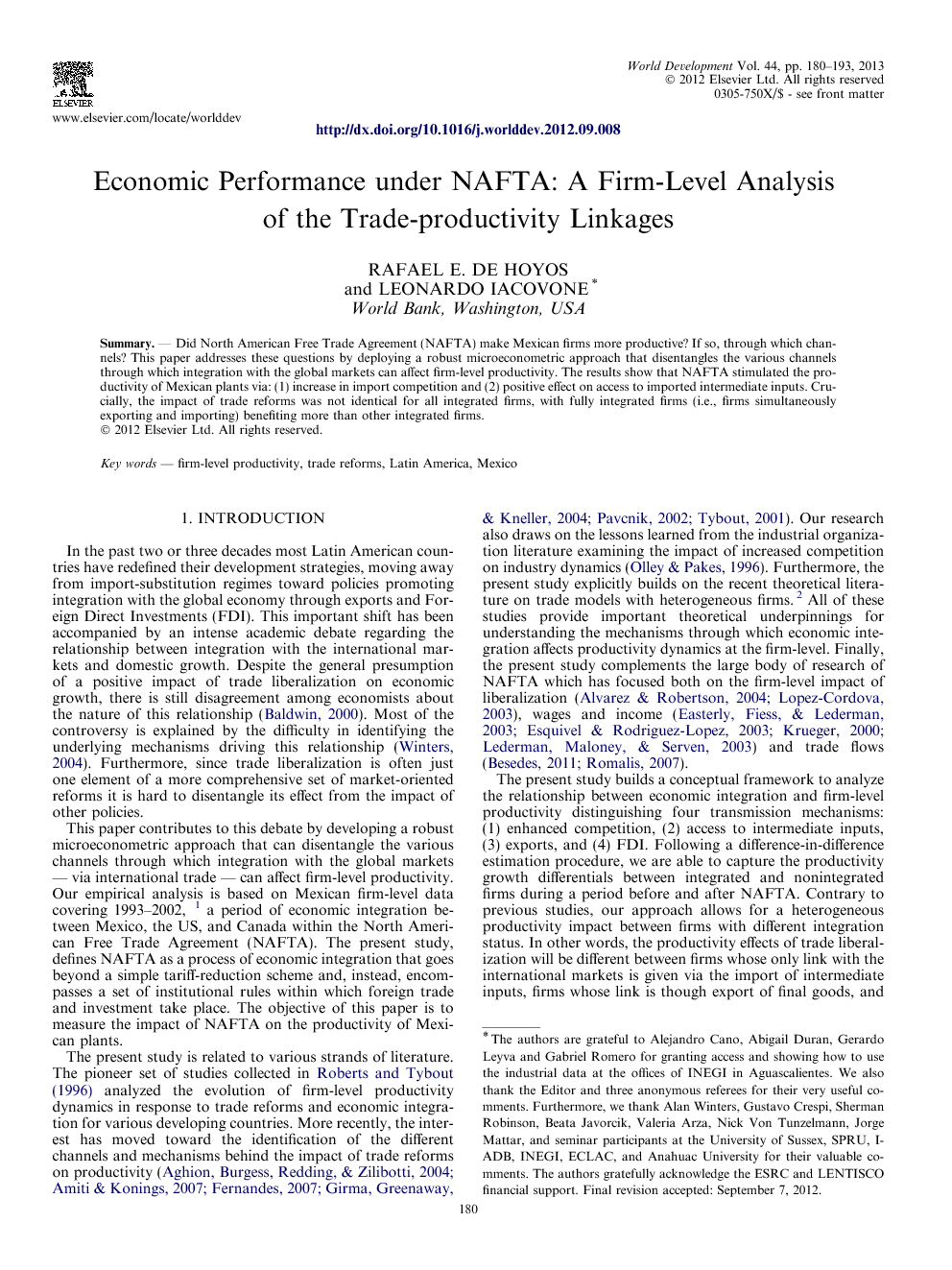 Did North American Free Trade Agreement (NAFTA) make Mexican firms more productive? If so, through which channels? This paper addresses these questions by deploying a robust microeconometric approach that disentangles the various channels through which integration with the global markets can affect firm-level productivity. The results show that NAFTA stimulated the productivity of Mexican plants via: (1) increase in import competition and (2) positive effect on access to imported intermediate inputs. Crucially, the impact of trade reforms was not identical for all integrated firms, with fully integrated firms (i.e., firms simultaneously exporting and importing) benefiting more than other integrated firms.

In the past two or three decades most Latin American countries have redefined their development strategies, moving away from import-substitution regimes toward policies promoting integration with the global economy through exports and Foreign Direct Investments (FDI). This important shift has been accompanied by an intense academic debate regarding the relationship between integration with the international markets and domestic growth. Despite the general presumption of a positive impact of trade liberalization on economic growth, there is still disagreement among economists about the nature of this relationship (Baldwin, 2000). Most of the controversy is explained by the difficulty in identifying the underlying mechanisms driving this relationship (Winters, 2004). Furthermore, since trade liberalization is often just one element of a more comprehensive set of market-oriented reforms it is hard to disentangle its effect from the impact of other policies. This paper contributes to this debate by developing a robust microeconometric approach that can disentangle the various channels through which integration with the global markets — via international trade — can affect firm-level productivity. Our empirical analysis is based on Mexican firm-level data covering 1993–2002, 1 a period of economic integration between Mexico, the US, and Canada within the North American Free Trade Agreement (NAFTA). The present study, defines NAFTA as a process of economic integration that goes beyond a simple tariff-reduction scheme and, instead, encompasses a set of institutional rules within which foreign trade and investment take place. The objective of this paper is to measure the impact of NAFTA on the productivity of Mexican plants. The present study is related to various strands of literature. The pioneer set of studies collected in Roberts and Tybout (1996) analyzed the evolution of firm-level productivity dynamics in response to trade reforms and economic integration for various developing countries. More recently, the interest has moved toward the identification of the different channels and mechanisms behind the impact of trade reforms on productivity (Aghion et al.’s, 2004, Amiti and Konings’s, 2007, Fernandes’s, 2007, Girma et al.’s, 2004, Pavcnik’s, 2002 and Tybout’s, 2001). Our research also draws on the lessons learned from the industrial organization literature examining the impact of increased competition on industry dynamics (Olley & Pakes, 1996). Furthermore, the present study explicitly builds on the recent theoretical literature on trade models with heterogeneous firms.2 All of these studies provide important theoretical underpinnings for understanding the mechanisms through which economic integration affects productivity dynamics at the firm-level. Finally, the present study complements the large body of research of NAFTA which has focused both on the firm-level impact of liberalization (Alvarez and Robertson’s, 2004 and Lopez-Cordova’s, 2003), wages and income (Easterly et al.’s, 2003, Esquivel and Rodriguez-Lopez’s, 2003, Krueger’s, 2000 and Lederman et al.’s, 2003) and trade flows (Besedes’s, 2011 and Romalis’s, 2007). The present study builds a conceptual framework to analyze the relationship between economic integration and firm-level productivity distinguishing four transmission mechanisms: (1) enhanced competition, (2) access to intermediate inputs, (3) exports, and (4) FDI. Following a difference-in-difference estimation procedure, we are able to capture the productivity growth differentials between integrated and nonintegrated firms during a period before and after NAFTA. Contrary to previous studies, our approach allows for a heterogeneous productivity impact between firms with different integration status. In other words, the productivity effects of trade liberalization will be different between firms whose only link with the international markets is given via the import of intermediate inputs, firms whose link is though export of final goods, and firms that are importing inputs and exporting the final produce, that is, fully integrated firms. Our results show that NAFTA stimulated the productivity of Mexican plants via: (1) an increase in import competition and (2) a positive effect on access to imported intermediate inputs. However, the impact of trade reforms was not identical for all integrated firms with fully integrated firms benefiting more than other integrated firms. Contrary to previous results, once self-selection problems are solved, we find a rather weak relationship between exports and productivity growth. The paper is organized as follows: Section 2 briefly develops the conceptual framework describing the different trade-productivity transmission channels. The data used for the empirical analysis, Mexico’s macroeconomic background, and trends in firm-level productivity are shown in Section 3. Section 4 describes our econometric approach and shows the results of various specifications. This Section also discusses potential endogeneity and selection problems, as well as the difficulties in isolating the impact of NAFTA from the peso devaluation of 1994. Finally, Section 5 concludes.

This paper answers two questions: (1) Did NAFTA reforms make Mexican plants more productive? (2) If so, through which channels? As opposed to previous studies, we have been able to identify the trade integration status at the firm level and not at the sectoral level (Pavcnik, 2002). Also, improving on previous studies that analyze the impact of NAFTA, we have attempted to identify an “overall NAFTA impact” (through the various channels) and not just the impact of tariff changes (Lopez-Cordova, 2003). Furthermore, our empirical analysis overcomes two principal hurdles: endogeneity and potential sample selection bias. A further complication was generated by the timing of the peso’s devaluation, which occurred in December 1994 and overlapped with the period of implementation of NAFTA enacted in January 1994. The papers tries to tackle all these empirical issues and our results appear to be robust and not driven by these issues. The results of this paper confirm the importance of the import-competition channel. As previously suggested in various empirical studies (Fernandes’s, 2007, Pavcnik’s, 2002 and Tybout and Westbrook’s, 1995), an increase in import competition, measured by a reduction of import tariffs under NAFTA, had a positive effect on stimulating the productivity of Mexican plants. We also found that the impact of trade reforms is not identical for all integrated plants. Consequently, it is important to distinguish between firms based on the way these are actually integrated to the international markets. In fact, we found that the benefits to firms that are fully integrated are normally larger than the benefits accruing to other types of integrated firms. In contrast with the findings of Lopez-Cordova (2003) but in line with some more recent studies (Amiti and Konings’s, 2007 and Blalock and Veloso’s, 2007), our results suggest that imported intermediate inputs can be a crucial source of productivity growth for firms, and trade reforms that enhance access to these inputs can be an important source of a country’s competitiveness. As it was the case in (Bernard and Bradford Jensen’s, 1999 and Pavcnik’s, 2002), we cannot find evidence that exporting is a channel of productivity growth. However, a possible explanation for the lack of evident improvements in the productivity growth of exporters, as opposed to importers, could be that the extra market access for Mexican exporters after NAFTA has been modest given that US tariffs were already low. In contrast, the changes for importers have been more substantial. Furthermore, with the boom in FDI and the expansion of exports after NAFTA, many of the importers may have found themselves in the new situation of having to supply MNCs or exporters with far higher demand standards. The process of catching up with these new demands may be an important explanation behind the significant productivity growth of importers. Unfortunately, we have no hard evidence to support this hypothesis except some facts presented in our descriptive analysis (Section 3). Finally, consistent with various previous studies (Djankov and Hoekman’s, 2000 and Evenett and Voicu’s, 2001), the FDI channel also appears to be an important source of productivity growth for plants acquired, or with participation shares, by MNCs. However, data limitations do not allow us to investigate this channel in more detail because the data only allow us to identify the foreign ownership of Mexican plants in 1994. For this reason, we decided not to pursue further the study of the impact of FDI and the potential vertical and horizontal spillovers in this study, even if we are aware of their importance as drivers of productivity changes in Mexico during the period under analysis.