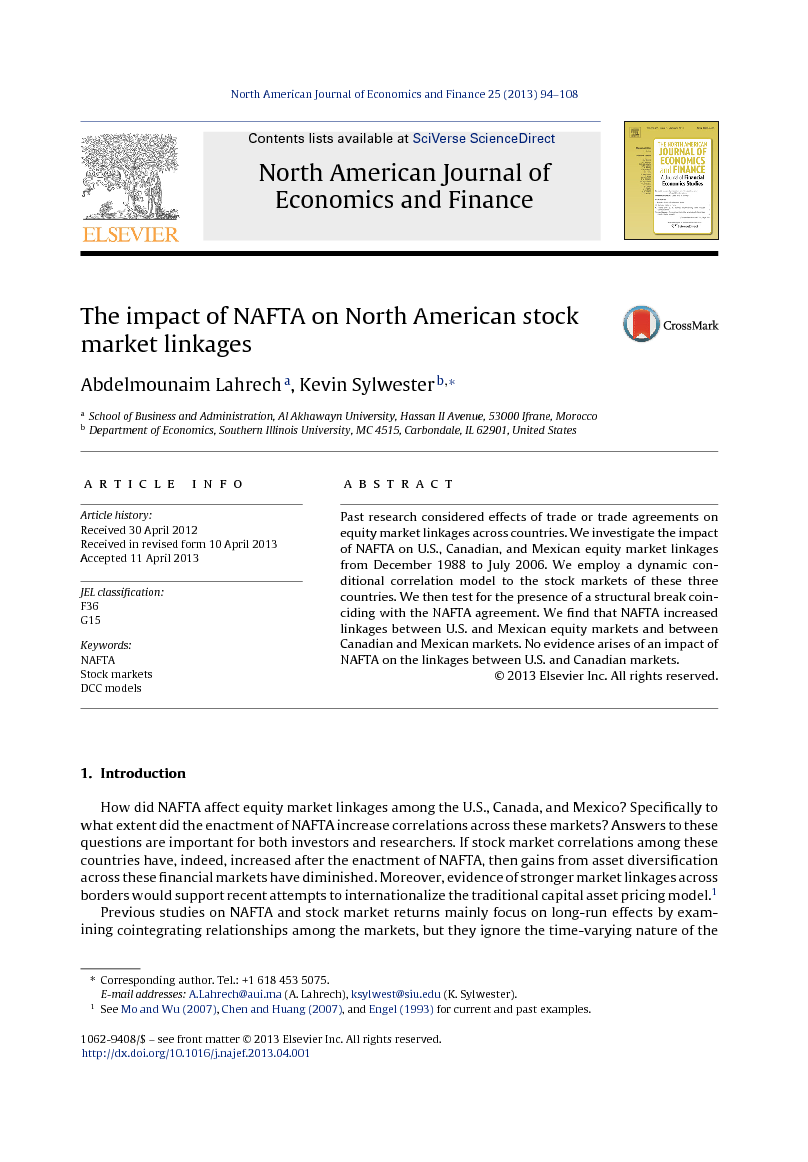 Past research considered effects of trade or trade agreements on equity market linkages across countries. We investigate the impact of NAFTA on U.S., Canadian, and Mexican equity market linkages from December 1988 to July 2006. We employ a dynamic conditional correlation model to the stock markets of these three countries. We then test for the presence of a structural break coinciding with the NAFTA agreement. We find that NAFTA increased linkages between U.S. and Mexican equity markets and between Canadian and Mexican markets. No evidence arises of an impact of NAFTA on the linkages between U.S. and Canadian markets.

How did NAFTA affect equity market linkages among the U.S., Canada, and Mexico? Specifically to what extent did the enactment of NAFTA increase correlations across these markets? Answers to these questions are important for both investors and researchers. If stock market correlations among these countries have, indeed, increased after the enactment of NAFTA, then gains from asset diversification across these financial markets have diminished. Moreover, evidence of stronger market linkages across borders would support recent attempts to internationalize the traditional capital asset pricing model.1 Previous studies on NAFTA and stock market returns mainly focus on long-run effects by examining cointegrating relationships among the markets, but they ignore the time-varying nature of the correlations. For example, using a cointegration and error correction model Darrat and Zhong (2005) examine the effect of NAFTA on the degree of equity market co-movements and find that NAFTA increased equity market linkages.2 Moreover, they find that the stronger linkages across goods markets in a region provide the main reason behind the stronger equity market linkage observed in the post-NAFTA period. Aggarwal and Kyaw (2005) report that a cointegrating relationship exists among the equity prices of Canada, Mexico, and the U.S. only for the post-NAFTA period. Phengpis and Swanson (2006) also find that diversification opportunities have diminished since NAFTA due to greater interdependencies across these three markets. However, Ciner (2006) argues that the existence of a post-NAFTA cointegrating relationship arises solely from the integration of these markets in the late 1990s and is not general to the entirety of the post-NAFTA period. Ciner (2006) further reports that what drove these linkages was the information technology boom of the late 1990s. Ewing, Payne, and Sowell (1999) also did not find a cointegrating relationship among these markets even when NAFTA is taken into account and so find no effect of NAFTA on the integration of these markets.3 On the other hand, Ewing, Payne, and Sowell (2001) examine the transmission of stock return volatility across North American markets during the pre- and post-NAFTA periods using ARCH and VAR models. They find that the passage of NAFTA increased the degree to which these markets are integrated. In this study we examine the impact of NAFTA on linkages among the U.S., Canadian, and Mexican equity markets using a different econometric methodology. Equity market integration is examined using an asymmetric version of the dynamic conditional correlation (DCC) model of Engle (2002). Such a model was used by Cappiello, Engle, and Sheppard (2006) to investigate the asymmetric dynamics in correlation of global equity and bond returns. This model estimates the DCC parameters and the time-varying conditional correlation among the returns taking into account asymmetries in correlation in addition to asymmetries in the variances of individual series. We estimate these conditional correlations over time for each of the three pairings among the equity markets of Canada, Mexico, and the U.S. This application differs from co-integration techniques that examine whether multiple series move together in the long run. Instead, DCC approaches focus on how correlations across markets evolve over time, including in the short run after temporary shocks. One could also allow correlations to evolve over time calculating them similarly to a moving average where one calculates the correlation at time t using market returns in the previous n periods. However, a disadvantage of this procedure is that it weights all pairs of returns in the previous n periods equally while giving zero weight to returns prior to period t − n. In considering various equity, bond, and foreign exchange markets, Engle (2002) reports that such a moving average performs the least well compared to alternatives, including DCC models. To evaluate the impact of NAFTA on these conditional correlations, we follow Cappiello et al. (2006) and extend the model to allow for a possible structural break, such as occurred with the enactment of NAFTA, in these estimated correlations. Maghyereh and Al-Zuobi (2005) use a DCC model with a structural break to show that correlations between the Jordanian and U.S. equity markets have increased after entering a free trade agreement.4 Although not using DCC models, past research has also considered how trade flows influence equity market linkages across countries (Taylor & Tonks, 1989). Forbes and Chinn (2004) also find that bilateral trade flows create important links from shocks in large economies to financial markets in other countries. Beine and Candelon (2007) report that greater trade openness and financial liberalizations increase stock market co-movements across emerging economies. Presumably, these greater linkages influence correlations across markets. Other studies consider how trade flows increase business cycle synchronization by developing greater connections between the two economies (Frankel & Rose, 1998).5Torres and Vela (2003) find that synchronization has increased between the Mexican and U.S. business cycle as the manufacturing sectors of the two countries have become more integrated. Such convergence of business cycles should also raise correlations across equity markets. Although not the most important factor, Fratzscher (2001) finds that convergence among the real economies in the EMU has led to greater financial integration. Still others examine how the state of the business cycle influences spillovers among stock markets. Bialkowski, Bohl, and Serwa (2006) find that spillovers are more frequent during turbulent periods, suggesting that correlations increase in these periods. The rest of the paper is divided into four sections. Section 2 presents the methodology. Section 3 describes the data and presents summary statistics. Section 4 analyzes the results. Section 5 concludes.

This paper examined to what extent NAFTA has increased integration among the U.S., Canadian, and Mexican equity markets. We find an increase in the conditional correlations across these markets in the post-NAFTA period for U.S.–Mexico and Canada–Mexico but not for Canada–U.S. A possible explanation (but one that this paper did not formally consider) for the different outcome for the U.S. and Canada is that these countries had previously entered into a trading agreement in 1989 and so the marginal impact of NAFTA on links between the two could have been small. But with respect to the U.S. and Mexico as well as to Canada and Mexico, our findings support arguments that trade flows are important determinants of cross-country linkages in equity markets. Rising correlations between Mexico and its northern neighbors suggest that opportunities by investors to diversify across these markets have diminished. A possible extension of the paper would be to model the conditional correlation between the Canadian and the U.S. weekly equity returns allowing for two structural breaks, one when the U.S.–Canadian free trade agreement (1989) was signed and the other when NAFTA was signed. Of course, one needs more data prior to 1989 to conduct this analysis. Another extension would test for structural breaks in other dynamic properties of the correlations and not just in their means. Perhaps trade agreements can influence other moments in these time series than just the first moment. These two extensions will be the subject of our future research.