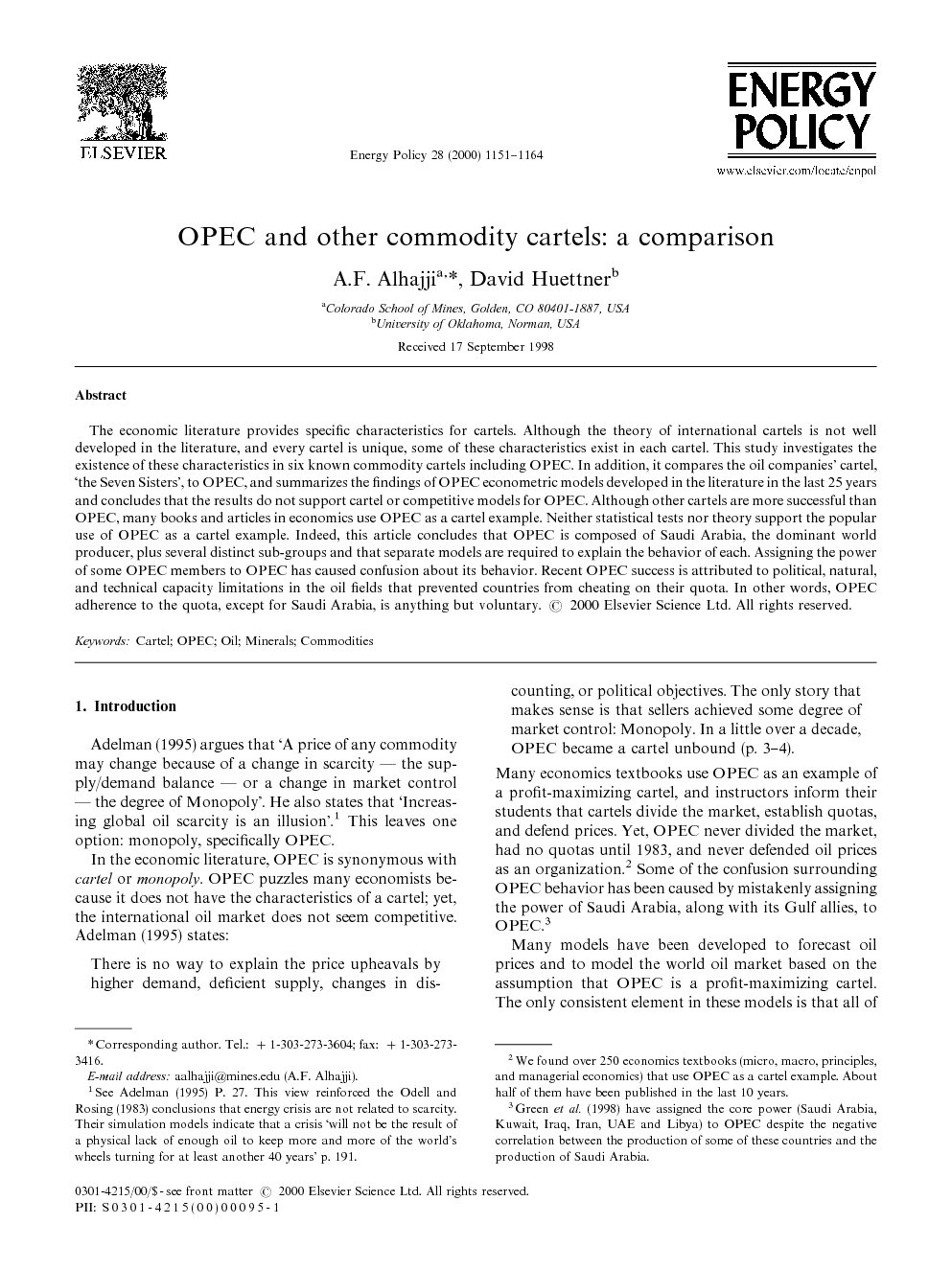 The economic literature provides specific characteristics for cartels. Although the theory of international cartels is not well developed in the literature, and every cartel is unique, some of these characteristics exist in each cartel. This study investigates the existence of these characteristics in six known commodity cartels including OPEC. In addition, it compares the oil companies’ cartel, `the Seven Sisters', to OPEC, and summarizes the findings of OPEC econometric models developed in the literature in the last 25 years and concludes that the results do not support cartel or competitive models for OPEC. Although other cartels are more successful than OPEC, many books and articles in economics use OPEC as a cartel example. Neither statistical tests nor theory support the popular use of OPEC as a cartel example. Indeed, this article concludes that OPEC is composed of Saudi Arabia, the dominant world producer, plus several distinct sub-groups and that separate models are required to explain the behavior of each. Assigning the power of some OPEC members to OPEC has caused confusion about its behavior. Recent OPEC success is attributed to political, natural, and technical capacity limitations in the oil fields that prevented countries from cheating on their quota. In other words, OPEC adherence to the quota, except for Saudi Arabia, is anything but voluntary.

Adelman (1995) argues that `A price of any commodity may change because of a change in scarcity — the supply/demand balance — or a change in market control — the degree of Monopoly'. He also states that `Increasing global oil scarcity is an illusion'.1 This leaves one option: monopoly, specifically OPEC. In the economic literature, OPEC is synonymous with cartel or monopoly. OPEC puzzles many economists because it does not have the characteristics of a cartel; yet, the international oil market does not seem competitive. Adelman (1995) states: There is no way to explain the price upheavals by higher demand, deficient supply, changes in discounting, or political objectives. The only story that makes sense is that sellers achieved some degree of market control: Monopoly. In a little over a decade, OPEC became a cartel unbound (p. 3–4). Many economics textbooks use OPEC as an example of a profit-maximizing cartel, and instructors inform their students that cartels divide the market, establish quotas, and defend prices. Yet, OPEC never divided the market, had no quotas until 1983, and never defended oil prices as an organization. 2 Some of the confusion surrounding OPEC behavior has been caused by mistakenly assigning the power of Saudi Arabia, along with its Gulf allies, to OPEC. 3 Many models have been developed to forecast oil prices and to model the world oil market based on the assumption that OPEC is a profit-maximizing cartel. The only consistent element in these models is that all of them failed in their forecasts and predictions.4 A few studies argued that OPEC did not fit the cartel model but this part of the literature is underdeveloped because of the widespread assumption that OPEC is a cartel. The failure of the cartel approach suggests that non-cartel approaches are needed to explain the oil market A profit-maximizing cartel is an organized group of producers formed to obtain higher prices by restricting production or dividing the market. To achieve its ends, the cartel usually controls production and thus limits market supply.5 Using the basic attributes of a cartel, this study compares OPEC with six other commodity cartels. In addition, it provides a non-monopoly explanation of wealth transfer to OPEC members, and it concludes that several models are needed to explain OPEC behavior. Section 2 of this study summarizes the literature. Section 3 compares OPEC to five other commodity cartels. Section 4 compares OPEC and the `Seven Sisters’ oil companies cartel that was established in 1928 and continued through the 1960s. Section 5 discusses the relationship between elasticity of demand and profit maximization. Section 6 reviews the results of econometric tests of OPEC behavior. Finally, Section 7 summarizes the conclusions.

This study outlines the differences between OPEC and other international commodity cartels. The theory of cartels as developed in the economic literature does not fit OPEC very well, particularly in comparison with the fit obtained for other commodity organizations. This study shows that none of the requisite six characteristics of cartels clearly exist in OPEC: quota system, monitoring system, punishment mechanism, cartel authority, side payments/buffer stocks, and large market share. OPEC may meet some of the characteristics partially since it now has a quota system; some members have excess capacity, some large producers may have `undeclared power,’ one large producer defends price occasionally, a recent, but weak, monitoring system exists, and, according to some economists, an undeclared punishment mechanism exists. The absence of a dominant OPEC market share, OPEC's overdependence on one commodity for revenue, and the fact that the elasticity of demand for OPEC's oil is less than one indicate that the use of OPEC as a cartel example in economics textbooks needs revision since other commodity cartels fit the cartel theory better than OPEC. Indeed, the oil companies’ cartel between the 1930 and 1960 fits the cartel theory much better than OPEC. The popularity of the use of OPEC as a cartel example may stem from the fact that politicians and economists alike were taken by surprise by the tremendous increase in oil prices in the 1970s and were not able to distinguish between the power of some members, such as Saudi Arabia, and OPEC as an organization. In addition, oil is a more strategic and visible commodity than other commodities, and it has a larger impact on the everyday life of everybody around the world. This study also summarizes the conclusions of previous econometric studies of OPEC. Several studies find no support for the cartel model. The econometric studies that support the cartel model are misleading because they prove parallel action but not cartilization. Parallel action may result in any market including a competitive market. Parallel action does not generally create a cartel wealth transfer, hence the presence of wealth transfer is an important confirmation of cartel power. We found that the wealth transfer to OPEC was caused by US oil price controls in the 1970s and supported by the market power of Saudi Arabia. Other commodity cartels were able to transfer large amounts of wealth for commodities not as strategic as oil. Overall, OPEC does not fit the theory of cartels, econometric testing does not support the cartel model for OPEC, OPEC elasticity of demand is less than one, and the wealth transfer to OPEC is explained by US price controls. Given these results, treating OPEC as monolithic cartel, as assumed in many studies and hundreds of economics textbooks, is not the correct approach. Dividing OPEC into many groups is more fruitful than studying OPEC as a whole. A few studies in the literature have divided OPEC into two or three groups. Although this division is appropriate, the criteria used to divide OPEC may not be correct since previous studies divided OPEC based on reserves and population. This arbitrary division has not improved modeling nor yielded improved predictions of OPEC behavior. Another flaw in OPEC modeling, including that of the authors, is that the analysis is based on the traditional theory of a cartel operating within one country's border. This approach ignores the international realties of economic sanctions and currency fluctuation as well as overdependence on one commodity for revenues. Future cartel modeling should contain an international dimension. This study demonstrates that Saudi Arabia is more influential than other OPEC members. Saudi Arabia meets all of the characteristics of a dominant producer by having relatively large market share, excess capacity, flexible behavior, the ability to move its price by increasing or decreasing production, and operating on the elastic part of its demand curve. No other OPEC member has similar behavior. Therefore, Saudi Arabia should be treated on its own within OPEC. Other OPEC members should be treated as small groups or on their own based on their political systems and their economies’ ability to absorb oil revenues. Sanctions on Iran and Libya suggest that these two countries constitute one sub-group. Foreign investment may play a role in identifying OPEC sub-groups and Kuwait should be treated independently. Imports of petroleum products or a small domestic refinery capacity may create another group that includes the UAE, Indonesia, and Venezuela. The authors believe this approach will provide a more convincing explanation of the behavior of oil prices in the world oil market given that differences among OPEC members, despite many similarities, are deep and have ended in two regional wars and many incidents of diplomatic disputes. Finally, given these differences among OPEC members, one can wonder why OPEC did not dissolve 15 years ago as the theory of cartels predicts? Two explanations are in order, lack of international dimension in the theory of cartels and the possibility that the benefits from OPEC membership outweigh the cost. OPEC's survival suggests that both may be valid. The advantages of OPEC membership may exceed the disadvantages, which may be minimal or non-existent. These advantages include: (1) OPEC meetings provide regular diplomatic channels between enemies (Iraq and Iran, Iraq and Kuwait, Libya and Saudi Arabia, Saudi Arabia and Qatar) where signals and threats are exchanged. (2) OPEC is also a research institution where experts from all countries work to study world energy markets and forecast prices. All members share the cost of this effort reducing the individual cost of research and information. (3) Some OPEC members are too small to influence world politics but their voices are heard through OPEC. Table options Given these advantages, one can ask why Ecuador and Gabon left OPEC? One explanation is that both countries have regular diplomatic relations with other OPEC members and both have oil reserves controled by foreign oil companies that make production decisions and operate their own research facilities. Therefore, they do not need to pay for something that they get free.