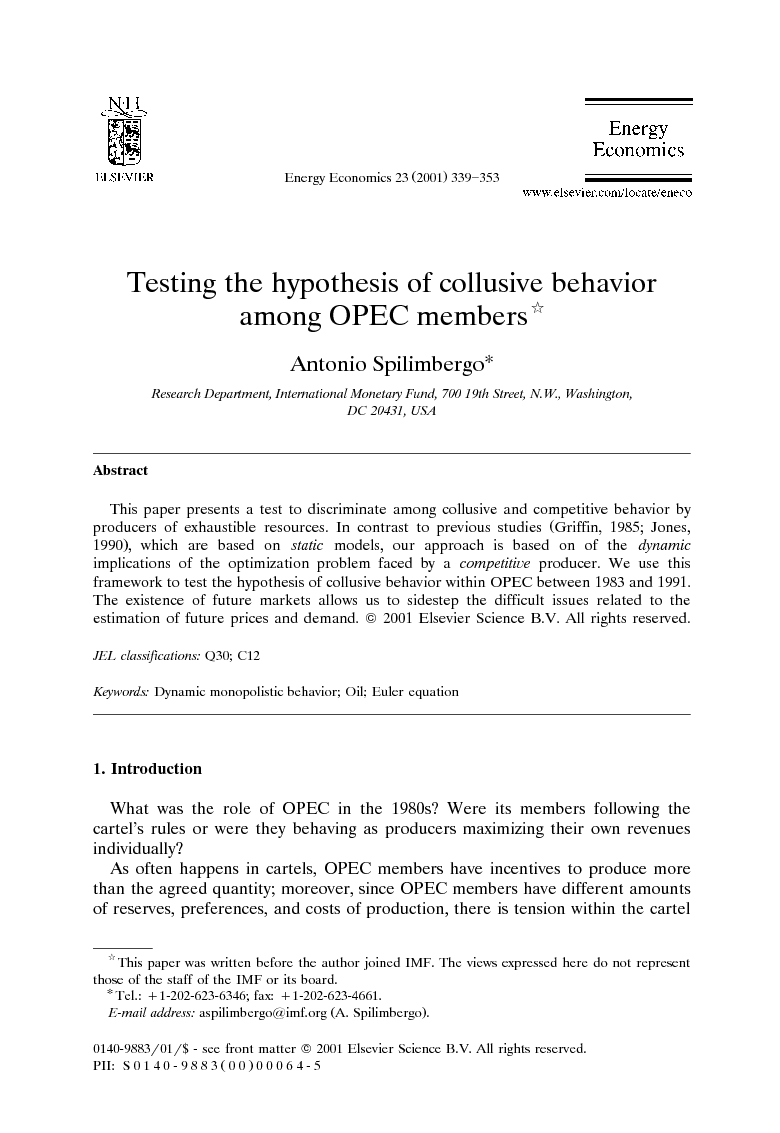 This paper presents a test to discriminate among collusive and competitive behavior by producers of exhaustible resources. In contrast to previous studies (Griffin, 1985; Jones, 1990), which are based on static models, our approach is based on of the dynamic implications of the optimization problem faced by a competitive producer. We use this framework to test the hypothesis of collusive behavior within OPEC between 1983 and 1991. The existence of future markets allows us to sidestep the difficult issues related to the estimation of future prices and demand.

What was the role of OPEC in the 1980s? Were its members following the cartel's rules or were they behaving as producers maximizing their own revenues individually? As often happens in cartels, OPEC members have incentives to produce more than the agreed quantity; moreover, since OPEC members have different amounts of reserves, preferences, and costs of production, there is tension within the cartel regarding the optimal price path. Several theoretical models have attempted to provide a framework for a country's production decisions. Griffin (1985) has sought to discriminate empirically between the static implications of the various theoretical models; in particular, he tested collusive behavior (where the production of each producer depends also on the OPEC production as a whole) against the hypothesis of a competitive market (where every producer maximizes its own revenues without strategic considerations). Using the same testing strategy, Jones (1990) finds that most OPEC members produce according to a ‘partial market sharing’. In this paper, we propose another way of testing strategic behavior against non-strategic behavior, based on the different dynamics implicit in the two models.

The purpose of this paper is to test alternative theories of OPEC behavior. In contrast to previous empirical studies (i.e. Griffin, 1985 and Jones, 1990), our approach is based on the possibility of testing the dynamic implications of the behavior of the competitive producer vs. the collusive producer. Following Griffin (1985) and Jones (1990), we have modeled the collusive behavior as a market-sharing cartel; our innovation is the modeling of the competitive behavior. Based on the fact that oil is an exhaustible, we model the behavior of a competitive producer using Euler equations. The use of a Euler equation has the advantage to sidestep the estimation of a demand function; the main drawback of estimating a Euler equation lies on the need to specify a utility function for the producers. However, the estimation of the paper is done under quite weak hypotheses on the specific shape of the utility function (the tests are valid for all the functional forms with constant relative of absolute risk aversion). The estimation of the Euler equation requires estimating Pt+1e. The first part of the paper deals with the problem of the adequacy of Pt and F1,t in forecasting Pt+1e. We have tested the presence of a unit root in the spot and in futures prices. The results are not conclusive because of the short period available. The tests for co-integration between spot and futures prices give clear results; the hypothesis of no co-integration is rejected at the 1% confidence level. The value of View the MathML source (which is an element of the co-integrating vector and economically represents the monthly expected excess return on oil) is 0.0179 (23.7% annually), quite a high value. In the second part of the paper, we have relied on the result that a linear combination of Pt and F1,t provides a sufficient and unbiased estimator for Pt+1e. Our findings are as follows. • We cannot reject the hypothesis of constant absolute risk aversion even at a 20% confidence level for all the countries except three (Venezuela, Qatar, Saudi Arabia). • We have test jointly the restrictions on parameters imposed by the structure of the model of rational expectations of the price [i.e. the coefficients of the terms (Pt·qt,i) and (Pt·qt+1,i) should be, respectively, −ρ and 1]. In this case we have used the estimated value View the MathML source. The test cannot reject the restrictions on parameters even at a 60% confidence level for some countries (Iran, Iraq, Nigeria). For some countries (Saudi Arabia, Libya, Qatar), however, the hypothesis is clearly rejected at a 1% confidence level. We wish to emphasize that the above findings constitute one of the main conclusions of this paper. • Finally, we have attempted to test the hypothesis of ‘competitive’ behavior against the alternative hypothesis of a cartel with a market-sharing agreement. The results indicate that, except for Saudi Arabia, the hypothesis of ‘market-sharing cartel’ can be rejected at a very high confidence level. However, this test has provided only weak evidence of the absence of collusive behavior because the alternative hypothesis (market-sharing agreement) is only one of the possible cartel agreements. Even though our specification of ‘partial market-sharing cartel’ is similar to that adopted by Griffin (1985) and Jones (1990), our findings are different. In all these regressions, Saudi Arabia has shown peculiar behavior.16 This is explained by the fact that Saudi Arabia is the largest producer in OPEC and the price of Saudi oil cannot be considered exogenous. On the other hand, Iraq, Iran, and Nigeria fit all the restrictions imposed by the model quite well — in particular, the restrictions imposed on the parameters in the second test (the hypothesis that these countries behave as dynamic profit maximizers with constant absolute risk aversion can be rejected only at a 60% confidence level, in contrast with the other OPEC countries). Iraq and Nigeria were classified by Eckbo (1976) as the ‘expansionist fringe’ in OPEC because of their continuous push to increase oil production; in the period considered, Iran also behaved as the expansionist fringe, compelled by the necessities of the war. Moreover, in the 1980s, there was a common view that these countries often cheated on the cartel agreements. The empirical evidence of this paper has confirmed this division within OPEC and has indicated that this ‘expansionist fringe’ behaves simply as a revenue maximizer that follows a Euler equation based on rational forecast. In the model provided by Griffin to test the hypothesis of competitive model vs. monopolistic model for the period 1971–1983, the hypothesis that Iraq behaves in a competitive way could not be rejected even with a weak specification of the competitive model. This paper has constructed a method to test whether producers of natural resources, follow a maximizing behavior. As an example, we have applied it to oil but the same procedure can be applied to any exhaustible resource; future research should extend this method to other exhaustible resources.