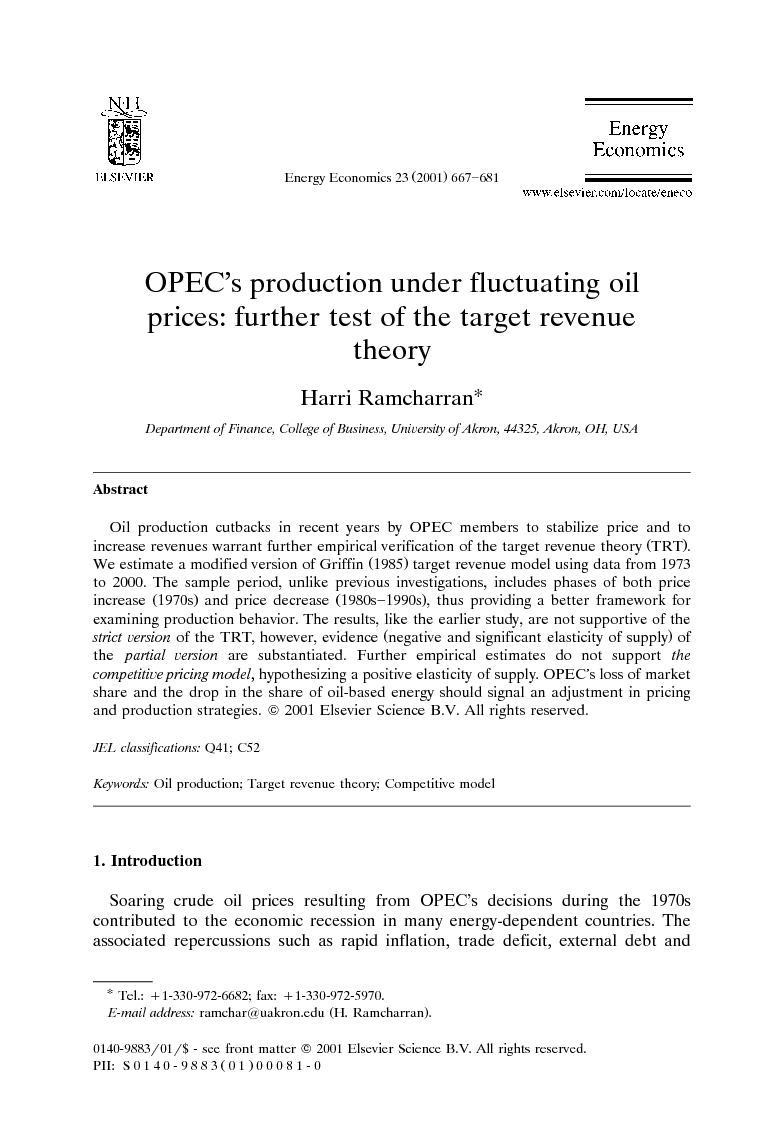 Oil production cutbacks in recent years by OPEC members to stabilize price and to increase revenues warrant further empirical verification of the target revenue theory (TRT). We estimate a modified version of Griffin (1985) target revenue model using data from 1973 to 2000. The sample period, unlike previous investigations, includes phases of both price increase (1970s) and price decrease (1980s–1990s), thus providing a better framework for examining production behavior. The results, like the earlier study, are not supportive of the strict version of the TRT, however, evidence (negative and significant elasticity of supply) of the partial version are substantiated. Further empirical estimates do not support the competitive pricing model, hypothesizing a positive elasticity of supply. OPEC's loss of market share and the drop in the share of oil-based energy should signal an adjustment in pricing and production strategies.

Soaring crude oil prices resulting from OPEC's decisions during the 1970s contributed to the economic recession in many energy-dependent countries. The associated repercussions such as rapid inflation, trade deficit, external debt and budget deficit reveal the vulnerability of global economy to the price of energy. These issues are analyzed in many studies, including, Fried and Schultze (1975) and Marquez (1986). In response to the energy crisis, many countries developed plans on alternative sources of energy and the possibility of inter-fuel substitution. Griffin and Gregory (1976), Pindyck (1979) and Apostolakis (1990) discuss the implications of these strategies. The first oil shock (1973–1974) positioned OPEC as an important force in the world oil market; that triggered a plethora of studies aimed to explain energy pricing and production behavior. Some of these include Blitzer et al. (1975), Fischer et al. (1975), Kalymon (1975), Cremer and Weitzman (1976), Hnyilicza and Pindyck (1976), Danielsen (1980), Newbery (1981), Verleger (1982), Adelman (1982), Griffin (1985), Dahl and Yucel (1991) and Gately (1995). The methodology includes: (a) the theory of exhaustible resources; (b) game theory; (c) simulation; (d) industrial economics; and (e) economic efficiency hypothesis. Mabro (1992) critically evaluates some of these approaches. An important aspect of OPEC's production behavior is the propensity for some members to cheat on quotas; this phenomenon is examined by Griffin and Xiong (1997). The target revenue theory (TRT), developed by Ezzati (1976), Cremer and Isfahani (1980) and Teece (1982), remains a popular (and controversial) theory of oil pricing and production. The theory postulates that production cutbacks occur in response to rising oil prices to equate oil revenue with investment needs. If exporting countries try to satisfy target revenue for domestic investment purposes, a backward bending supply schedule is hypothesized, thus the TRT explicitly implies that a fall in prices will result in output expansion. OPEC's production behavior in the mid-1970s seemed to be consistent with the TRT. Griffin (1985) estimates an empirical model of the TRT for OPEC with data for the period 1971–1983, a period of rapid price increase and finds little support of the theory. Structural changes in the world oil market, the growth of non-OPEC supply, the rapid decline in oil prices (the average spot price for crude fell from $36.68 per barrel in 1980 to $13.07 in 1998 with a record low of $10.41 in December 1998, [see Table A1 (Appendix A) and Fig. 1] and over production by some members of OPEC to enhance revenues warrant further testing of the TRT. More importantly, in the series of production cutbacks, OPEC has been able to boost the price of crude beginning March 1999 to a high of approximately $28 per barrel in 2000.1The Wall Street Journal (March 16, 2001) reports that OPEC, troubled by weakening oil demand the faltering world economy, is moving toward reducing output to keep the US price of oil near $30 a barrel ( Bahree and Herrick, 2001). Full-size image (4 K) Fig. 1. Petroleum prices (spot US$/barrel) 1980–1998. Source: International Financial Statistics: IMF. Abbreviations: ACP, average crude price; Dub Fat, Dubai, Fateh; UK Br, UK Brent; Wtin, West Texas Intermediate; Alns, Alaskan North Slope. Figure options This paper uses a modified version of the model developed by Griffin (1985) to empirically estimate the TRT for OPEC members using data for the period 1973–2000. A significant contribution of this study is that it utilizes data for a longer period that includes phases of output reduction and price increase (1970s) and output increase and price decrease (mid 1980s–1990s). The results should provide more reliable estimates than Griffin (1985) that are based on a period of only price increase. The plausibility of our approach reflects a better conceptualization of the issue and the provision of additional arguments and statistical evidence to justify the appropriateness of this model. A better understanding of pricing and output problems and options on long-run energy strategies could evolve from the results.

A variety of models aimed to explain OPEC's production behavior in responsive to changes in oil price has been used in recent years, one of these is the TRT model. Our study, based on data for the period 1973–2000, rejects the strict version of TRT. However, there is some evidence (significant negative elasticity of supply for most of OPEC members) to support the partial version of the theory. The results also reject the competitive pricing hypothesis. The empirical results seem to be consistent with recent OPEC's production behavior.6 The implications of the results are important for future research. First, supportive evidence of the partial version of the TRT and the rejection of the competitive hypothesis suggest serious reconsideration of the methodology on the strict version of the TRT. Second, it is possible to consider only one version of the TRT (hypothesizing a negative supply elasticity), which could be tested against the competitive model. OPEC's pricing and production strategies should be based on further research that clearly defines the appropriate market structure of OPEC. Dahl and Yucel (1991) argue that OPEC behavior is consistent with a duopoly while Adelman (1982) contents that it wobbles between the dominant firms and market sharing models. OPEC faces a challenging future because: (a) increasing supply from non-OPEC sources; (b) new exploration and discoveries by small producers; (c) expansion of production capacity in some member countries, e.g. Venezuela and Nigeria; (d) better drilling and exploration technology that could cut operating cost and lower price; and (e) volatile demand patterns in importing countries because of economic cycles or recession. OPEC may have to adjust to a market in which price and quantity are determined to some extent by demand and supply.