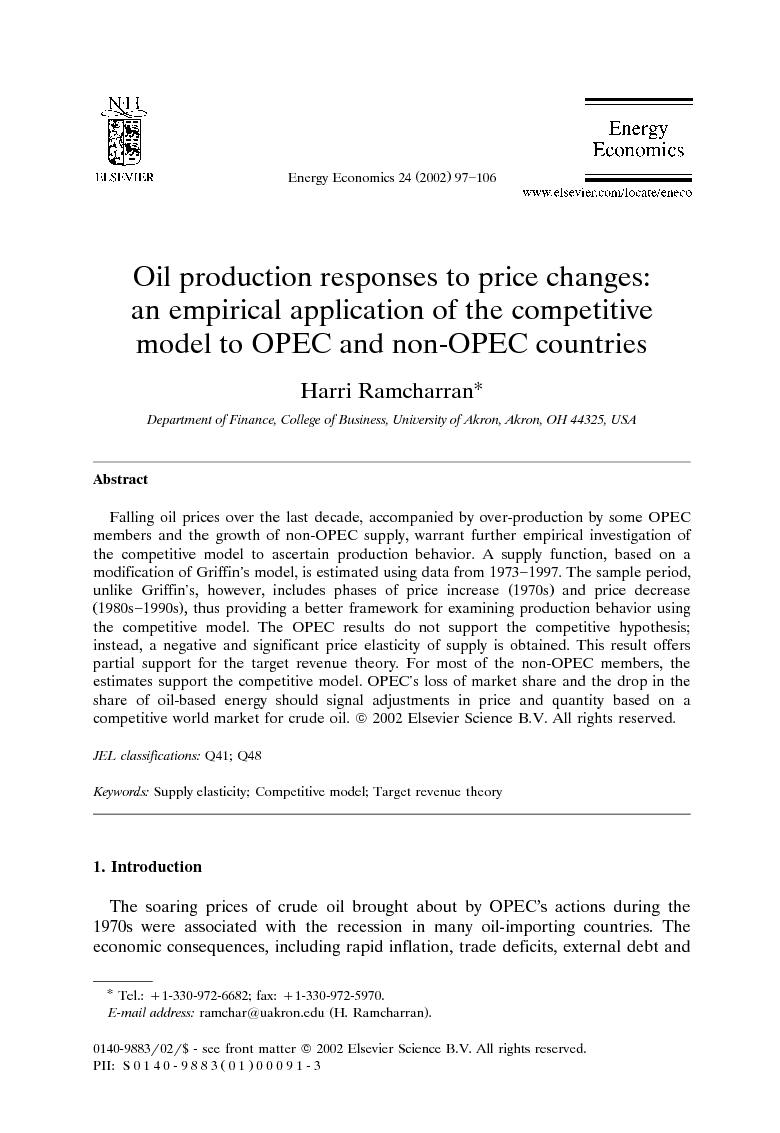 Falling oil prices over the last decade, accompanied by over-production by some OPEC members and the growth of non-OPEC supply, warrant further empirical investigation of the competitive model to ascertain production behavior. A supply function, based on a modification of Griffin's model, is estimated using data from 1973–1997. The sample period, unlike Griffin's, however, includes phases of price increase (1970s) and price decrease (1980s–1990s), thus providing a better framework for examining production behavior using the competitive model. The OPEC results do not support the competitive hypothesis; instead, a negative and significant price elasticity of supply is obtained. This result offers partial support for the target revenue theory. For most of the non-OPEC members, the estimates support the competitive model. OPEC's loss of market share and the drop in the share of oil-based energy should signal adjustments in price and quantity based on a competitive world market for crude oil.

Over the last two decades there has been a proliferation of models aimed to explain the behavior of oil producing countries’ responsiveness to oil price changes. In light of the renewed interest in the market-determined model, we estimated the supply elasticity for OPEC and non-OPEC countries using data for a longer period than earlier studies. The results reject the competitive hypothesis for all OPEC members and offer support for the target revenue hypothesis. Furthermore, for most non-OPEC members the results are supportive of the competitive hypothesis. OPEC faces a challenging future. It has to survive under very competitive conditions because of: (a) increasing supply from non-OPEC sources; (b) new exploration and discoveries by small producers; (c) expansion of production capacity in some member countries, for example, Venezuela and Nigeria; (d) better drilling and exploration technology that could cut operating cost and lower price, for example, three-dimensional seismic surveys, floating platforms and horizontal drilling; and (e) economic cycles and recession in importing countries could create very volatile demand patterns. OPEC has to adjust to a market in which price and quantity are determined by unfettered demand and supply, and not by geopolitics or a cartel with some maverick members.4