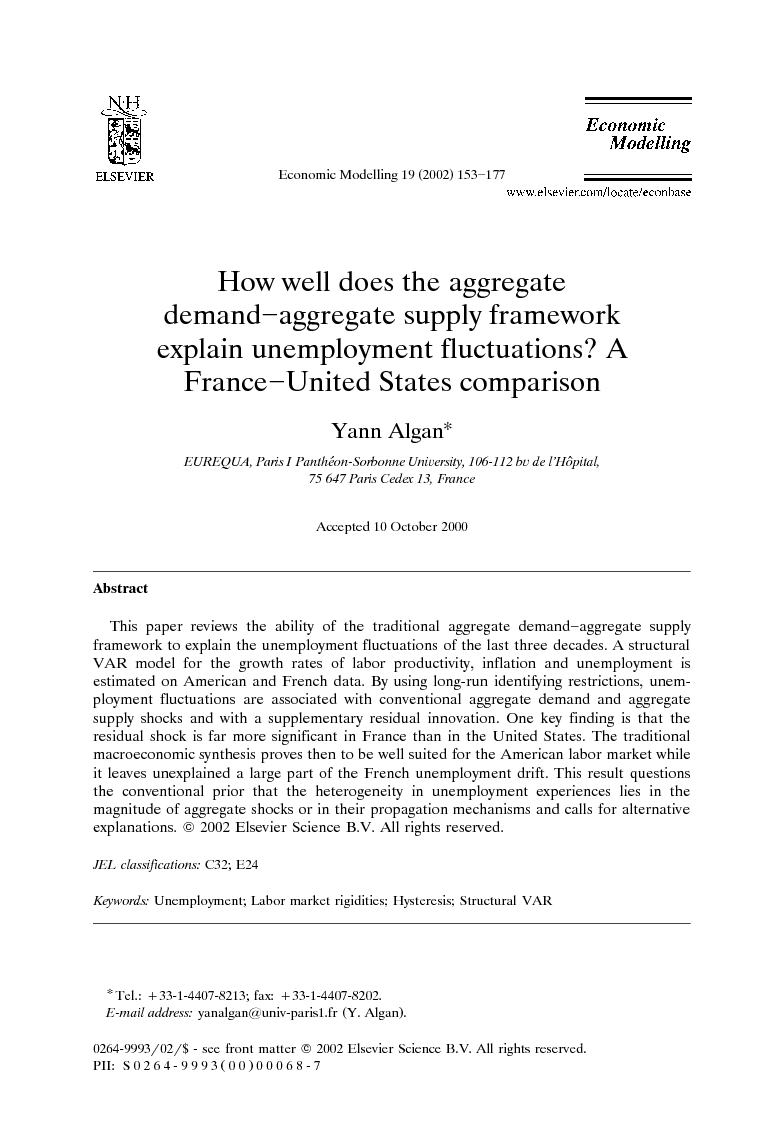 This paper reviews the ability of the traditional aggregate demand–aggregate supply framework to explain the unemployment fluctuations of the last three decades. A structural VAR model for the growth rates of labor productivity, inflation and unemployment is estimated on American and French data. By using long-run identifying restrictions, unemployment fluctuations are associated with conventional aggregate demand and aggregate supply shocks and with a supplementary residual innovation. One key finding is that the residual shock is far more significant in France than in the United States. The traditional macroeconomic synthesis proves then to be well suited for the American labor market while it leaves unexplained a large part of the French unemployment drift. This result questions the conventional prior that the heterogeneity in unemployment experiences lies in the magnitude of aggregate shocks or in their propagation mechanisms and calls for alternative explanations.

This paper has reconsidered the relative contribution of aggregate demand and aggregate supply shocks to unemployment fluctuations. To this end a structural VAR containing the growth rates of labor productivity, inflation and unemployment has been estimated on American and French data over the sample 1970:1–1998:4. By using long-run identifying restrictions, the unemployment rate has been allowed to be permanently affected by a supplementary residual shock which captures the unemployment fluctuations left unexplained by the standard aggregate demand–aggregate supply framework. The main results of the paper can be summarized as follows. I find that while the residual shock is not significant in the United States, it drives the main part of the French unemployment fluctuations at all horizons. This result suggests that the aggregate demand–aggregate supply framework is well suited for the United Sates but poorly explains the French labor market. Besides, it reveals that the trend in the French unemployment is not brought about by more persistent effects of supply and demand shocks in this country. This finding is opposed to the Blanchard and Summers (1986) seminal prior that European labor markets display more hysteresis features than the United States. More generally it challenges the conventional wisdom that the heterogeneity in unemployment experiences lies in the magnitude of the aggregate shocks or in differences in their propagation mechanisms. Second, the paper reveals the difference in the employment setting and the wage setting process across countries by stressing the very low impact of nominal demand shocks in France compared to the United States. This result provides further support to the existence of a Phillips curve in the United States while the wage-setting process seems better matched by a wage curve in France. Finally, this article shows that the main contribution of the residual shock to French unemployment history takes place at a time of buoyant labor market reforms during the eighties. These findings call for future research focusing on direct shocks to labor market characteristics.