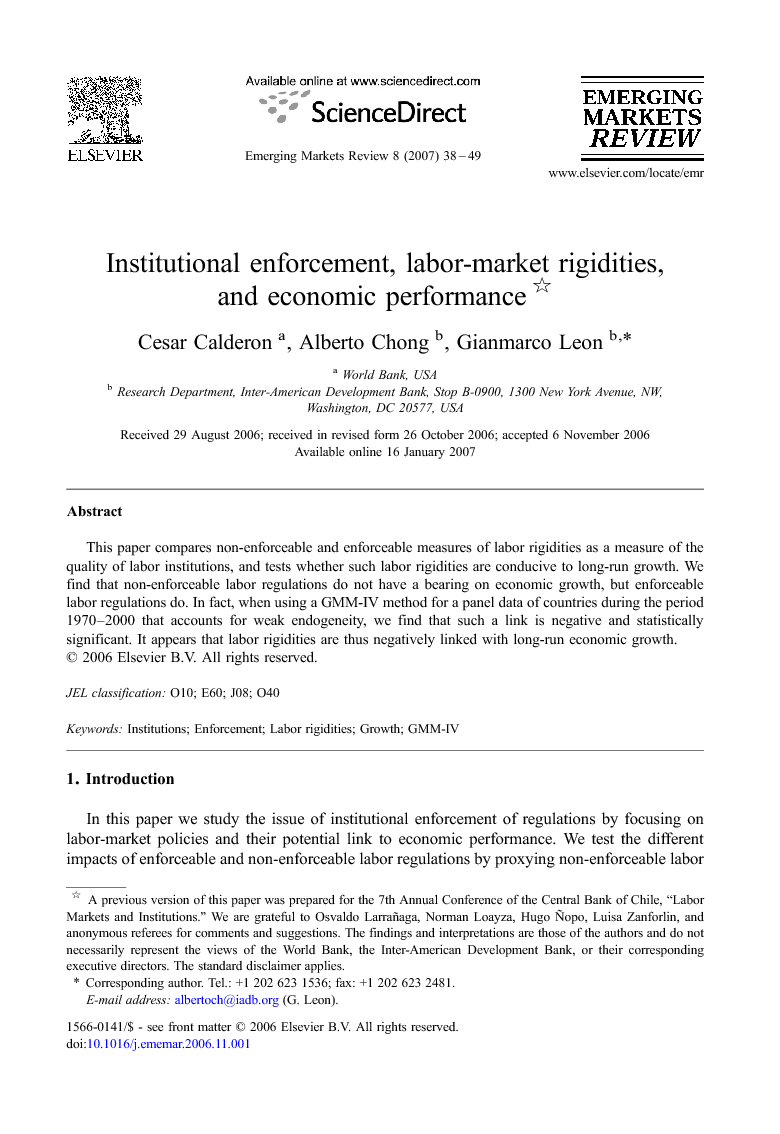 In this paper we study the issue of institutional enforcement of regulations by focusing on labor-market policies and their potential link to economic performance. We test the different impacts of enforceable and non-enforceable labor regulations by proxying non-enforceable labor rigidity measures using data on conventions from the International Labor Organization (ILO). It has been argued that non-enforceable conventions – that is, those that exist on paper and are simply de jure regulations – appear to be more distortionary and tend to be the least enforced in practice ( Squire and Suthiwart-Narueput, 1997). According to Freeman (1993), these conventions reflect the ideal regulatory framework from an institutionalist perspective and cover a variety of labor market issues, from child labor to placement agencies. Whereas in theory, a country's ratification of ILO conventions gives the country legal status and thus supersedes domestic regulations relating to those issues, in practice the degree of labor-market rigidity depends on how the conventions are enforced. It is the outcome of the regulations that matters, rather than their number. Different observers emphasize different outcomes: minimum wages, mandated benefits (such as old-age pension, health insurance, or maternity leave), mandated job security and high firing costs, large and powerful trade unions, and the government's share of the labor force. Note that distortions of this latter sort do not necessarily stem from a “thick” labor code, which re-emphasizes the distinction between non-enforceable and enforceable measures ( Forteza and Rama, 2006). There are two broad views regarding the role of labor-market regulation in economic performance. The distortionists argue that government regulations in labor markets – such as minimum wages, social security contributions, job security, and collective bargaining – create distortions (World Bank, 1990). In this view, labor-market regulations are obstacles to growth for at least three reasons: they prevent wages from equaling their marginal product in equilibrium, leading to a misallocation of resources; they hinder the adjustment of the labor market to shocks, and finally, labor regulations that redistribute economic rents from capital to labor reduce the profitability of investment and lead to lower growth rates. The institutionalists claim that market failures generate divergences from the ideal world and emphasize the benefits of government interventions in the labor markets (ILO, 1991). Labor regulations fulfill redistributive roles for low-wage workers or constitute insurance against adverse market outcomes (Standing and Tokman, 1991). Labor standards force employers to focus on enhancing their labor force through either training or technical innovation (Freeman, 1993). Finally, standards on mandated benefits may help solve moral hazard or selectivity issues that prevent firms from offering socially desirable benefits or contracts (Summers, 1988).1 Typically, the conventions issued by the International Labour Organization reflect the ideal regulatory framework from an institutionalist perspective, as their ratification gives them legal status, thus superseding domestic regulations on those issues (Forteza and Rama, 2006). In fact, many labor advocates support ILO conventions. This stems from the view that the bargaining power of employees is seen as weaker than the one from employers, which translates into conventions that are designed to restrict the ability of employers to decide on the terms and conditions of work. That is, labor advocates tend to focus on issues related with microeconomic issues about labor exploitation rather than macroeconomic arguments related with economic performance. Nevertheless, while the signing of ILO conventions may make it more likely that legislatures will later pass regulations in a country it is not clear such regulations will, in fact, be binding or enforceable. The classic example of a non-binding regulation is the case of the minimum wage. As a result of the adherence to a convention that calls for minimum wages in a country, it is not straightforward that enacting legislation ensuring such minimum wage will, indeed be applied in a compulsory manner. If monitoring is weak employers may be able to secure wages that are even lower than such required minimum wage. This is particularly true in the underground economies in many developing countries. In this context, the signing of ILO conventions may not necessarily translate into regulations that are binding.2Forteza and Rama (2006) provide a good example on the difference between rigidity on paper and rigidity in practice. They show that whereas Uganda and Chile are the median countries in their respective regions, when actual rigidity is studied in their labor codes, and not just the thickness of the conventions ratified, they both turn out to be more flexible. The data in this paper come from Rama and Artecona (2002). Their database contains panel information on labor regulations on paper and in practice for several countries, and focus on the period 1970–2000. The data are organized in five-year period averages. Regulation on paper, or non-enforceable regulation, is approximated by the number of International Labor Organization standards ratified by the national labor laws.3 Regulation in practice, or enforceable regulation, is proxied by information on categories such as minimum wages, conditions of work and benefits, trade unions and collective bargaining, and public-sector employment. We report the panel data regression results using three different types of estimators: least-squares-based estimators, including pooled ordinary least squares least squares with time effects, and least squares with country dummies (fixed-effects estimator); IV estimator using pooled IV and IV with time and country effects; and the generalized method of moments (GMM) estimators for dynamic panel data models developed by Arellano and Bond (1991), Arellano and Bover (1995), and Blundell and Bond (1998). Here, we appropriately control for the presence of unobserved country effects in a dynamic panel data model, and we account for endogenous regressors with both external and internal instruments. The rest of the paper is divided into three sections. Section 3 discusses the data and methodology applied, Section 4 discusses the findings, and Section 5 concludes.

In this paper we compare non-enforceable and enforceable measures of labor rigidities as a measure of the quality of labor institutions and test whether such labor rigidities are conducive to long run growth. We find than non-enforceable labor regulations do not have a bearing on economic growth, but enforceable labor regulations do. In fact, when using a GMM-IV method for a panel data of countries during the period 1970–2000, which accounts for potential weak endogeneity, we find that such a link is negative and statistically significant at conventional levels. Thus, it appears that labor rigidities are negatively linked with long-run economic growth. Our findings are robust to changes in specification. From a policy perspective, the above findings seem to indicate that the “thickness” of labor regulations per se is not necessarily a concern since it may not affect economic performance. However, enforceable and binding labor regulations do have the potential to affect growth rates in an economy. These findings are relevant not only for industrial countries where labor regulations appear to be somewhat significant, but also for developing countries where, somewhat paradoxically, regulation enacted in these countries may actually be non-binding and thus, harmless in terms of economic growth in the context of the findings in this paper. However, it is important to stress that the evidence presented in this paper focuses on whether labor regulations affects economic growth, not whether such regulations are binding. One might imagine different scenarios in which ILO regulations may have relatively large microeconomic effects, but negligible macroeconomic impact. Still, we show that the effect of regulation on growth may be an important topic especially as microeconomic inefficiencies caused by regulations may have significant macroeconomic effects.