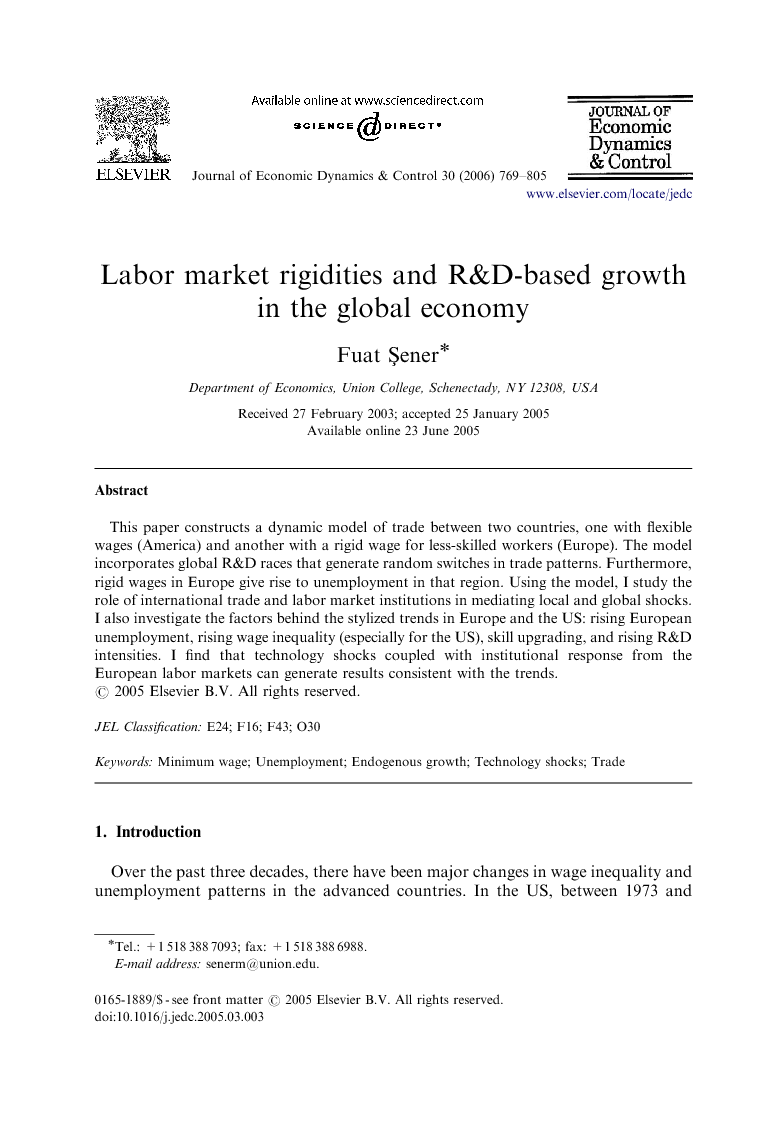 This paper constructs a dynamic model of trade between two countries, one with flexible wages (America) and another with a rigid wage for less-skilled workers (Europe). The model incorporates global R&D races that generate random switches in trade patterns. Furthermore, rigid wages in Europe give rise to unemployment in that region. Using the model, I study the role of international trade and labor market institutions in mediating local and global shocks. I also investigate the factors behind the stylized trends in Europe and the US: rising European unemployment, rising wage inequality (especially for the US), skill upgrading, and rising R&D intensities. I find that technology shocks coupled with institutional response from the European labor markets can generate results consistent with the trends.

In this paper, I constructed a dynamic two-country model of trade with endogenous R&D. The model considered the institutional differences between Europe and the US in a unified framework. The paper has three main results. First, it proposes TCRD as an alternative explanation to SBTC in the trade/wages/unemployment debate. Second, the paper implies that an economy with a flexible labor market can more easily pass on the effects of shocks to an economy with a rigid labor market. Third, the model uncovers the role of international trade and the related mechanisms in transmitting local shocks. The model can help identify the forces that can generate the stylized trends; however, many extensions can be suggested to improve the match between observed trends and numerical simulations. Incorporating heterogeneities across Europe (as advocated by Nickell, 1997) and also adding a North–South dimension to the model (as recently done by Grieben, 2004) can be the first steps along these lines. In addition, one can incorporate search frictions into the asymmetric labor markets setting and study wage inequality and unemployment (see for instance Acemoglu, 2003b; Arnold, 2002; Şener, 2001 for models with search unemployment). Finally, considering indicators of R&D productivity and economic integration as explanatory variables in the empirical framework of Blanchard and Wolfers (2000) can be a fruitful avenue for empirical research.