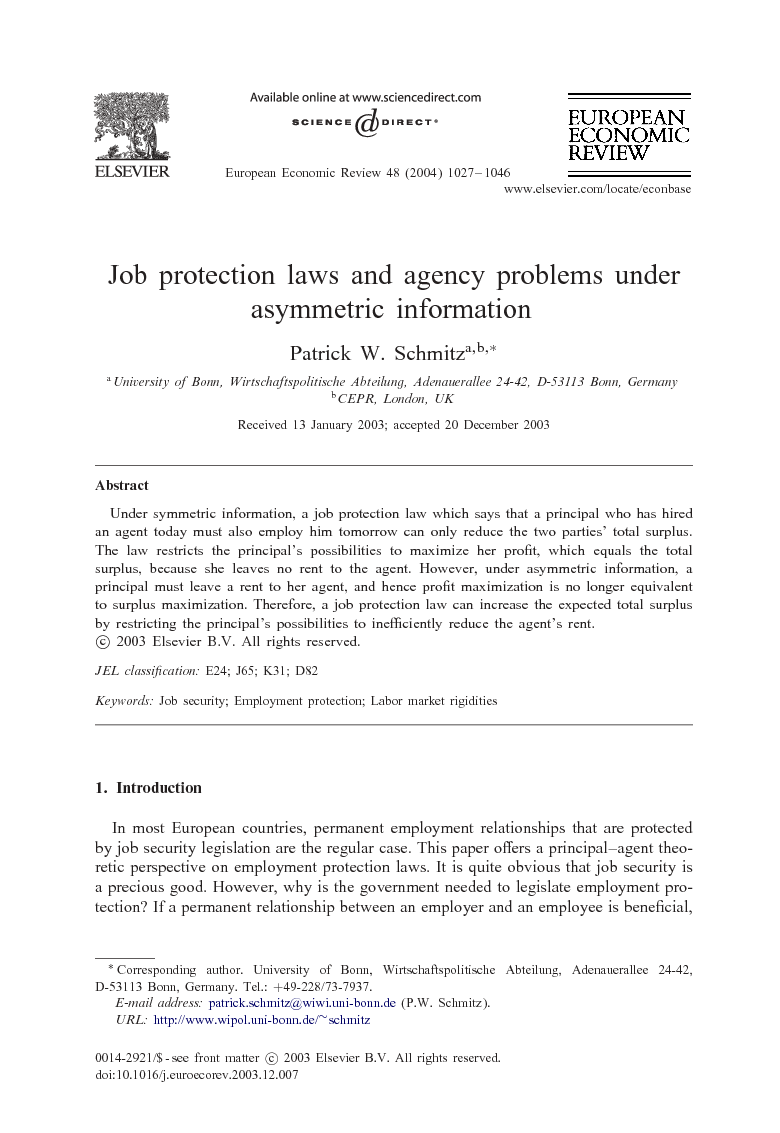 Under symmetric information, a job protection law which says that a principal who has hired an agent today must also employ him tomorrow can only reduce the two parties’ total surplus. The law restricts the principal's possibilities to maximize her profit, which equals the total surplus, because she leaves no rent to the agent. However, under asymmetric information, a principal must leave a rent to her agent, and hence profit maximization is no longer equivalent to surplus maximization. Therefore, a job protection law can increase the expected total surplus by restricting the principal's possibilities to inefficiently reduce the agent's rent.

In most European countries, permanent employment relationships that are protected by job security legislation are the regular case. This paper offers a principal–agent theoretic perspective on employment protection laws. It is quite obvious that job security is a precious good. However, why is the government needed to legislate employment protection? If a permanent relationship between an employer and an employee is beneficial, say because the employee is risk-averse or needs incentives to invest in firm-specific skills, then the two parties could deliberately write a labor contract that guarantees job security to the employee. How can a job protection law increase welfare over and above the level that can be reached by private contracting? After all, it is merely a restriction on the class of contracts that the two parties may write.1 In general, restrictions on the class of contracts that private parties may write can be desirable in the presence of externalities. For instance, welfare can be increased if cartel contracts are prohibited, because such contracts have negative externalities on the consumers, who are not contractual parties. But why should insecure or fixed-term employment contracts be prohibited? A possible reason is that permanent employment relationships have positive external effects that the contractual parties do not internalize.2 However, in what follows I will not consider any such externalities and instead only focus on the gains from trade that accrue to the employer and the employee. The main result of the analysis will be that state-mandated employment protection can strictly increase the expected surplus that an employer and an employee together can generate. This will be demonstrated in a simple principal–agent model that does not rely on risk-aversion, incomplete contracts, search frictions, wealth constraints, or limited commitment abilities. Instead, the result will follow immediately from the presence of asymmetric information, which of course is the cornerstone of the principal–agent theory. Under symmetric information, the employer can extract the full gains from trade with the employee. Hence, a law that restricts the class of feasible contracts will reduce not only the employer's profit, but at the same time the total surplus generated in the employment relationship. In contrast, under asymmetric information the employer must leave an information rent to the employee. This means that the employer's profit is no longer equal to the two parties’ total surplus. A job protection law may then decrease the employer's profit but simultaneously increase the total surplus, because it limits the possibilities of the employer to inefficiently dismiss the employee in order to reduce the information rent.3 Hence, the present paper illustrates that mandatory employment protection (i.e., a restriction on the class of admissible labor contracts) can be welfare-enhancing, even in a complete contracting model with rational actors.4 The most closely related paper I am aware of is Aghion and Hermalin (1990). They consider a signaling model and show that legal restrictions on the class of contracts that the informed party may offer can enhance welfare (by prohibiting inefficient signaling). In contrast, the present paper follows the adverse selection literature and assumes that the principal offers the contract to the privately informed agent.5 The remainder of the paper is organized as follows. In the next section, some empirical background and a brief literature review regarding employment protection are provided. In Section 3, the basic model is introduced. As a benchmark, the case of symmetric information is studied in Section 4. The main result is derived in Section 5, where the case of asymmetric information is analyzed. Extensions and modifications are briefly discussed in Section 6. Concluding remarks follow in Section 7. Some technical details have been relegated to the appendix.

Job security has many benefits. Someone who only has a fixed-term contract or who can easily be dismissed will suffer not only when he or she is particularly risk-averse. After all, an employee is not just a production factor such as a machine. An employee has a family and friends and might want to build a house and feel at home where he or she lives. It is important to be somewhat able to plan one's life, and many people (in particular in Europe) know what it means to be deeply rooted, they are not as mobile as capital and do not want to be forced to look for another job at another town when this means leaving one's family, friends, and home. While these values may be difficult to quantify, a permanent employment relationship also has other advantages. An employee who is happy in his or her private life may well be more productive. If I do not have to worry about where I might get a job in the future, I will be more concentrated on my work today. Employees who know that they are allowed to keep their jobs are more willing to identify with the employer's objectives and invest in specific skills. In this paper it has been demonstrated that employment protection may well be desirable, even if all these obvious values of job security are disregarded.37 As has been discussed in Section 2, there are different types of job protection laws in reality. Clearly, laws that would make it impossible to punish employees who shirk cannot be justified, as has been pointed out in Section 6. Yet, laws that prohibit employers from dismissing employees whose performance is good may indeed be welfare-enhancing. Specifically, it has been shown that in the presence of rents due to asymmetric information, state-mandated employment protection can increase the total surplus generated in the principal–agent relationship over and above the level that would be attained by private contracting.38 Of course, this does not necessarily imply that employment protection will actually be legislated whenever it would increase the expected total surplus, because in reality a government clearly is not benevolent. In practice, a decisive factor will be whether employers or employees have a stronger influence on the government. In particular, a serious conflict of interests arises in a special case that has not received much attention in the literature. This is the important case in which the state is the employer. It is obvious that in this case the objective function of the legislator is biassed towards the interests of the employer. As a result, employees of the state would not get enough job security if they were not protected by the constitution and courts that restrain the government. On the one hand, one could argue that this is a rationale for constitutional provisions that give civil servants a special status. On the other hand, this might in turn lead to overprotection. What is important is simply that the constitution assures that employees of the state do not get the kind of insecure jobs and fixed-term contracts that the government rightly prohibits in the private sector.39 It is an interesting problem for future research to investigate how the constitution or other institutions should be designed in order to make sure that a reasonable degree of mandatory job protection is implemented when the government is not benevolent.