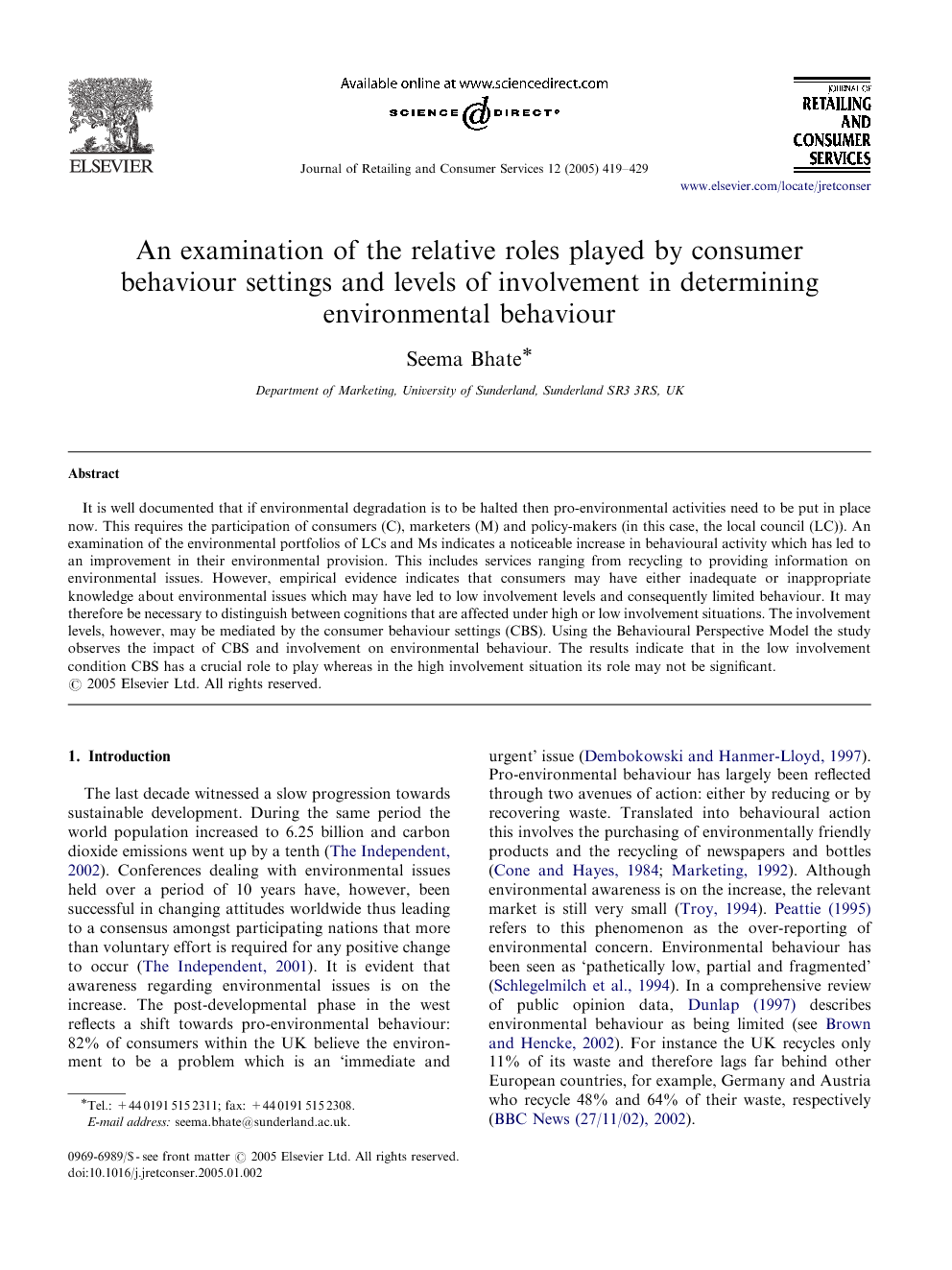 It is well documented that if environmental degradation is to be halted then pro-environmental activities need to be put in place now. This requires the participation of consumers (C), marketers (M) and policy-makers (in this case, the local council (LC)). An examination of the environmental portfolios of LCs and Ms indicates a noticeable increase in behavioural activity which has led to an improvement in their environmental provision. This includes services ranging from recycling to providing information on environmental issues. However, empirical evidence indicates that consumers may have either inadequate or inappropriate knowledge about environmental issues which may have led to low involvement levels and consequently limited behaviour. It may therefore be necessary to distinguish between cognitions that are affected under high or low involvement situations. The involvement levels, however, may be mediated by the consumer behaviour settings (CBS). Using the Behavioural Perspective Model the study observes the impact of CBS and involvement on environmental behaviour. The results indicate that in the low involvement condition CBS has a crucial role to play whereas in the high involvement situation its role may not be significant.

The last decade witnessed a slow progression towards sustainable development. During the same period the world population increased to 6.25 billion and carbon dioxide emissions went up by a tenth (The Independent, 2002). Conferences dealing with environmental issues held over a period of 10 years have, however, been successful in changing attitudes worldwide thus leading to a consensus amongst participating nations that more than voluntary effort is required for any positive change to occur (The Independent, 2001). It is evident that awareness regarding environmental issues is on the increase. The post-developmental phase in the west reflects a shift towards pro-environmental behaviour: 82% of consumers within the UK believe the environment to be a problem which is an ‘immediate and urgent’ issue (Dembokowski and Hanmer-Lloyd, 1997). Pro-environmental behaviour has largely been reflected through two avenues of action: either by reducing or by recovering waste. Translated into behavioural action this involves the purchasing of environmentally friendly products and the recycling of newspapers and bottles (Cone and Hayes, 1984; Marketing, 1992). Although environmental awareness is on the increase, the relevant market is still very small (Troy, 1994). Peattie (1995) refers to this phenomenon as the over-reporting of environmental concern. Environmental behaviour has been seen as ‘pathetically low, partial and fragmented’ (Schlegelmilch et al., 1994). In a comprehensive review of public opinion data, Dunlap (1997) describes environmental behaviour as being limited (see Brown and Hencke, 2002). For instance the UK recycles only 11% of its waste and therefore lags far behind other European countries, for example, Germany and Austria who recycle 48% and 64% of their waste, respectively (BBC News (27/11/02), 2002).