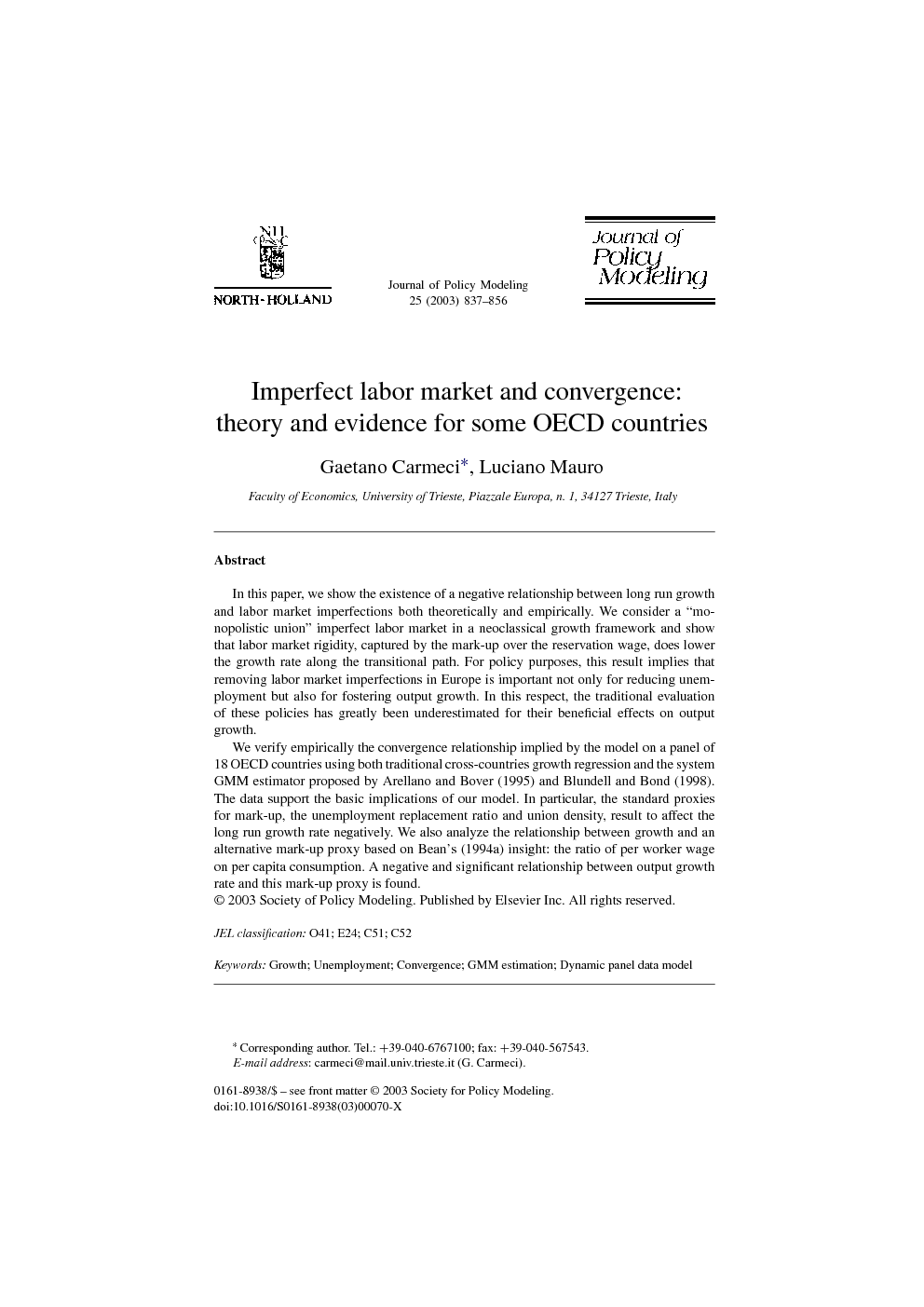 In this paper, we show the existence of a negative relationship between long run growth and labor market imperfections both theoretically and empirically. We consider a “monopolistic union” imperfect labor market in a neoclassical growth framework and show that labor market rigidity, captured by the mark-up over the reservation wage, does lower the growth rate along the transitional path. For policy purposes, this result implies that removing labor market imperfections in Europe is important not only for reducing unemployment but also for fostering output growth. In this respect, the traditional evaluation of these policies has greatly been underestimated for their beneficial effects on output growth. We verify empirically the convergence relationship implied by the model on a panel of 18 OECD countries using both traditional cross-countries growth regression and the system GMM estimator proposed by Arellano and Bover (1995) and Blundell and Bond (1998). The data support the basic implications of our model. In particular, the standard proxies for mark-up, the unemployment replacement ratio and union density, result to affect the long run growth rate negatively. We also analyze the relationship between growth and an alternative mark-up proxy based on Bean’s (1994a) insight: the ratio of per worker wage on per capita consumption. A negative and significant relationship between output growth rate and this mark-up proxy is found.

In this paper we explore both theoretically and empirically the possible effects of an imperfect labor market on growth. We show that considering an imperfect labor market with a monopolistic union in a neoclassical growth model the degree of labor market imperfection does affect the growth rate along the transitional path. In the empirical part of the paper we test the model implications on a panel of 18 OECD countries. The analysis is performed in a standard cross-countries growth regression framework as well as in a panel data context applying the system GMM estimator proposed by Arellano and Bond (1995) and Blundell and Bond (1998). We find that the standard proxies of mark-up suggested in the literature, namely the unemployment replacement ratio and the union power, have negative long run growth effects. We propose an alternative mark-up proxy that should capture the Bean’s (1994) insight and implicitly tests for one of our model’s assumptions: the ratio of per capita wage over per capita consumption. This variable appears to influence negatively and significantly the growth of output. Both the theoretical and empirical analyses we present imply that labor market imperfections have long run growth effects. In turn, these findings suggest that the costs of these imperfections are likely to be greatly underestimated in the literature. On the other hand the good news is that, according to our theory and the empirical evidence, policies aimed toward a better functioning of the labor market could not only reduce unemployment (OECD, 1999) but also foster long run growth.