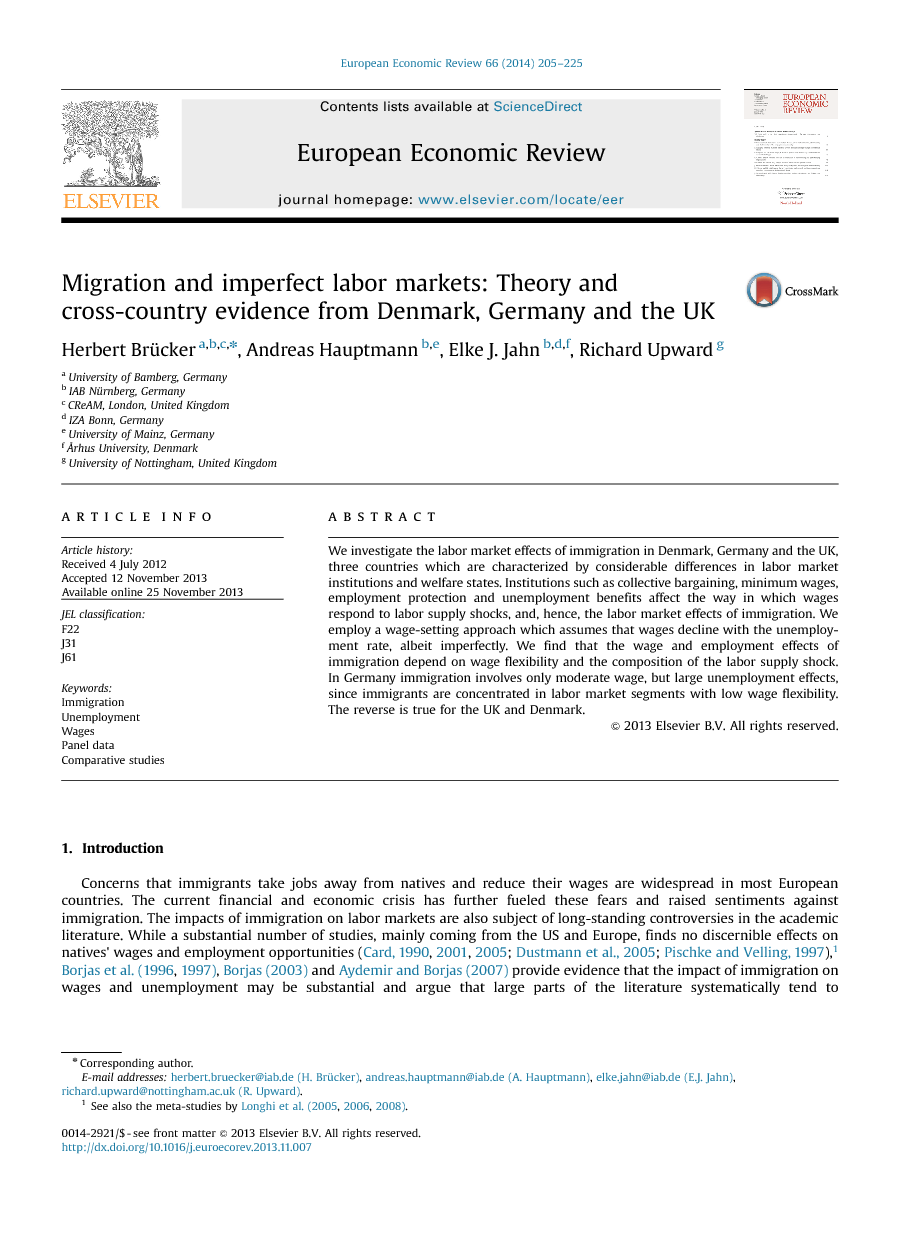 This paper uses a wage-setting approach to analyze the wage and employment effects of immigration in Denmark, Germany and the UK. We apply an estimation and instrumentation strategy which does not rely on the assumption of clearing labor markets, and we derive the wage and unemployment effects simultaneously from a coherent framework which considers wage rigidities. Because institutions and policies differ significantly between countries, in this paper we take a comparative perspective in a setting with imperfect labor markets. Our findings suggest that labor market institutions do play an important role in determining the wage and employment effects of immigration, although the degree differs somewhat across countries. In the UK, where labor markets are characterized by a high level of wage flexibility we find the highest elasticity between wages and unemployment. The differences are however not as large as one might expect. A more intriguing finding is that the elasticity between wages and unemployment tends to increase monotonically with the skill level of workers in Germany and the UK, while it tends to decline in Denmark. While the former result can be explained by a lower union density and coverage of collective bargaining in the high skilled segments of the labor markets in Germany and the UK, the latter finding might be traced back to different causes: an industrial relation system which is characterized by a high union density and a high coverage of collective bargaining in the medium and upper segments of the labor market, a high share of public sector employment among the high-skilled and the progressive tax system. In Germany, where immigrants concentrate in labor market segments with a low wage flexibility, we find that immigration has only minor wage effects, but a large impact on the unemployment rate. In contrast, we find in the UK and Denmark larger wage and smaller unemployment effects. Again, wage flexibility in combination with the structure of the labor supply can explain these differences. The UK, where wage flexibility is particularly high in the high-skilled segment, has the best educated immigrant workforce among our three countries. In Denmark, immigrants are disproportionately represented in the less-skilled segment of the labor market, where the responsiveness of wages to unemployment is again high. Thus, depending on the wage flexibility and the composition of the immigrant labor supply shock, we find different effects of immigration on wages and unemployment. An important factor which affects our results is the labor market assimilation of immigrants, measured in terms of the elasticity of substitution between native and foreign workers. Whether, and to what extent, immigrants and natives are imperfect substitutes in the labor market is subject of ongoing controversies in the literature. Our findings indicate, in line with many other studies, that they are imperfect substitutes. These findings are robust to the use of alternative weights, definitions of the dependent variable and reclassification of education and work experience. Comparing our results with a counterfactual scenario where labor markets clear and labor supply is inelastic, we find striking differences across the three countries: In Germany, simulations based on our wage-setting approach deliver only half of the wage impact a counterfactual scenario with clearing labor markets and inelastic labor supply would predict. In contrast, in Denmark and the UK, the wage adjustment is about four-fifths of that predicted by a scenario with perfect wage adjustment. As outlined above, the differences between Germany and the two other countries can be explained by the fact that the labor supply shock is concentrated in labor market segments with a low wage flexibility in Germany, while the reverse is true in the two other countries. Nevertheless, even in Denmark and the UK the differences between the wage-setting simulations and the counterfactual scenario suggest that it is worthwhile to take the role of labor market institutions into account when analysing the wage effects of immigration.