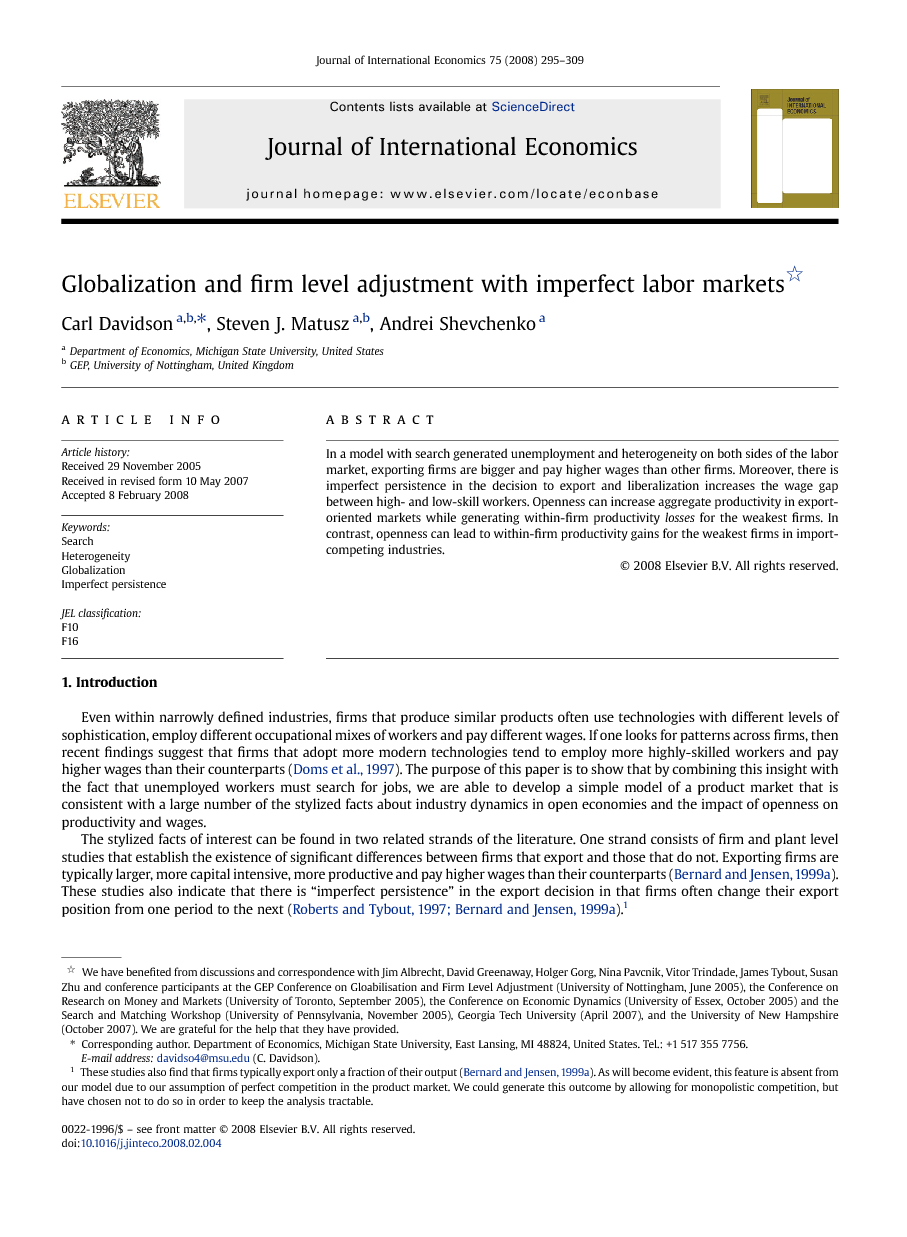 In a model with search generated unemployment and heterogeneity on both sides of the labor market, exporting firms are bigger and pay higher wages than other firms. Moreover, there is imperfect persistence in the decision to export and liberalization increases the wage gap between high- and low-skill workers. Openness can increase aggregate productivity in export-oriented markets while generating within-firm productivity losses for the weakest firms. In contrast, openness can lead to within-firm productivity gains for the weakest firms in import-competing industries.

We have presented a model based on Albrecht and Vroman (2002) in which managers differentiated by ability search over firms for jobs. Initially identical firms are ex-post heterogeneous as some adopt a basic technology and pay low wages, whereas others adopt a modern technology, employ high-skilled managers and pay high wages. As in Melitz (2003), Bernard et al. (2003), and Yeaple (2005), we find that exporting firms are typically larger, more productive, and pay higher wages than their counterparts. In addition, as in Yeaple (2005), the firm-side heterogeneity in our model arises endogenously as a natural outcome of profit-maximizing decisions. Our paper departs from previous work in the manner in which the labor market is modeled. Building on the insights of Albrecht and Vroman (2002), we have shown that industry dynamics are largely determined by two factors: the types of firms different managers are willing to match with and the types of matches that actually occur. In particular, we have shown that when high-skilled managers are willing to accept low-tech jobs, imperfect persistence in the decision to export is a natural feature of equilibrium in that these firms will export when matched with high-skilled managers and sell their output domestically when matched with low-skilled managers. Thus, our model yields strong predictions about how the export survival and birth rates will vary with firm level measures of productivity and wages. We have also shown that when high-skilled managers match with adopters of basic technology, openness enhances productivity in export markets by reallocating market shares in favor of the most productive firms. In this case, openness has no impact of within-firm measures of total factor productivity. While these two results can also be found in Melitz (2003), Bernard et al. (2003) and Yeaple (2005), a new possibility emerges in our model due to the fact that openness alters the spread between the revenues earned by firms that choose different technologies. In export markets, this spread is increased, causing the wages offered by the firms to diverge; whereas in import-competing markets the spread is decreased, causing the wage gap to contract. As a result, liberalization may alter the job-market preferences of the high-skilled managers. We have shown that in export markets, liberalization may cause high-skilled managers to reject job offers from firms that have adopted the basic technology. This then leads to large aggregate productivity gains due to market share reallocations and within-firm productivity losses for the weakest firms in the industry. In contrast, liberalization may cause high-skilled managers to start to accept these same jobs in import-competing industries. This would lead to within-firm productivity gains at this set of firms, an outcome that is consistent with recent empirical findings. Our model also allows us to derive predictions that differ from Yeaple (2005) about the link between openness and the wage gap between skill groups. Since exporting increases the surplus generated by high-tech firms, high-skilled managers employed by these firms gain the most from liberalization. High-skilled managers employed by low-tech firms gain as well, since their outside opportunities are enhanced by the increase in wages paid by high-tech firms. Low-skilled managers, on the other hand, suffer nominal wage losses unless the domestic price rises sufficiently. The reason for this is that the shift in market shares away from low-tech firms (the only firms offering jobs to these workers) lowers the outside opportunities for low-skilled managers and weakens their bargaining power. These results are consistent with recent evidence that finds the wage gap between high-skilled and low-skilled rising as markets become more open. There are a variety of ways to test the many predictions our model yields. We close by suggesting one test that we find particularly intriguing. In a paper closely related to Albrecht and Vroman (2002), Acemoglu (1999) presents a model of a labor market in which high-skilled and low-skilled workers search across (possibly) heterogeneous firms for jobs. He shows that two types of equilibria can exist. In the first, which he refers to as a “separating equilibrium,” some firms create high-tech jobs and match only with high-skilled workers while other firms create low-tech jobs and match only with low-skilled workers (thus, this is similar to the EPS equilibrium in the Albrecht–Vroman model). In the other equilibrium, which he refers to as a “pooling equilibrium,” all firms create the same type of jobs and match with both types of workers. Acemoglu refers to these jobs as “middling” and shows that middling jobs will be offered only when the relative productivity of high-skilled versus low-skilled workers is not too great; otherwise, equilibrium entails separation. In the latter part of his paper, Acemoglu (1999) offers a variety of evidence that in many industries middling jobs have been disappearing and have been replaced by the type of jobs that would be offered in a separating equilibrium. If we apply the logic presented in this paper to Acemoglu's model, the conclusion is that openness should cause middling jobs to disappear in export-oriented industries and appear in import-competing industries. This follows from the fact that exporting increases the spread between the revenues that the two types of workers can generate, while import competition decreases this spread. In his empirical analysis, Acemoglu does not separate his industries into groups based on their trade status. Our paper suggests that doing so might allow for a direct test of our model's prediction that openness can alter the nature of the labor market equilibrium.