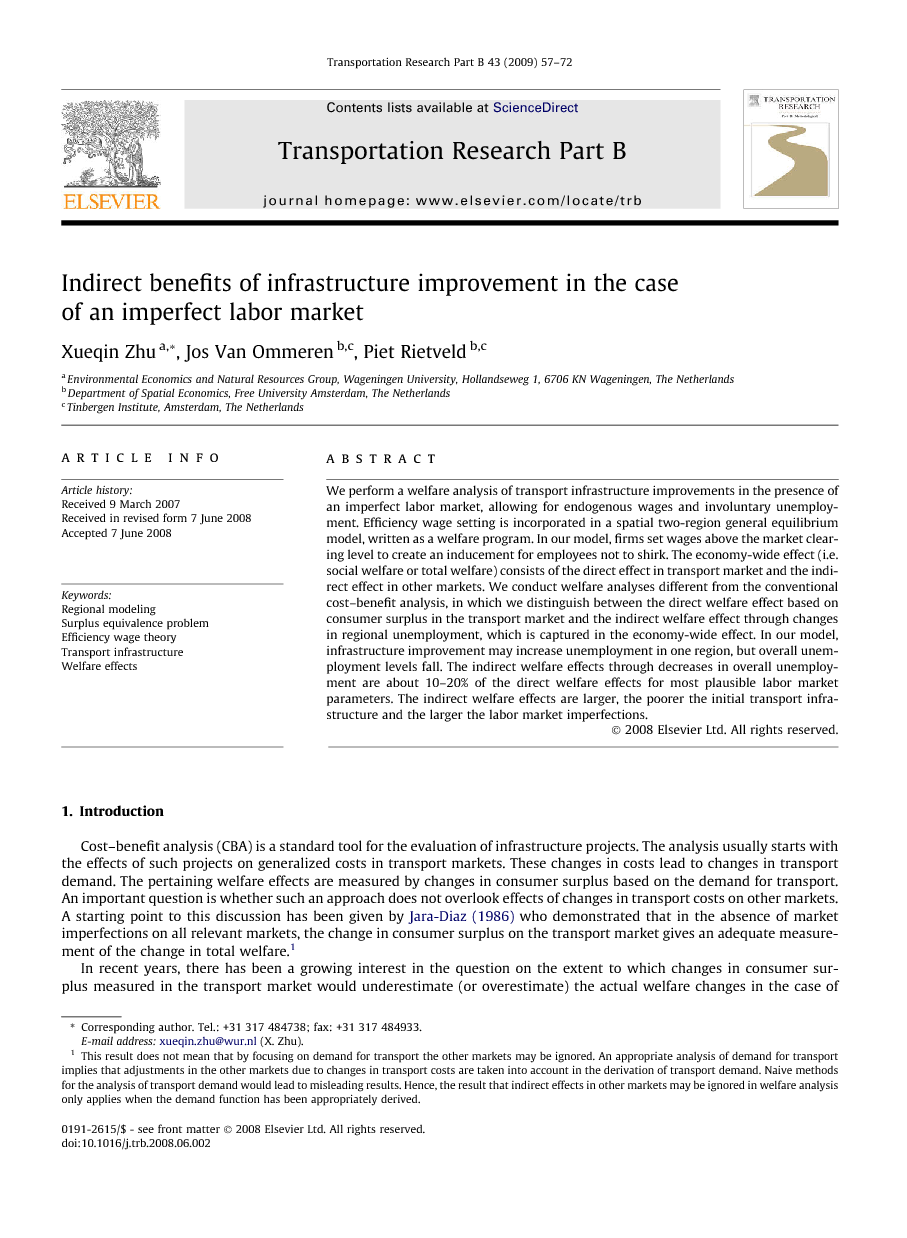 Previous studies showed that there was a departure between social benefits and user’s benefits due to market power in product markets and agglomeration. This paper studies the surplus equivalence problem in the context of labor market imperfections. The direct welfare effect of an infrastructure improvement is measured by the user benefits using consumer surplus, while the economy-wide welfare effect is measured by social welfare. Specifically, we develop a spatial (regional) general equilibrium model incorporated with efficiency wage theory to include an imperfect labor market. Our model is built on the basis of central planner’s welfare maximization subject to the economic constraints including wage setting and an exogenous unemployment benefit policy. Due to the imperfect labor market and the exogenous unemployment benefit policy, the model outcome (the welfare optimum or the equilibrium) reflects a second-best world. It is constrained Pareto-efficient for the welfare objective. For comparing the social welfare based on the welfare program with the direct welfare based on the consumer surplus in the transport market using the rule of half, we examine how social welfare increases with a decrease in transport costs in the welfare program. Intuitively, reduced transport costs increase interregional trade and the production quantities, which leads to a more efficient production structure among regions by reallocating labor use. In the context of our model, involuntary unemployment falls, and the benefits of this fall, which are not captured by the firm’s demand for transport when using the rule of half, must be included in the welfare calculations. Our model has been employed for analyzing the impacts of the improvement of infrastructure between regions in a numerical example, assuming tradable goods and immobile factors. We conduct the welfare analysis in the context of the surplus equivalence problem, where we distinguish between the direct welfare effect using user’s benefits in the transport market and the indirect welfare effect through changes in involuntary unemployment. The numerical simulation shows that as the transport cost rate decreases due to the infrastructure improvement, the interregional trade increases and there is a tendency of specialization for more efficient production. This leads to a welfare improvement in both regions. As a whole, the indirect welfare effects are about 10–20% of the direct welfare effects for most plausible parameter values which ensures the elasticity of the wage curve to be around −0.1. The order of magnitude of a 10–20% underestimation for welfare effects of infrastructure improvement due to labor market imperfections may be interpreted as moderate. On the one hand, the indirect effect is not so large that it would not lead to entirely different investment programs. It would only affect decisions on those alternatives where costs and benefits would be rather close. On the other hand, it is not so small that it just enters the domain of the usual uncertainties that prevail in applied policy analysis. Besides, it has a consistently positive outcome, implying that ignoring it would lead to a systematic – though limited – bias in decision-making in this field. Hence, it would be wrong to ignore it in real world applications. In addition, one should be aware that the indirect welfare effect related to labor market imperfections considered in the current paper might be complementary to indirect welfare effect related to commuting (Pilegaard and Fosgerau, 2008), as well as to indirect effects in other markets as mentioned in Section 1. The sum of these indirect welfare effects related to various markets may well reach much higher levels. We conducted an elaborated sensitivity analysis of the welfare effects to the values of some important parameters. It shows that an economy with poor infrastructure condition has more indirect welfare impacts than the economy with good infrastructure. A larger labor market imperfection has higher indirect welfare effects. This study shows that the surplus equivalence problem becomes important for assessment of transport infrastructure projects with poor initial infrastructure condition and when labor market imperfections are large.