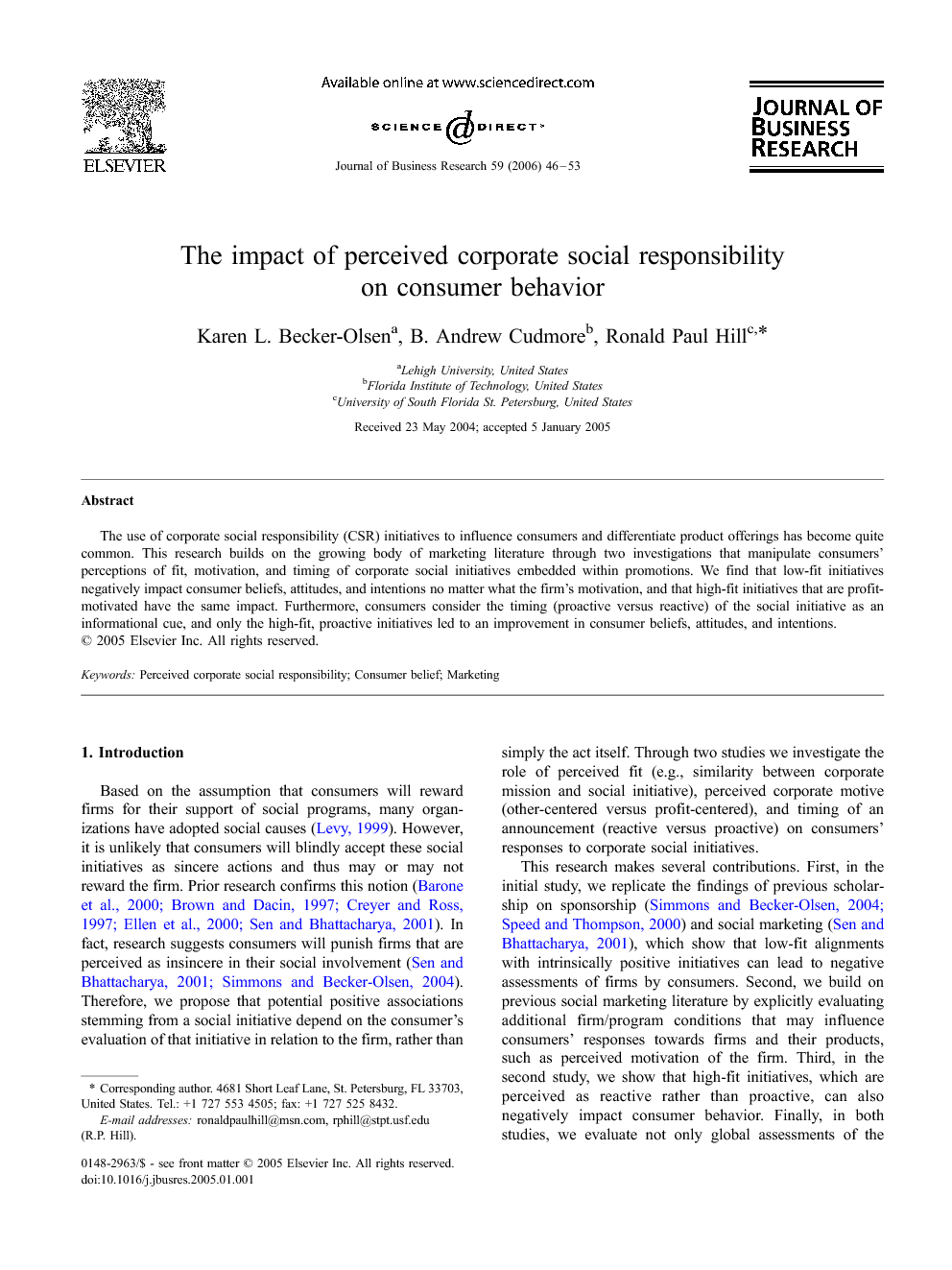 The use of corporate social responsibility (CSR) initiatives to influence consumers and differentiate product offerings has become quite common. This research builds on the growing body of marketing literature through two investigations that manipulate consumers' perceptions of fit, motivation, and timing of corporate social initiatives embedded within promotions. We find that low-fit initiatives negatively impact consumer beliefs, attitudes, and intentions no matter what the firm's motivation, and that high-fit initiatives that are profit-motivated have the same impact. Furthermore, consumers consider the timing (proactive versus reactive) of the social initiative as an informational cue, and only the high-fit, proactive initiatives led to an improvement in consumer beliefs, attitudes, and intentions.

Based on the assumption that consumers will reward firms for their support of social programs, many organizations have adopted social causes (Levy, 1999). However, it is unlikely that consumers will blindly accept these social initiatives as sincere actions and thus may or may not reward the firm. Prior research confirms this notion (Barone et al., 2000, Brown and Dacin, 1997, Creyer and Ross, 1997, Ellen et al., 2000 and Sen and Bhattacharya, 2001). In fact, research suggests consumers will punish firms that are perceived as insincere in their social involvement (Sen and Bhattacharya, 2001 and Simmons and Becker-Olsen, 2004). Therefore, we propose that potential positive associations stemming from a social initiative depend on the consumer's evaluation of that initiative in relation to the firm, rather than simply the act itself. Through two studies we investigate the role of perceived fit (e.g., similarity between corporate mission and social initiative), perceived corporate motive (other-centered versus profit-centered), and timing of an announcement (reactive versus proactive) on consumers' responses to corporate social initiatives. This research makes several contributions. First, in the initial study, we replicate the findings of previous scholarship on sponsorship (Simmons and Becker-Olsen, 2004 and Speed and Thompson, 2000) and social marketing (Sen and Bhattacharya, 2001), which show that low-fit alignments with intrinsically positive initiatives can lead to negative assessments of firms by consumers. Second, we build on previous social marketing literature by explicitly evaluating additional firm/program conditions that may influence consumers' responses towards firms and their products, such as perceived motivation of the firm. Third, in the second study, we show that high-fit initiatives, which are perceived as reactive rather than proactive, can also negatively impact consumer behavior. Finally, in both studies, we evaluate not only global assessments of the firm (e.g., overall attitude), but also specific beliefs such as corporate ability and corporate credibility.

We were able to replicate the findings of the first experiment with regard to high-fit, socially motivated initiatives. Furthermore, we extend these findings and demonstrate that some high-fit, socially motivated programs may negatively impact consumer behavior responses to promotions. The thought listings suggest that when consumers assign blame for acts to firms, they strongly question organizational motives and negatively evaluate organizational actions. The findings involving corporate ability may be the result of using social initiatives that are more closely aligned to product/service offerings than in Study 1, suggesting to respondents that managers could have prevented the acts that sparked the initiatives.