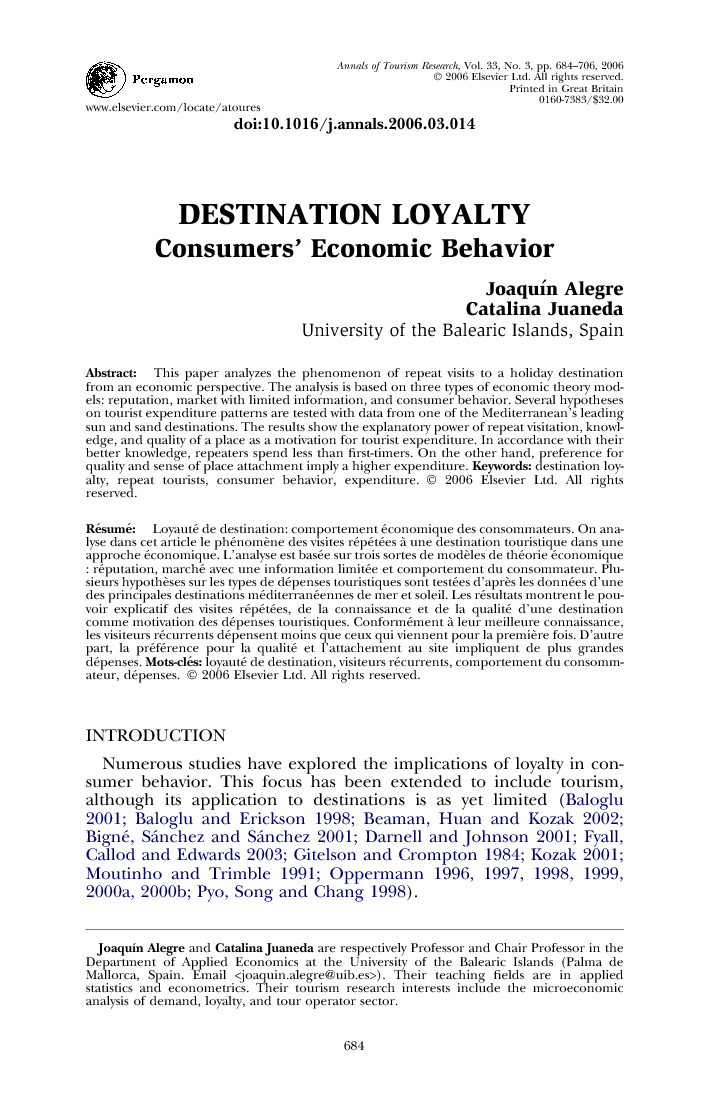 This paper analyzes the phenomenon of repeat visits to a holiday destination from an economic perspective. The analysis is based on three types of economic theory models: reputation, market with limited information, and consumer behavior. Several hypotheses on tourist expenditure patterns are tested with data from one of the Mediterranean’s leading sun and sand destinations. The results show the explanatory power of repeat visitation, knowledge, and quality of a place as a motivation for tourist expenditure. In accordance with their better knowledge, repeaters spend less than first-timers. On the other hand, preference for quality and sense of place attachment imply a higher expenditure.

Numerous studies have explored the implications of loyalty in consumer behavior. This focus has been extended to include tourism, although its application to destinations is as yet limited (Baloglu, 2001, Baloglu and Erickson, 1998, Beaman et al., 2002, Bigné et al., 2001, Darnell and Johnson, 2001, Fyall et al., 2003, Gitelson and Crompton, 1984, Kozak, 2001, Moutinho and Trimble, 1991, Oppermann, 1996, Oppermann, 1997, Oppermann, 1998, Oppermann, 1999, Oppermann, 2000a, Oppermann, 2000b and Pyo et al., 1998). In marketing and tourism analyses, repeat visits have generally been regarded as desirable (Oppermann 2000b) because, among other things, it is thought, first, that the marketing costs needed to attract repeaters are lower than those required for first-time tourists; second, a return is a positive indicator of one’s satisfaction; third, an inertial attitude of high repeaters increases their likelihood to return (Oppermann 1998). General research has also focused on the relationship between brand loyalty and price sensitivity, leading to the conclusion that loyalty reduces consumer sensitivity to price variations (Krishnamurthi and Papatla 2003). Likewise, a business with loyal consumers would be able to maintain higher prices than its rivals, and this attachment would thus be a business defense against rival competition (Wernerfelt 1991) as well as a way of guaranteeing the product’s continued quality (Keane, 1997 and Shapiro, 1983). In economic literature, consumer satisfaction has been linked to higher business profits, through the generation of loyalty. Nevertheless, no definitive relationship has been confirmed between satisfaction and profitability (Anderson et al., 1994, Gurau and Ranchhod, 2002, Hallowell, 1996, Heskett et al., 1997 and Oliver, 1999). The benefits that a high degree of loyalty represents for destinations will depend on possible differences in expenditure between repeat and first-time tourists. If both types have similar mean expenditures per day, the destination will benefit from visitor loyalty because it will be guaranteed a stable market share, with lower advertising costs and less sensitivity to price variations or potential problems with services. On the other hand, if repeaters spend less, the possibilities of offering both a high quality product and potentially renewing it to suit changing consumer needs, might be diminished. Despite the key role it plays in the definition of marketing strategies, the relationship between levels of repeat visitation and tourist expenditure has not received much attention in the literature. What is explored is the phenomenon of repeat visitation in an empirical, marginal way within the framework of an analysis of tourist expenditure, with hardly any reference to models of consumer behavior (Aguiló and Juaneda, 2000, Bowen and Shoemaker, 1998, Jang et al., 2004, McQueen and Miller, 1985, Mok and Iverson, 2000, Oppermann, 1996, Oppermann, 1997 and Petrick, 2004). Research using economic consumer models show two opposing trends in expenditure by repeat tourists. On the one hand, repeaters have a greater knowledge of the destination and thus can make a more efficient choice (based on lower prices) for all or some components of the cost of the trip. On the other hand, if quality ranks among their motivations, they will be prepared to pay a surcharge. A reduction in the holiday’s non-monetary costs and risk aversion could also be linked with a surcharge. This paper tests several hypotheses on repeat tourists’ expenditure based on economic analyses of consumer behavior. With data from one of the Mediterranean’s leading sun and sand destinations, the Balearic Islands of Spain, a model of tourist expenditure is estimated, examining the effect of repeated visitation, the knowledge of the destination, and the effect of quality as a motivation, including their interactions.

The aim of this paper is to contribute to studies on destination repeat visitation. For that purpose an economic analysis based on tourist expenditure has been adopted. Three fields of economic theory are used in the approach to repeat visitation: reputation models, market models with limited information, and loyalty and consumer behavior models. Although considerable work has been done in these fields of research, they have rarely been applied to tourism. This article focuses on the consequences of a prior visit on tourist expenditure. The analysis has significant repercussions on the marketing strategies used by destinations, particularly those in the mature stage of their lifecycle with a high percentage of repeaters. The results show that repeat visits imply lower expenditure in both the country of origin and the destination itself in comparison with spending by first-timers. The same can be stated when comparing expenditures by those making a different number of repeat visitations. As discussed, this would have two consequences: one, greater efficiency in the choice made by the consumer, due to the more extensive information repeaters have at their disposal because of prior experience; and, two, the big temporal and opportunity costs involved in finding out the numerous holiday and consumer alternatives on offer, which might induce first-timers to avoid them despite the genuine probability that they might end up paying a surcharge. For a destination in competition with similar ones, greater spending by first-timers can have negative effects. Although they might be willing to pay a surcharge in order to avoid the costs of searching for information, they might regard the price as unfair and react negatively, particularly with regard to the quality perceived (Oh 2003). Therefore, a review of price strategies, facilitating greater market transparency both in the country of origin and the destination, would help to ensure the survival of the latter. Tourists’ perception of quality plays a key role in satisfaction, influencing whether they intend to go back to a destination and what they expect to find on future visits. This has been regarded as a key variable in its relation with repeat visitation and expenditure. The results of the empirical model highlight the importance of quality, both in terms of the hotel and its surroundings. Tourists motivated by quality account for higher expenditure, however many visits they have made. Economic reputation models show that in markets where buyers cannot find out the quality of a product until they consume it, sellers can only offer a high quality product if they get a price premium in return. This would account for the fact that tourists motivated by quality are reconciled to paying more in the holiday destination and in their country of origin. It can be advantageous for a destination to concentrate on quality despite the need to set higher prices. Tourists in search of a certain degree of quality seem willing to pay a premium for it, thus acknowledging that higher prices are a sign and guarantee of better quality. Finally, the estimated model has allowed one to pinpoint higher spending among tourists on repeat visits to a specific area, even if they declare that they are not motivated by the quality of the destination. This effect contradicts lower expenditure by repeat tourists and, although it was not possible to discriminate between the different hypotheses that might explain this phenomenon (lower non-monetary costs, a high quality area or emotional attachment), it can be concluded that it seems advisable for destinations to promote quality as a whole and to foster a sense of emotional place attachment. The conclusions obtained from the study are valid for many destinations and they can help to define or justify market strategies to promote customer loyalty and create a high quality product or service. For this reason, further studies are needed to explore the economic consequences of repetition in resort destinations. Likewise, theoretical models should be developed to complement more general economic ones, taking into consideration any necessary modifications that are required for analyses in the field of tourism.