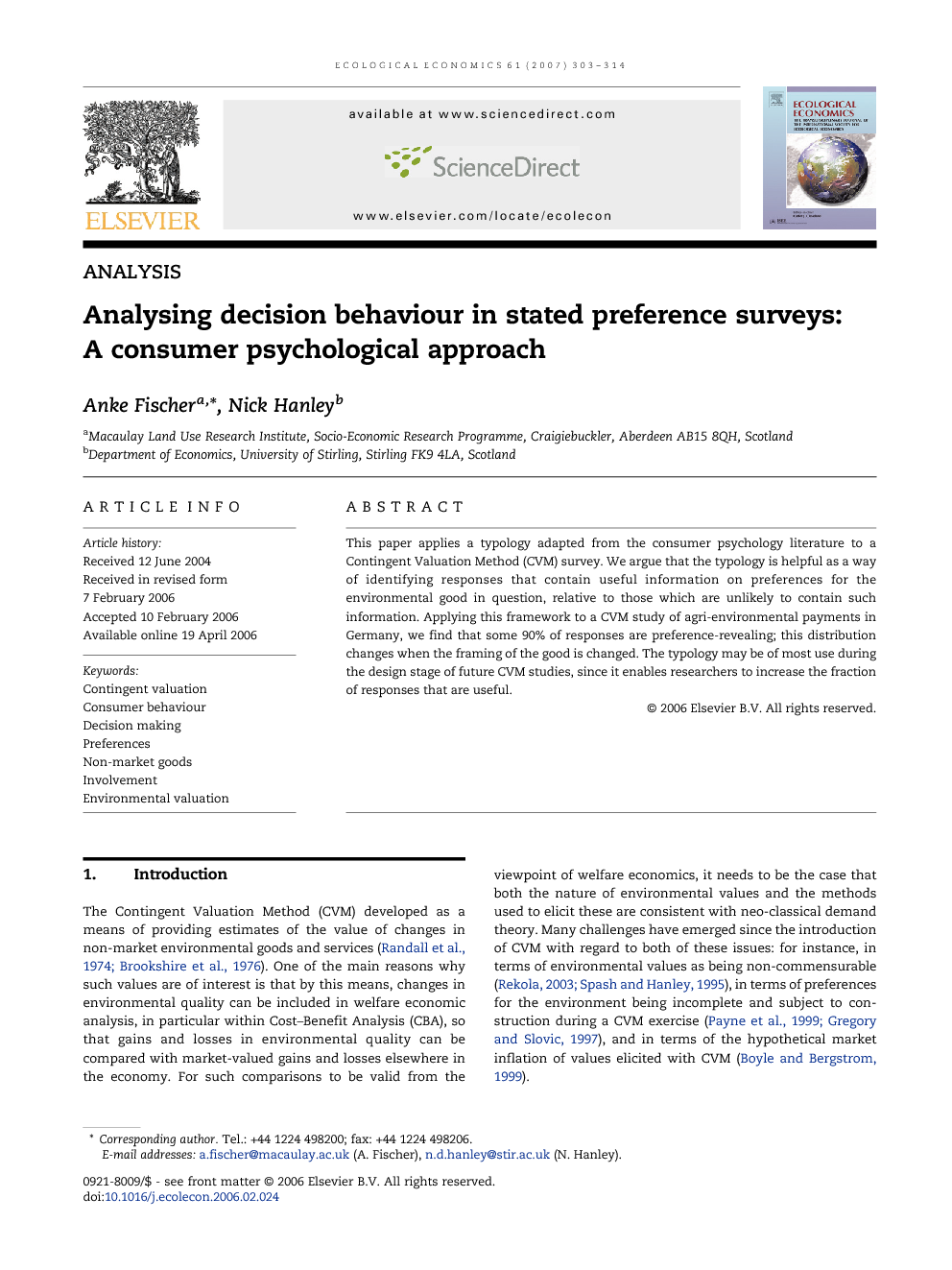 This paper applies a typology adapted from the consumer psychology literature to a Contingent Valuation Method (CVM) survey. We argue that the typology is helpful as a way of identifying responses that contain useful information on preferences for the environmental good in question, relative to those which are unlikely to contain such information. Applying this framework to a CVM study of agri-environmental payments in Germany, we find that some 90% of responses are preference-revealing; this distribution changes when the framing of the good is changed. The typology may be of most use during the design stage of future CVM studies, since it enables researchers to increase the fraction of responses that are useful.

The Contingent Valuation Method (CVM) developed as a means of providing estimates of the value of changes in non-market environmental goods and services (Randall et al., 1974 and Brookshire et al., 1976). One of the main reasons why such values are of interest is that by this means, changes in environmental quality can be included in welfare economic analysis, in particular within Cost–Benefit Analysis (CBA), so that gains and losses in environmental quality can be compared with market-valued gains and losses elsewhere in the economy. For such comparisons to be valid from the viewpoint of welfare economics, it needs to be the case that both the nature of environmental values and the methods used to elicit these are consistent with neo-classical demand theory. Many challenges have emerged since the introduction of CVM with regard to both of these issues: for instance, in terms of environmental values as being non-commensurable (Rekola, 2003 and Spash and Hanley, 1995), in terms of preferences for the environment being incomplete and subject to construction during a CVM exercise (Payne et al., 1999 and Gregory and Slovic, 1997), and in terms of the hypothetical market inflation of values elicited with CVM (Boyle and Bergstrom, 1999). In this paper, we are concerned with investigating how well CVM responses match up to what might be called a fundamental requirement: that they provide information on preferences, whether pre-existent or constructed (Gregory et al., 1993 and Bettman et al., 1998). A reasonable proposition is that individuals construct preferences, rather than retrieving them, when asked to evaluate a good they are not familiar with (e.g., Payne et al., 1999). Still, constructed preferences have to be relatively persistent over time to provide a basis for a reliable and feasible valuation of non-market goods (Hanemann, 1994). For this to be so, CVM studies need to be designed in a way which minimises responses which are not based on a careful consideration of preferences, whether constructed or pre-existent: for example, which are motivated by warm glow effects (Andreoni, 1989 and Nunes, 2002), or which are impulsive reactions to provocative verbal or visual cues within the survey instrument. To investigate this issue, we make use of a system of classifying responses adopted from consumer psychology, which was developed in the product life cycle literature (e.g., Howard, 1994) and which is now widely used in consumer research (e.g., Koester, 1992, Kearsley, 1995 and Antonides and van Raaij, 1998). This allows us to identify response categories which lie either side of the neo-classical behavioural ideal of agents carefully considering their preferences subject to a budget constraint. It also provides a means of designing CVM surveys to minimise the prevalence of problematic responses which are unreliable or invalid from a CBA perspective. To preview, we find that around 90% of responses to a CVM survey on the conservation of landscape features on farmland in Germany could be placed in either of two response categories (“extensive” and “limited” responses) which we argue correspond to a careful consideration of preferences, with only 10% belonging to two categories which we argue do not meet this requirement (“habitual” and “impulsive” responses). This division changes when different verbal cues are introduced.

A major concern in applying the Contingent Valuation Method to environmental valuation is whether respondents act in accord with economic theory. The Weinberg typology set out in this paper turns out to be helpful to CVM researchers in that it helps identify which decision-types respondents fall into. This provides the researcher with an additional tool for filtering out responses which are not in accord with the neo-classical idea of respondents undertaking a careful consideration of their preferences prior to choosing, which in turn underlies the welfare economics basis of cost–benefit analysis. The typology also allows warm-glow responses to be identified, described here as habitualised behaviour, where respondents provide a WTP value which is not specific to the environmental good under consideration, but which instead reflects what the individual considers an appropriate level of charitable giving. We find, however, that decision behaviour is affected by the framing of the CVM exercise, in that choices of “provocative” words or bid vehicles can increase the fraction of respondents that are classified as “impulsive”. This is to be expected from our definition of this behaviour type. Other aspects of the framing of the good might also play an important role in determining the fraction of impulsive responses. The multinomial logit modelling showed that response mode was partly determined by prior knowledge: this implies that the choice of a valuation subject by the researcher and hence the prior knowledge of respondents on this subject has an impact on the proportion of preference-based responses. Finally, we argue that using such classification systems for decision-making types can serve as a useful tool in the design phase of a CVM survey to maximise the proportion of preference-based responses, and thus the usefulness of the exercise in a welfare economics context.