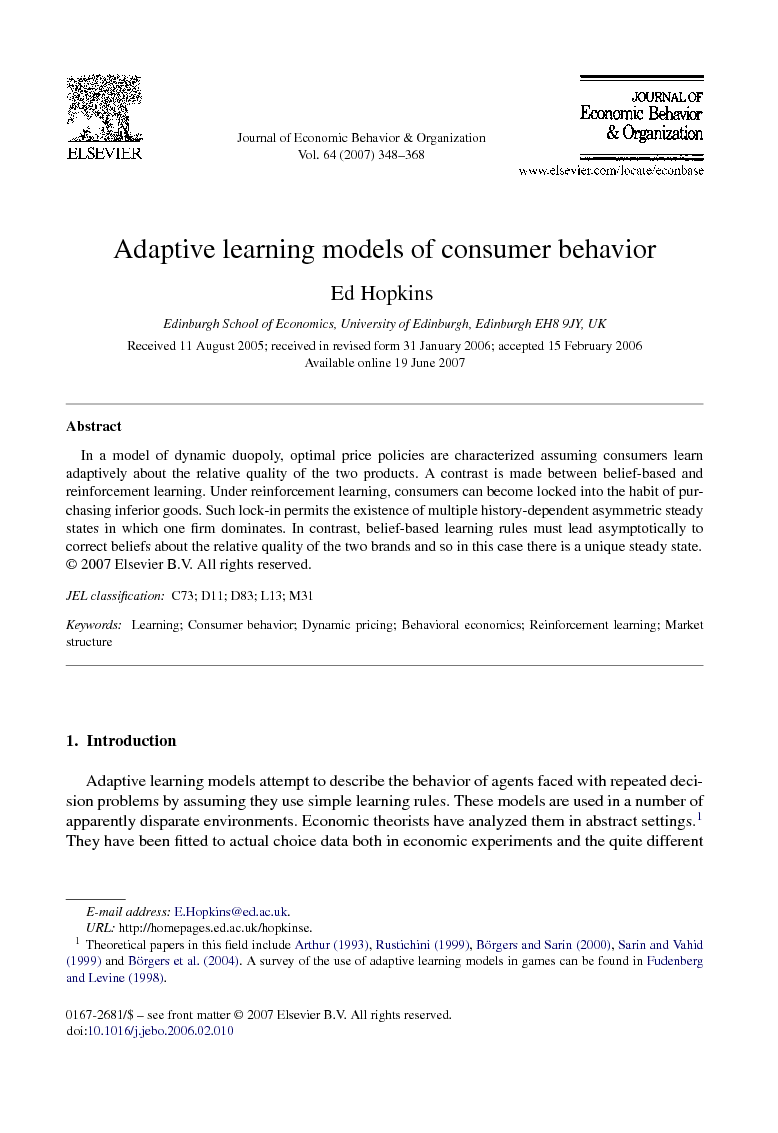 In a model of dynamic duopoly, optimal price policies are characterized assuming consumers learn adaptively about the relative quality of the two products. A contrast is made between belief-based and reinforcement learning. Under reinforcement learning, consumers can become locked into the habit of purchasing inferior goods. Such lock-in permits the existence of multiple history-dependent asymmetric steady states in which one firm dominates. In contrast, belief-based learning rules must lead asymptotically to correct beliefs about the relative quality of the two brands and so in this case there is a unique steady state.

This paper explores the consequences of recent advances in adaptive learning theory for the analysis of consumer behavior. The case of experience goods corresponds to partial information in the learning literature. Two different models of learning are compared in this setting. The first, a model of reinforcement learning, may be biased with consumers becoming locked into inferior choices. This leads to the possibility of multiple steady states. When there are multiple states, the stable ones are those which involve dominance by one firm. Under a model of belief-based learning due to Sarin and Vahid, consumers will learn accurately in the long run, and so there is only one long run equilibrium. However, in the short run a seller has an incentive to charge a price different from the myopic maximum to affect the speed at which consumers learn. Whether these different models can be separated empirically is an interesting question. The availability of consumer scanner data now permits investigation by the examination of individual consumer behavior. In Section 7 of this paper, two simple tests for the identification of different types of learning behavior were suggested. Some of the existing empirical evidence, both from the laboratory and field consumer data, seems to give greater support for the reinforcement learning model that predicts suboptimal behavior even in the long run. The market outcomes under reinforcement learning are probably best interpreted as an important first mover advantage. Familiarity with an existing brand will make the establishment of an alternative difficult, even if it is higher quality, at least under price competition. It is an open question whether there would be a different conclusion if other forms of competition were included. For example, it has long been asserted that certain forms of advertising convey no information, but only serve to aid familiarity. Thus, the investigation of the effect of advertising when consumers are reinforcement learners seems a natural complement to the current research. The assumptions and methodology employed in this paper are quite different from those of the strategic approach to dynamic pricing. It would be interesting to analyze the robustness of the two types of model. In particular, both the assumption that all consumers can act as though they understand the intuitive criterion and the present alternative, that all consumers are incapable of any strategic inference, seem extreme. Some heterogeneity amongst consumers would seem more reasonable. For example, how would the current results change if a proportion of consumers were sophisticated rather than adaptive? Or, for example, can one successfully signal high quality when such a signal is simply not understood by a proportion of its intended audience? As a final remark, the existing experimental evidence, for example, Cooper et al. (1997), as well as supporting heterogeneity, suggests that adaptive learning does better than equilibrium refinements at explaining actual human behavior.