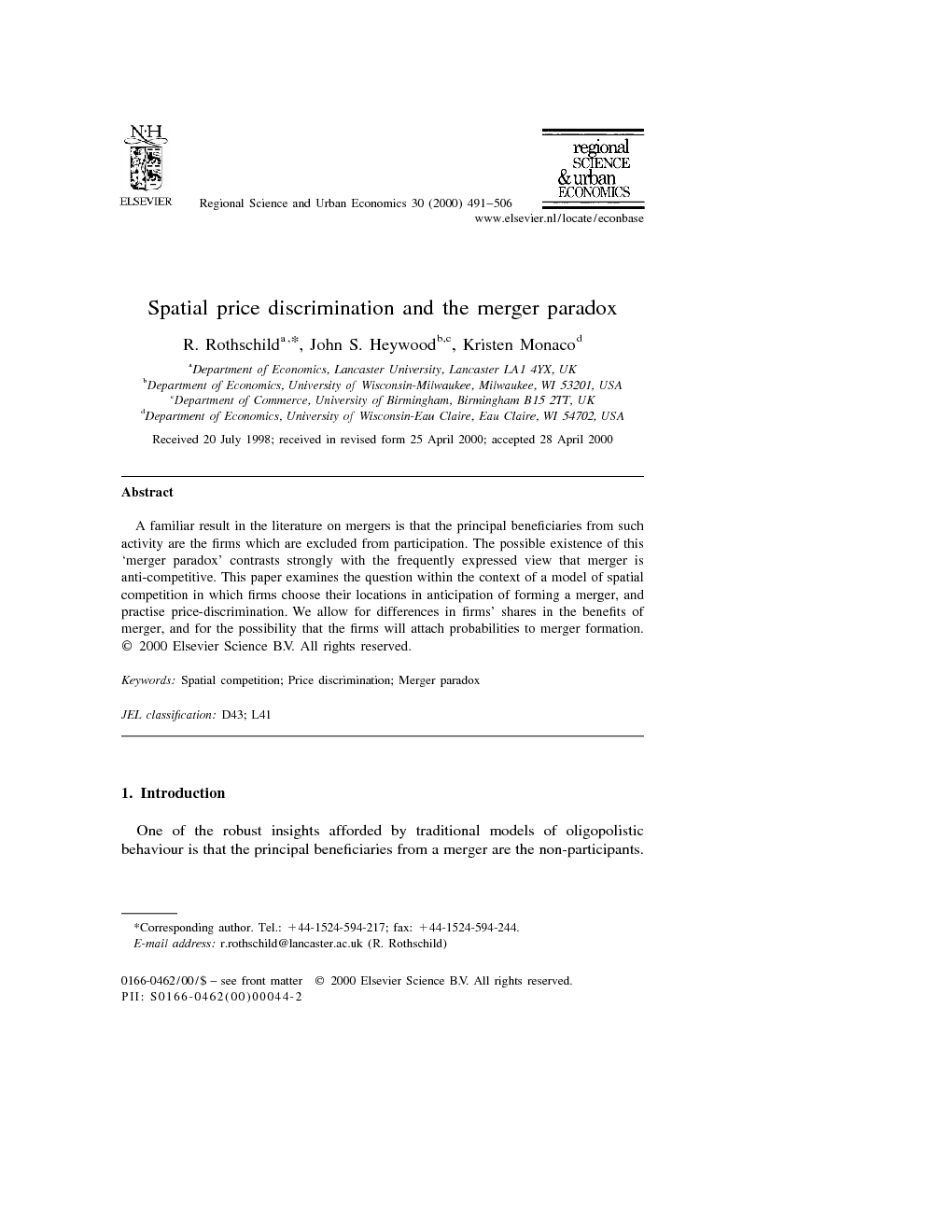 A familiar result in the literature on mergers is that the principal beneficiaries from such activity are the firms which are excluded from participation. The possible existence of this ‘merger paradox’ contrasts strongly with the frequently expressed view that merger is anti-competitive. This paper examines the question within the context of a model of spatial competition in which firms choose their locations in anticipation of forming a merger, and practise price-discrimination. We allow for differences in firms’ shares in the benefits of merger, and for the possibility that the firms will attach probabilities to merger formation.

The ‘merger paradox’ arises when the principal beneficiaries to a merger are those firms which are excluded from the process. As noted in the Introduction, the theoretical possibility that this phenomenon might exist sits somewhat uncomfortably alongside the popular perception that, in general, merger harms outsiders. The purpose of this paper has been to attempt a reconciliation of theory and practical experience. Our interest has therefore focused on the circumstances in which merger is simultaneously (a) individually rational, (b) anti-competitive and (c) welfare reducing. Our results show that, first, on one criterion of welfare (viz transport costs), all merger, irrespective of the distribution of benefits between the firms involved, reduces social welfare. We have also been able to show that the magnitude of the effect on welfare does depend upon the precise distribution of these benefits. Second, our results show that when merger is individually rational, the gains to the participants exceed that of the excluded firm. Third, with or without merger, the ‘middle’ firm (L2) obtains lower profits than does the potentially excluded rival. 13 Moreover, as the share of L1 in the gain from merger increases, all firms move rightwards, and consequently the profits of both L2 and the excluded rival fall. Fourth, there exists a wide range of α for which merger is individually rational (that is, [0.34,0.89], approximately). Yet, only a small part of this range ([0.87,0.89], approximately) is associated with harm to the excluded rival. Thus, individually rational participation is generally not anti-competitive. With the exception of the narrow range identified above, anti-competitive mergers occur only when L2 is ‘pressured’ into unprofitable participation. The most damaging instance of the phenomenon occurs when α=1, when the negative deviation (for both L2 and L3) from the no-merger level of profits is maximised. Fifth, when merger does not occur with certainty (that is, when 1>ρ≥0) the profits of the three firms can be shown to reflect the impact of changes in α, given ρ, and changes in ρ, given α. In all of these cases, it is clear that, irrespective of ρ, the party with the larger expected share in incremental profits gains at the expense of the other firms. Conversely, given any expected allocation of incremental profits between the parties to the merger, and subject to both the individual rationality requirement and the effect of large α on the excluded rival, the profits of all firms will in general be lower as the probability of merger is smaller.