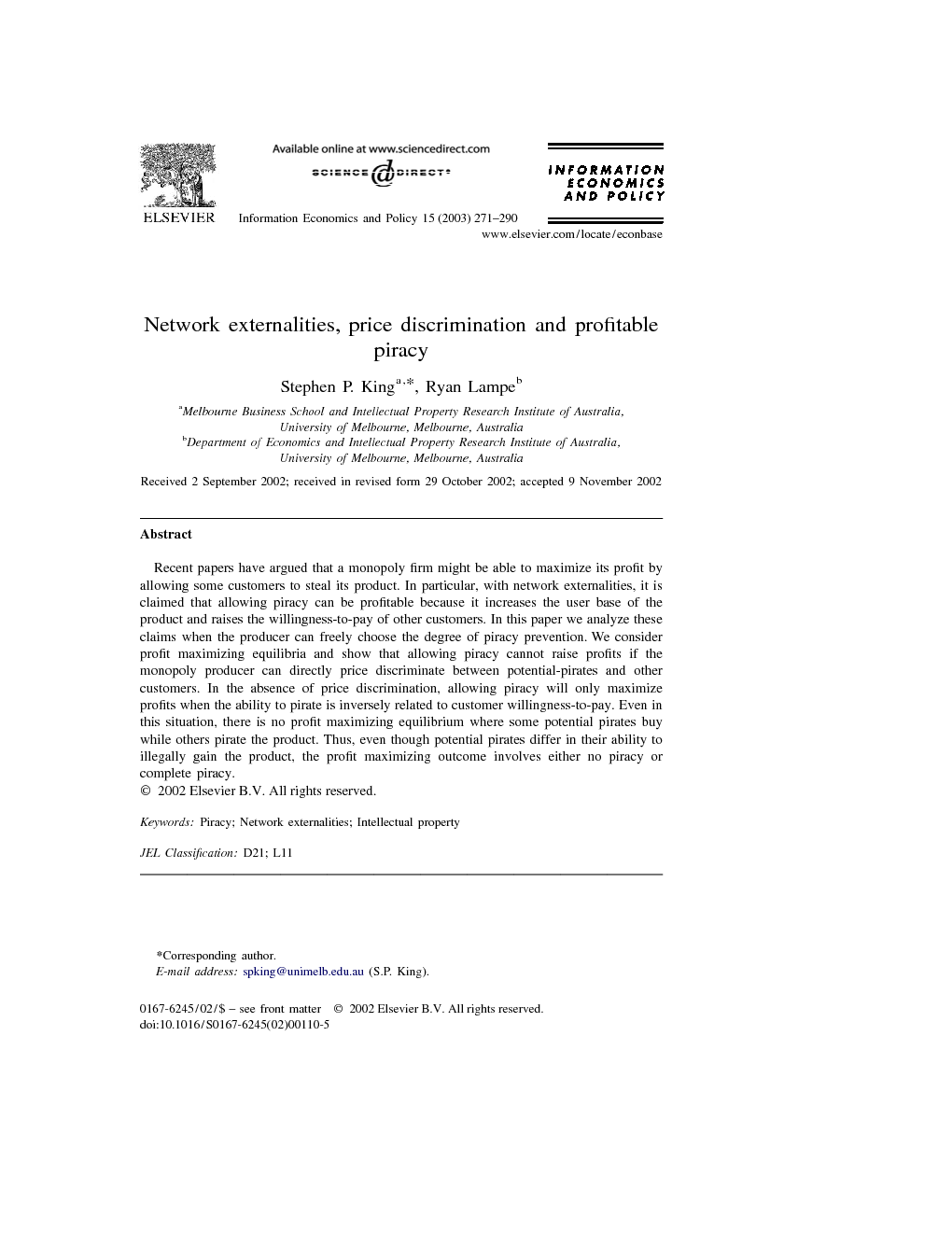 Recent papers have argued that a monopoly firm might be able to maximize its profit by allowing some customers to steal its product. In particular, with network externalities, it is claimed that allowing piracy can be profitable because it increases the user base of the product and raises the willingness-to-pay of other customers. In this paper we analyze these claims when the producer can freely choose the degree of piracy prevention. We consider profit maximizing equilibria and show that allowing piracy cannot raise profits if the monopoly producer can directly price discriminate between potential-pirates and other customers. In the absence of price discrimination, allowing piracy will only maximize profits when the ability to pirate is inversely related to customer willingness-to-pay. Even in this situation, there is no profit maximizing equilibrium where some potential pirates buy while others pirate the product. Thus, even though potential pirates differ in their ability to illegally gain the product, the profit maximizing outcome involves either no piracy or complete piracy.

In this paper we have developed a simple model to analyze the proposition that, in the presence of network externalities, a firm’s profits can increase if that firm allows some consumers to pirate its products because this raises the user base and the willingness-of-pay of other customers. We have shown that this concept of ‘profitable piracy’ depends critically on certain assumptions about both the customers’ and the firm’s behavior. In particular, in a profit maximizing equilibrium, piracy, from the perspective of a single firm, is always dominated by price discrimination. If the firm can differentiate customer prices on the basis of ability to pirate, then this is always preferred to allowing piracy. Price discrimination allows the firm to exploit any network benefits from spreading use of their product while also raising revenue. In this sense, piracy is, at best, an inferior alternative to price discrimination. We also showed, even in the absence of price discrimination, that piracy provides a very ‘blunt instrument’ to expand the user base. Piracy may be profitable, but if it is profit maximizing to allow any customer to pirate then it is also profitable to allow all other similar customers to pirate. In this sense, piracy is more like an organized product ‘give-way’ aimed at buyers with a low intrinsic value for the product. There is no non-trivial piracy in the sense that some low value consumers purchase and others pirate. Our results show that the claims for profitable piracy based on the feedback between user-base and paying customers must be carefully examined. The underlying logic behind such claims of profitable piracy is simply the logic of price discrimination. Unless there is a reason to believe that potential pirates will systematically value a product less than other buyers and that there are relatively few pirates, then allowing IP rights to be degraded will not be in a firm’s interest. Our analysis has focused on one of the arguments for profitable piracy. As mentioned in the introduction, alternative arguments have been presented in the literature based on dynamic firm pricing and strategic interactions. Our model has also highlighted alternative ways in which a firm might be forced to exploit piracy to raise profits. In particular, if a seller is ‘stuck’ in equilibrium were no-one buys the product because of a rational fear of a low user base, allowing piracy might be a way to ‘break’ this equilibrium. While the resulting outcome for the seller will not be a global profit-maximizing equilibrium (of the type considered above) it will be better than equilibrium where no-one buys the product. The potential for such suboptimal equilibria and the role of allowing piracy to avoid such outcomes is an avenue for future research.