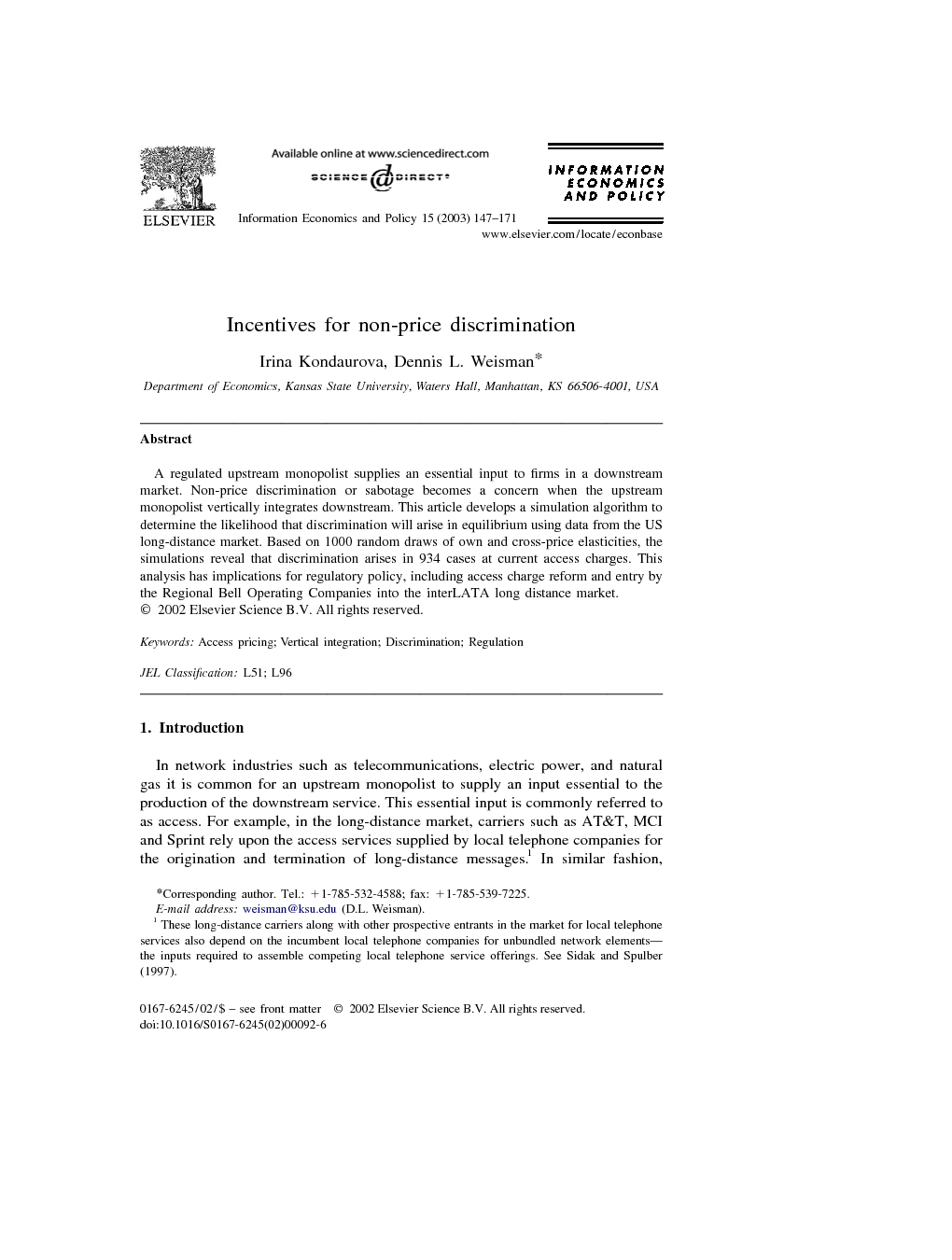 A regulated upstream monopolist supplies an essential input to firms in a downstream market. Non-price discrimination or sabotage becomes a concern when the upstream monopolist vertically integrates downstream. This article develops a simulation algorithm to determine the likelihood that discrimination will arise in equilibrium using data from the US long-distance market. Based on 1000 random draws of own and cross-price elasticities, the simulations reveal that discrimination arises in 934 cases at current access charges. This analysis has implications for regulatory policy, including access charge reform and entry by the Regional Bell Operating Companies into the interLATA long distance market.

In network industries such as telecommunications, electric power, and natural gas it is common for an upstream monopolist to supply an input essential to the production of the downstream service. This essential input is commonly referred to as access. For example, in the long-distance market, carriers such as AT&T, MCI and Sprint rely upon the access services supplied by local telephone companies for the origination and termination of long-distance messages.1 In similar fashion, stand-alone Internet service providers may be dependent in certain regions on the high-speed access lines of a combined AOL–Time Warner. In the electric power industry, entrants are dependent on the distribution facilities of incumbent providers to serve retail customers. Hence, while the focus of this analysis is on the US telecommunications market, the basic problem we examine is more general. A commonly voiced concern is that a vertically integrated provider (VIP) will have the incentive to degrade the quality of access provided to independent rivals in order to favor its downstream operations.2 In fact, allegations that AT&T had engaged in discriminatory practices against its rivals in the long distance market resulted in the Regional Bell Operating Companies (RBOCs) being prohibited from participating in the interLATA long-distance under the terms of the 1984 Bell System Divestiture.3 Section 271 of the 1996 Telecommunications Act allows the RBOCs to petition for entry into the (in-region) InterLATA long-distance market once they have opened their local telephone markets to competition and have satisfied a 14-point competitive checklist.4 The purpose of this checklist is, in part, to ensure that the RBOCs do not have the opportunity to discriminate against their rivals in the downstream long-distance market as a result of their control over an essential input to production (access). Discrimination occurs when the RBOC intentionally degrades the quality of the access service provided to downstream competitors with the effect of raising rivals’ costs.5 The incentives for non-price discrimination in a Cournot framework have been examined in a number of recent studies including Sibley and Weisman (1998), Economides (1998), Mandy (2000), Weisman and Kang (2001) and Weisman and Williams (2001). This research is concerned primarily with identifying the conditions under which the incentive to discriminate arises (respectively, does not arise) in equilibrium. The main finding of this research is that the independent rivals must be significantly more efficient that the VIP in the downstream market in order for the incentive to discriminate not to arise in equilibrium. The analysis of the incentive to discriminate in a Bertrand framework has been examined in Weisman, 1995 and Weisman, 1998, Reiffen (1998) and Beard et al. (2001). Whereas, the Cournot analyses of discrimination focus on relative efficiency differences between independent rivals and the VIP, the incentive to discriminate in a Bertrand framework turns on the firm-specific own and cross-price elasticities. The main finding of this research is that the incentive to discriminate will typically arise in equilibrium when the cross-price elasticities are sufficiently large, ceteris paribus. Mandy and Sappington (2001) examine the incentives for both cost-increasing sabotage and demand-reducing sabotage. They find that cost-increasing sabotage is typically profitable under both Bertrand and Cournot competition. In contrast, demand-reducing sabotage is often profitable under a Cournot competition, but unprofitable under Bertrand competition. Finally, empirical analysis of the incidence of non-price discrimination is limited. Reiffen and Ward (2002) find some evidence of non-price discrimination in cellular telephony, though it does not necessarily rise to a level that would justify a prohibition on vertically integrated supply given the prospective loss of scope economies. Crandall (2001, p. 33) finds that formal complaints concerning violation of interconnection rules under the 1996 Telecommunications Act occur in only about 1% of the sample of agreements between incumbent providers and competitive local exchange carriers. The primary objective of this research is to develop a methodology to estimate the likelihood that the incentive to discriminate will arise in equilibrium based on a given distribution of firm-specific own and cross-price elasticities. The incentive to discriminate exists when the VIP earns higher profits when the rival is foreclosed from the downstream market relative to the non-discrimination outcome. This methodology is then applied to the long-distance market in the United States in order to assess the risk of discriminatory behavior posed by allowing the RBOCs into the interLATA long distance market and how this risk varies with key market parameters (e.g. initial market shares and prices) as well as key regulatory parameters (e.g. access charges). We find that the number of cases in which discrimination arises is very sensitive to initial market shares and downstream prices. For instance, when the independent rival’s initial market share is 50% and the initial downstream price is 15 cents, the number of discrimination cases is 934 of 1000; for a market share of 60% and the same initial price, the number of discrimination cases falls to 319. The simulation analysis reveals that the number of discrimination cases in equilibrium increases when the initial prices increase and/or the independent rival’s initial market share decreases. The number of discrimination outcomes decreases when the access charge increases. We find that the number of discrimination cases is small when the cross-price elasticity is small or the own-price elasticity of the rival firm is large (in absolute value). The simulations also reveal that when the access price is close to marginal cost, the number of the discrimination cases remains very large even if all other parameter values are conducive to non-discrimination outcomes. The elasticity of the percentage of discrimination outcomes with respect to access charges is estimated for various initial parameters. Finally, the distributions of the elasticities that correspond to discrimination and non-discrimination outcomes in equilibrium are constructed. This analysis identifies the elasticity regions that correspond to discrimination and non-discrimination outcomes, respectively. The format for the remainder of this article is as follows. In Section 2, we introduce the notation and the basic structure of the model. In Section 3, we conduct numerical simulations to evaluate the incentives for discrimination under different initial conditions. Section 4 contains the policy implications and conclusion.