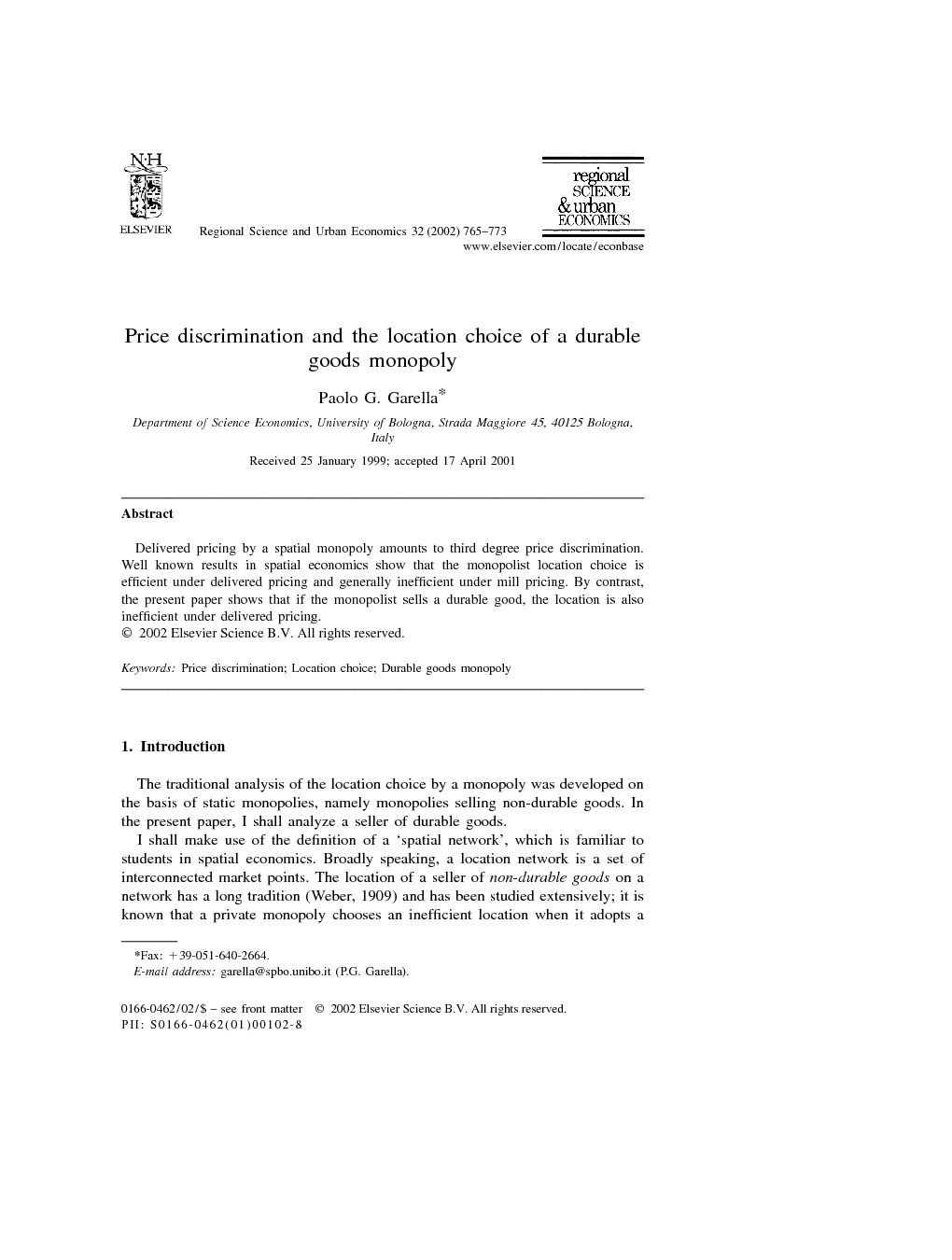 The traditional analysis of the location choice by a monopoly was developed on the basis of static monopolies, namely monopolies selling non-durable goods. In the present paper, I shall analyze a seller of durable goods. I shall make use of the definition of a ‘spatial network’, which is familiar to students in spatial economics. Broadly speaking, a location network is a set of interconnected market points. The location of a seller of non-durable goods on a network has a long tradition ( Weber, 1909) and has been studied extensively; it is known that a private monopoly chooses an inefficient location when it adopts a mill pricing policy, and a socially optimal location under delivered pricing ( Gabszewicz-Jaskold and Thisse, 1986a). Under mill pricing the consumers bear the transportation cost. However, under delivered pricing the monopolist directly bears the transportation costs; this is why, in this case, the seller chooses the location on the network which is socially optimal, given the quantities he decides to sell. 1 The question in the present paper is whether a monopolist who sells a durable good will locate in the same way as predicted by the theory for standard monopolies. Although the literature on durable goods monopoly is rather large, it has not considered the location problem. A summary of this literature is beyond the scope of the present paper; however, it is worth recalling some of its fundamental features. In a deterministic context it is well understood that the durable good differs from the static (non-durable) monopoly only if the seller cannot commit to a sequence of prices over time. This absence of commitment creates an incentive to reduce prices in the future; the reason for this is that buyers who have bought in the past do not re-enter the market so that the monopoly can sell only to consumers with a lower and lower valuation of the good. This is known to be harmful to the monopolist, and I shall refer to this situation as the ‘Coase problem’ from Coase (1972). It can be shown that the monopolist’s intertemporal profits in the absence of commitment are lower than they could be under full commitment. The gist of the argument is that consumers will correctly anticipate the price reductions and decide the date of purchase to their convenience. The monopolist is then in competition with its future self, as demand today depends upon prices tomorrow. Several ways of escaping from the Coase problem by gaining commitment on future prices have been identified in the literature, for instance renting instead of selling (Bulow, 1982), reducing the durability (Bulow, 1986), capacity limits (De Graba, 1995), or raising marginal cost functions (Kahn, 1986 and Karp and Perloff, 1996); rationing demand is another possibility (Denicolò and Garella, 1999). I shall show below that locating at some distance from the market nodes on a spatial network is also a way to escape from the Coase problem. Indeed, by locating at a sufficient distance from a given market node, the monopolist creates a lower bound for his future price on that node, exploiting the existence of transport costs. This is a way of buying some commitment on future prices. The need to gain commitment then, as shown below, may lead the monopolist away from the socially optimal location on a location network with several market nodes. The following analysis is based on a simple example with two market nodes. The case with one market node would boil down to the non-spatial case of a durable good monopolist with constant marginal costs, and the decision to locate away from the node would be equivalent to a voluntary increase of the marginal cost in the non-spatial setup. The analogy with the non-spatial interpretation, however, fails if there is more than one market node. Indeed, in the non-spatial context, or with one market node, there is no convenience in voluntarily raising a flat marginal cost: only if marginal costs are increasing can the durable good monopolist profit from raising them, as shown by Kahn (1986). One could apply the results to a model of product differentiation à la Hotelling (1929), reinterpreting the geographical space as a space of product characteristics, the two market nodes representing two alternative specifications of the good in a horizontal sense.2 Obviously, more general distributions of consumers over the characteristics space could be considered and the present paper in this respect is very limited in scope.

The literature on durable goods monopoly has so far neglected the location problems, and at the same time the literature on location and product specification has not been concerned with durable goods monopolies. The present paper shows that a price discriminating monopolist will not necessarily choose a socially optimal location. The reason for this is that, by voluntarily increasing the transportation cost, the seller can commit to a higher future price at the distant node. This ameliorates the profits on that node and, if this node is important enough, total profits can be increased. Third degree price discrimination is implied here by the delivered price model. A long established literature3 on the welfare effects of third degree price discrimination has clarified that it may not be socially optimal to compel a monopolist to use a uniform price (either a mill price or a uniform delivered price in a spatial model) as this may result in welfare losses (recent examples are Malueg and Schwartz, 1994; Layson, 1994; see also Shin et al., 1988; while Bilas, 1969, considers multiple plant firms). The welfare comparisons in the literature generally hinge upon the quantity sold on each market or upon the suppression of sales in some of the markets. Market separability (geographic or other) is clearly essential to third degree price discrimination.4 Location effects on welfare have been considered in Anderson et al. (1992), where an analysis is also provided of the number of different specifications introduced into a market. The results above are insufficient to derive general conclusions about the output effects of price discrimination, although they provide some hints. Note, indeed, that in the example considered in Section 2 the suboptimal location implies an increase in prices (lower output) at node A due to the commitment obtained by the monopolist. If the socially optimal location were imposed, then the monopolist would increase output, with beneficial effects on welfare. Finally, the present paper leaves open some issues for further research. A major issue seems to be the location choice of durable goods oligopolists, and the study of durable product differentiation under oligopolistic rivalry. A second issue is the location of multiplant, or multiproduct, firms.