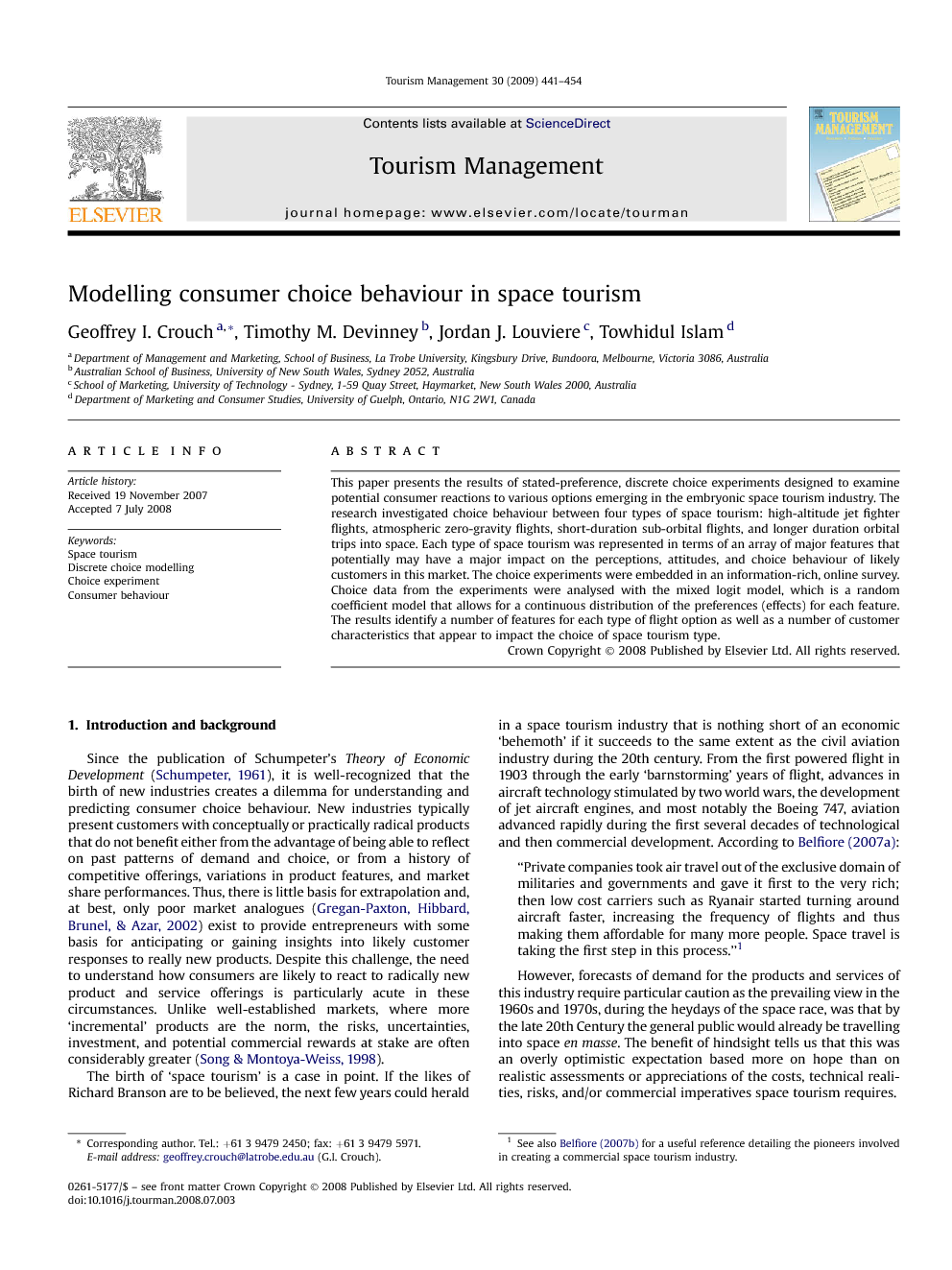 This paper presents the results of stated-preference, discrete choice experiments designed to examine potential consumer reactions to various options emerging in the embryonic space tourism industry. The research investigated choice behaviour between four types of space tourism: high-altitude jet fighter flights, atmospheric zero-gravity flights, short-duration sub-orbital flights, and longer duration orbital trips into space. Each type of space tourism was represented in terms of an array of major features that potentially may have a major impact on the perceptions, attitudes, and choice behaviour of likely customers in this market. The choice experiments were embedded in an information-rich, online survey. Choice data from the experiments were analysed with the mixed logit model, which is a random coefficient model that allows for a continuous distribution of the preferences (effects) for each feature. The results identify a number of features for each type of flight option as well as a number of customer characteristics that appear to impact the choice of space tourism type.

This study confirms the implied assumption of previous research that potential space tourism customers are likely to be highly sensitive to price. The findings also show that there is considerable heterogeneity between respondents in terms of how they are likely to react to price when choosing between the different types of space tourism. The research also points to the significant role of other potentially important demand determinants. In terms of the features of a space tourism product, prominent determinants included the nationality of the operator (which may also have served as a proxy for other factors related to quality, risk, and convenience), the physical requirements placed on passengers, the level of passenger space or crowding, and the extent of pre-flight training required. Among the characteristics of the potential customer, gender, age, education, and the extent of other risk-taking behaviour typically played an important role in influencing choice. The results of this research indicate broadly that there is a significant portion of the public, in general, and of high-income/high-net-worth individuals in particular, who are favourably disposed towards engaging in some form of commercial space tourism flight activity. There are several different alternative forms of space tourism possible and, within each, there is likely to be a growing number of competing space tourism ventures to emerge over time. It has been observed in the early years of other ‘new’ industries, when the way forward is clouded by uncertainty – uncertainty in regards to: customer choice behaviour and preferences, technological foundations, and the dynamics of cost – that enterprises search for the best ‘business model’. At some point, however, typically such new industries undergo a shake-up during which a number of the early entrants exit the market as the business model they adopted turned out ultimately to be uncompetitive. Competitive business models for space tourism will comprise those which provide the right tradeoff between what customers most desire, and what technology is capable of delivering, at a price (and cost) that can keep pace with the declining cost of competitor operations as economies of scale unfold and as learning effects accumulate. Understanding what customers desire will, therefore, be a key ingredient to success. Although the scope of this study is modest, it has demonstrated that the tools for investigating this are available. Further ongoing research into space tourism consumer choice behaviour is bound to become a critical, continuous need as commercial space tourism unfolds in the years ahead. As experience from the commercial civil aviation industry analogue of the 20th century demonstrates, changes in technology, competition, the economy, society, legal and regulatory frameworks, demography, and the environment will necessitate many such consumer studies in the long run. Having demonstrated that private, commercial space tourism operators are capable of designing and building a sub-orbital spacecraft, the space tourism industry now faces questions about how to sell technological space flight solutions to potential consumers. Thus accurate marketing research is crucial for designing commercial space tourism experiences based on sound understanding of likely future consumer choices. The industry faces a major challenge in conducting sound, reliable, state-of-the-art research for a product with no history, numerous potential product configurations and little consumer understanding of risks and benefits. Our empirical results show that one can potentially overcome the challenges to estimate a good first approximation to the potential demand for space tourism based on sound theory and methods. We were able to deal with the challenges by addressing several issues. Firstly, we avoided the ambiguity and open-endedness of previous research in which respondents were not required to make tradeoffs. Second, we used well-tested theory and methods to model and predict demand for space tourism by using information acceleration methods to inform and educate respondents about the features of space tourism products and services; and we modelled the resulting choices with state-of-the-art discrete choice models. The use of a robust multimedia platform allowed us to execute the IA experiments fast and economically, which allowed us to integrate multiple layers in our experiments. In turn, this allowed us to simulate various market contexts as realistically as possible. Finally, we took advantage of recent advances to examine the evolution of customer choices as the market develops by using dynamic experiments