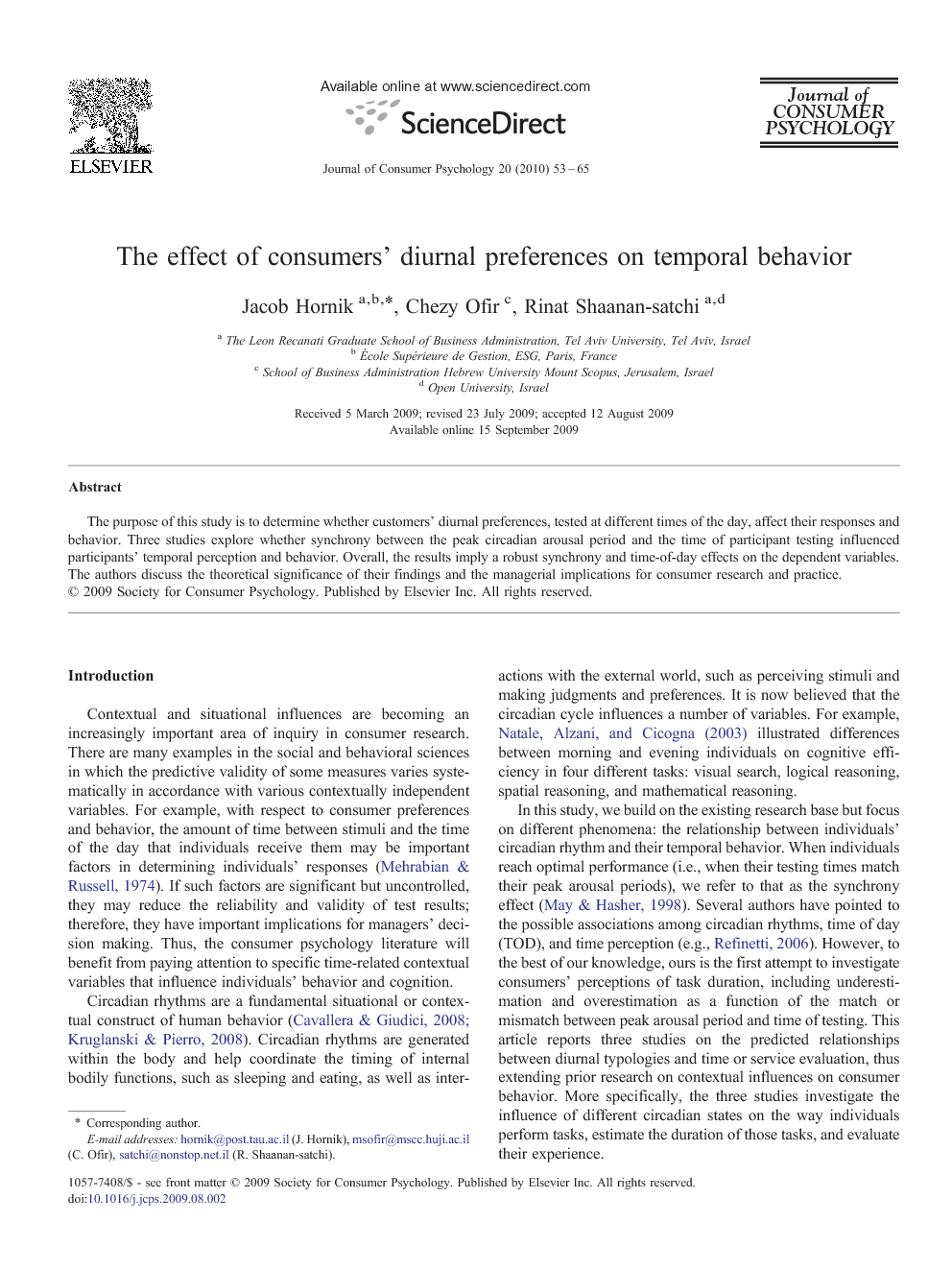 The purpose of this study is to determine whether customers' diurnal preferences, tested at different times of the day, affect their responses and behavior. Three studies explore whether synchrony between the peak circadian arousal period and the time of participant testing influenced participants' temporal perception and behavior. Overall, the results imply a robust synchrony and time-of-day effects on the dependent variables. The authors discuss the theoretical significance of their findings and the managerial implications for consumer research and practice.

Contextual and situational influences are becoming an increasingly important area of inquiry in consumer research. There are many examples in the social and behavioral sciences in which the predictive validity of some measures varies systematically in accordance with various contextually independent variables. For example, with respect to consumer preferences and behavior, the amount of time between stimuli and the time of the day that individuals receive them may be important factors in determining individuals' responses (Mehrabian & Russell, 1974). If such factors are significant but uncontrolled, they may reduce the reliability and validity of test results; therefore, they have important implications for managers' decision making. Thus, the consumer psychology literature will benefit from paying attention to specific time-related contextual variables that influence individuals' behavior and cognition. Circadian rhythms are a fundamental situational or contextual construct of human behavior (Cavallera and Giudici, 2008 and Kruglanski and Pierro, 2008). Circadian rhythms are generated within the body and help coordinate the timing of internal bodily functions, such as sleeping and eating, as well as interactions with the external world, such as perceiving stimuli and making judgments and preferences. It is now believed that the circadian cycle influences a number of variables. For example, Natale, Alzani, and Cicogna (2003) illustrated differences between morning and evening individuals on cognitive efficiency in four different tasks: visual search, logical reasoning, spatial reasoning, and mathematical reasoning. In this study, we build on the existing research base but focus on different phenomena: the relationship between individuals' circadian rhythm and their temporal behavior. When individuals reach optimal performance (i.e., when their testing times match their peak arousal periods), we refer to that as the synchrony effect (May & Hasher, 1998). Several authors have pointed to the possible associations among circadian rhythms, time of day (TOD), and time perception (e.g., Refinetti, 2006). However, to the best of our knowledge, ours is the first attempt to investigate consumers' perceptions of task duration, including underestimation and overestimation as a function of the match or mismatch between peak arousal period and time of testing. This article reports three studies on the predicted relationships between diurnal typologies and time or service evaluation, thus extending prior research on contextual influences on consumer behavior. More specifically, the three studies investigate the influence of different circadian states on the way individuals perform tasks, estimate the duration of those tasks, and evaluate their experience.

The objective of this article was to explore the concept of synchrony effect and to examine its underlining mechanisms using a fundamental consumer behavior measure—time. The concept of time has been hailed as fundamental to consumer behavior. The results suggest that the effect of diurnal variations on temporal performance is critically dependent on whether the customer is a morning or evening type. This research was inspired in part by recent calls for more realistic consumer research and models that monitor contextual and momentary influences on behavior (e.g., Schwarz, 2006). As such, this investigation provides a contribution to the growing empirical evidence on situational influences on consumer behavior. The meanings of the results are clear: a consumer's response is highly dependent on time of measurement and exposure. Synchrony effects seem to influence customers' time estimations, perception, and behavior. It appears, therefore, that TOD effects on task performance are far more complex and time specific than have been previously acknowledged (Hornik & Zakay, 1996). At the present state of knowledge, that behavior fluctuates rhythmically in time and with different recurrences for the different psychological functions may be considered experimentally verified. On both empirical and theoretical grounds, we have established that, in the morning, morning types perform better, tend to underestimate time duration, and show greater satisfaction from a service than they do later in the day (when they tend to overestimate). Evening types perform better and evaluate higher but tend to underestimate in the evening relative to earlier in the day (when they tend to overestimate). Also, both groups performed better when tested at their respective optimal times.