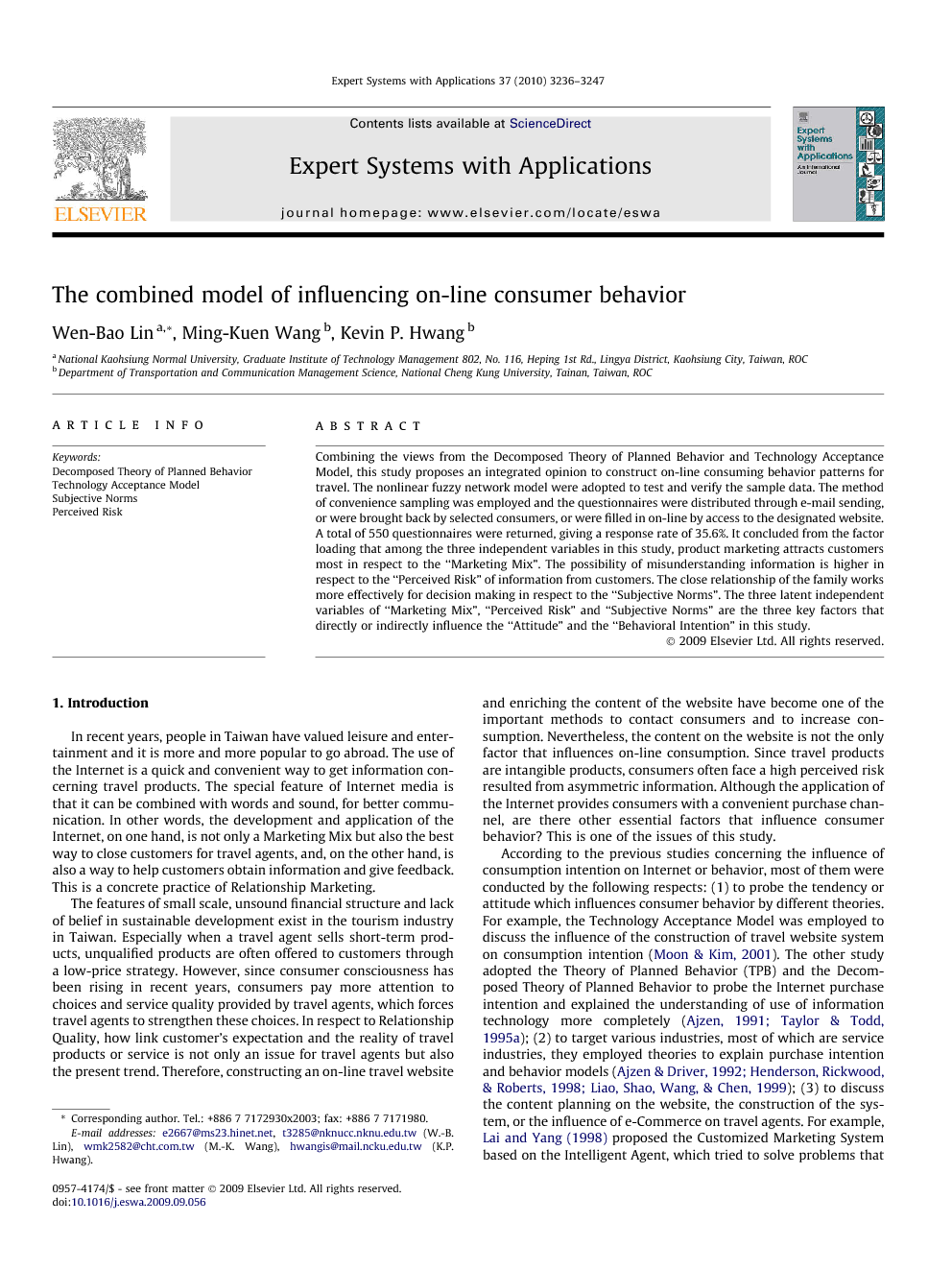 Combining the views from the Decomposed Theory of Planned Behavior and Technology Acceptance Model, this study proposes an integrated opinion to construct on-line consuming behavior patterns for travel. The nonlinear fuzzy network model were adopted to test and verify the sample data. The method of convenience sampling was employed and the questionnaires were distributed through e-mail sending, or were brought back by selected consumers, or were filled in on-line by access to the designated website. A total of 550 questionnaires were returned, giving a response rate of 35.6%. It concluded from the factor loading that among the three independent variables in this study, product marketing attracts customers most in respect to the “Marketing Mix”. The possibility of misunderstanding information is higher in respect to the “Perceived Risk” of information from customers. The close relationship of the family works more effectively for decision making in respect to the “Subjective Norms”. The three latent independent variables of “Marketing Mix”, “Perceived Risk” and “Subjective Norms” are the three key factors that directly or indirectly influence the “Attitude” and the “Behavioral Intention” in this study.

In recent years, people in Taiwan have valued leisure and entertainment and it is more and more popular to go abroad. The use of the Internet is a quick and convenient way to get information concerning travel products. The special feature of Internet media is that it can be combined with words and sound, for better communication. In other words, the development and application of the Internet, on one hand, is not only a Marketing Mix but also the best way to close customers for travel agents, and, on the other hand, is also a way to help customers obtain information and give feedback. This is a concrete practice of Relationship Marketing. The features of small scale, unsound financial structure and lack of belief in sustainable development exist in the tourism industry in Taiwan. Especially when a travel agent sells short-term products, unqualified products are often offered to customers through a low-price strategy. However, since consumer consciousness has been rising in recent years, consumers pay more attention to choices and service quality provided by travel agents, which forces travel agents to strengthen these choices. In respect to Relationship Quality, how link customer’s expectation and the reality of travel products or service is not only an issue for travel agents but also the present trend. Therefore, constructing an on-line travel website and enriching the content of the website have become one of the important methods to contact consumers and to increase consumption. Nevertheless, the content on the website is not the only factor that influences on-line consumption. Since travel products are intangible products, consumers often face a high perceived risk resulted from asymmetric information. Although the application of the Internet provides consumers with a convenient purchase channel, are there other essential factors that influence consumer behavior? This is one of the issues of this study. According to the previous studies concerning the influence of consumption intention on Internet or behavior, most of them were conducted by the following respects: (1) to probe the tendency or attitude which influences consumer behavior by different theories. For example, the Technology Acceptance Model was employed to discuss the influence of the construction of travel website system on consumption intention (Moon & Kim, 2001). The other study adopted the Theory of Planned Behavior (TPB) and the Decomposed Theory of Planned Behavior to probe the Internet purchase intention and explained the understanding of use of information technology more completely (Ajzen, 1991 and Taylor and Todd, 1995a); (2) to target various industries, most of which are service industries, they employed theories to explain purchase intention and behavior models (Ajzen and Driver, 1992, Henderson et al., 1998 and Liao et al., 1999); (3) to discuss the content planning on the website, the construction of the system, or the influence of e-Commerce on travel agents. For example, Lai and Yang (1998) proposed the Customized Marketing System based on the Intelligent Agent, which tried to solve problems that customers faced when browsing through global information websites. Bloch and Segev (1997) explained the influence of e-Commerce on travel agents from a point of view of the supply chain; and (4) to discuss the key factors that influence consumer’s decision making for purchase. For example, the EKB Mode and the Howard–Sheth Mode (Engel et al., 1995 and Evans and Berman, 1994) were to explain and predict the reasons and the results of consumer behavior. In other words, those previous studies focused on three issues: (1) To explain and predict consumer behavior by different behavior theories; (2) To emphasize the influences of different industries on consumer behavior and offer explanations of difference; and (3) The construction of hardware and software, such as the establishment of a website and the positioning of characteristics, was the core of the studies. In the past there were many discussions concerning consumer behavior for travel, however, there are still some chances: (1) among the studies of real consumer behavior for on-line travel products, most of them discussed part of antecedent variables (Ducoffe, 1996 and Leblance, 1992) or employed the EKB Mode. For example, Rogers (1983) used innovation-diffusion consumer behavior models for explanation. There were few studies integrating or modifying the test of the model fit derived from various theories; (2) the previous studies particularly focused on the investigation of consumer behavioral intention (Ajzen and Fishbein, 1980 and Hou and Lin, 1997), meaning that few studies paid attention to the difference of real purchase or consumer behavior; and (3) in the past, the method mostly employed in relevant issues was the multivariate statistical analysis. Few discussions about the nonlinear neural network model were made. In regard to the factors that influence real consumer’s purchase, some are directly observable factors, such as Marketing Mix factors, product features and population statistics variables. The others are indirectly observable factors, such as psychological factors, social factors, and cultural factors (Engel et al., 1995 and Lai, 2000). In the previous studies, the Theory of Planned Behavior, the Decomposed Theory of Planned Behavior and the Technology Acceptance Model gave good explanations on influence on consumer behavior tendency (Ajzen, 1985, Davis et al., 1989 and Moon and Kim, 2001). For discussing on-line consumer behavior, this study tried to combine the Decomposed Theory of Planned Behavior and the Technology Acceptance Model to established a complete study mode, which is to discuss the influences on on-line consumer behavioral intention for travel and the real consumer behavior and to test and verify the explanation degree of this mode on on-line consumer behavioral intention for travel and the real consumer behavior for common consumers. In conclusion, the purposes of this study are stated as follows: (1) To Combine the views from the Decomposed Theory of Planned Behavior and the Technology Acceptance Model and propose a behavior model which influences on-line consumer behavior for travel and real consumer behavior. (2) To analyze and test the data by using the multivariate statistical analysis and the neural network model for proving the degree of this model.

Since tourism became popular in recent years and awareness of individualism and consumer rights are heightened, respecting customer’s requirements on service quality has become the main criterion for various industries. As a result, identifying factors that influence tourist behaviors under intensive competition in the tourism market is an important issue. This study is to provide a modified integrated model by combining views from the Decomposed Theory of Planned Theory and the Technology Acceptance Model and to perform an empirical analysis by the nonlinear fuzzy network model. The results are as follows: (i) The influence of the “Perceived risk” and the “Subjective norms” on the attitude or the behavioral intention is significant. The test result supports the importance of these two latent variables during the process of decision making among numerous variables that consumers consider their behaviors. (ii) The behavior model of consumption decision is influenced by three respects. The first factor is internal and external stimulations and internal motives and desires (ex. the Marketing mix, User motive, Perceived ease of use, and Perceived usefulness in this study). The second factor is the assessment process of self-evaluation (ex. the assessment of the Perceived usefulness, Perceived ease of use, and Perceived risk in this study). The third factor is the influence of stresses from opinions of family, peers or other third party (ex. the Subjective norms in this study). The integrated model has exactly covered factors of these three respects. (iii) The integrated model in this study overall supports the mediating effect of the “Self-efficiency control” on the “Attitude” in the Decomposed Theory of Planned Behavior and also supports the influence of the “Subjective norms” on the “Behavioral intention”. (iv) The test result derived from this study does not support the influence of the “Marketing mix” on the “Attitude”. The possible reason may be that consumers must firstly identify which stimulations among numerous marketing stimulations are actually effective to the consumer behavior. Then the positive attitude and the consequent behavioral intention are generated. In addition, the variance explanation of the “Market mix” on the “User motive” reached 47% only, meaning that this study did not thoroughly consider the factors of the user motive, remaining to later studies to modify. (v) It is found from the coefficients of factor loading (Table 3) that product marketing attracts customers most in respect to the “Marketing mix”. The possibility of misunderstanding information is higher in respect to the “ Perceived Risk” when consumers receive information. The close relationship of the family works more effectively for decision making in respect to the “Subjective norms”.