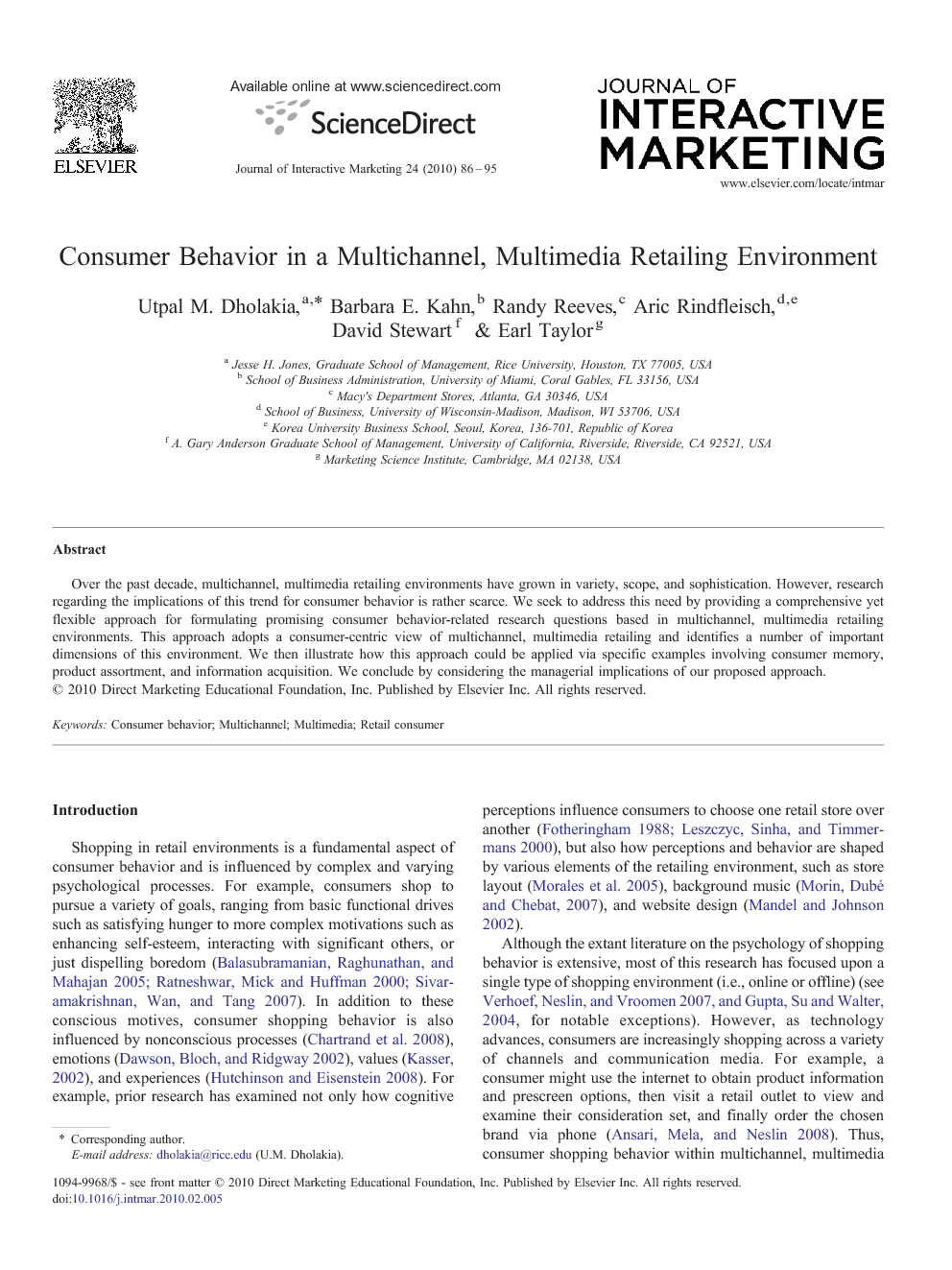 Over the past decade, multichannel, multimedia retailing environments have grown in variety, scope, and sophistication. However, research regarding the implications of this trend for consumer behavior is rather scarce. We seek to address this need by providing a comprehensive yet flexible approach for formulating promising consumer behavior-related research questions based in multichannel, multimedia retailing environments. This approach adopts a consumer-centric view of multichannel, multimedia retailing and identifies a number of important dimensions of this environment. We then illustrate how this approach could be applied via specific examples involving consumer memory, product assortment, and information acquisition. We conclude by considering the managerial implications of our proposed approach.

Shopping in retail environments is a fundamental aspect of consumer behavior and is influenced by complex and varying psychological processes. For example, consumers shop to pursue a variety of goals, ranging from basic functional drives such as satisfying hunger to more complex motivations such as enhancing self-esteem, interacting with significant others, or just dispelling boredom (Balasubramanian et al., 2005, Ratneshwar et al., 2000 and Sivaramakrishnan et al., 2007). In addition to these conscious motives, consumer shopping behavior is also influenced by nonconscious processes (Chartrand et al. 2008), emotions (Dawson, Bloch, and Ridgway 2002), values (Kasser, 2002), and experiences (Hutchinson and Eisenstein 2008). For example, prior research has examined not only how cognitive perceptions influence consumers to choose one retail store over another (Fotheringham, 1988 and Leszczyc et al., 2000), but also how perceptions and behavior are shaped by various elements of the retailing environment, such as store layout (Morales et al. 2005), background music (Morin, Dubé and Chebat, 2007), and website design (Mandel and Johnson 2002). Although the extant literature on the psychology of shopping behavior is extensive, most of this research has focused upon a single type of shopping environment (i.e., online or offline) (see Verhoef et al., 2007 and Gupta et al., 2004, for notable exceptions). However, as technology advances, consumers are increasingly shopping across a variety of channels and communication media. For example, a consumer might use the internet to obtain product information and prescreen options, then visit a retail outlet to view and examine their consideration set, and finally order the chosen brand via phone (Ansari, Mela, and Neslin 2008). Thus, consumer shopping behavior within multichannel, multimedia environments is an important yet under-researched domain.1 It is important to understand how consumers utilize the multiple media and channels available to them, manage their complementarities and conflicts, and come to rely on particular media and channels (Kumar and Venkatesan, 2005, Neslin et al., 2006 and Rangaswamy and Van Bruggen, 2005). We believe there are at least two key reasons for this relative lack of research on consumer shopping behavior in a multichannel environment. First, multichannel shopping is a fairly recent development, for example, very few leading retailers like Walmart and Target paid serious attention to their websites before the turn of the century. Thus, consumers have only recently begun to fully experience the wide and rich selection of retail shopping environments, which allows them to choose between multiple media and channels within a particular retailer, or among various brick-and-mortar and online retailers. Consequently, multichannel shopping is a recent paradigm shift and has just begun to capture the attention of consumer researchers (e.g., Konuş, Verhoef, and Neslin 2008). Second, the consumer research discipline places considerable emphasis upon the development of nomothetic theories that are applicable across a wide swath of consumer phenomena (Houston and Ozanne 1988). For many consumer researchers, a particular medium or channel is only interesting to the extent that it can offer insights that are generalizeable across a variety of settings. This belief system may lead some consumer researchers to infer that multichannel shopping is merely a contextual issue with little opportunity for contributing to the broader corpus of consumer behavior scholarship. While we understand this concern, we suggest that the recent profusion of multiple retail channels offers significant opportunities to both develop basic disciplinary knowledge and generate important managerial implications. As recently noted by Deighton (2007, p. 3), “Something needs to be said in defense of concreteness.” Accordingly, our goals are to raise consciousness about the multichannel retailing environment among consumer researchers and provide a comprehensive and flexible approach for formulating consumer behavior research questions attuned to this environment. Our suggested approach adopts a consumer-centric view of media and channels, identifies relevant channel- and consumer-specific dimensions, and proposes variables useful in studying consumer behavior in a multichannel environment. We employ a process-oriented perspective that demarcates what consumers bring to a multichannel environment, what they encounter in this environment, and what they do during the course of confronting and using these channels. Our proposed approach also explicitly considers the marketer's role in influencing consumers' use of multiple channels by recognizing the marketer as an intermediary between the channel and the consumer. Finally, we provide a bird's eye view of the vast scope and diversity of research issues involving consumer behavior in a multichannel environment, and offer a conceptual tool to help consumer behavior researchers formulate specific research questions about multichannel phenomena. Our next section provides a brief review of existing consumer behavior research about multichannel environments. We then describe our proposed multidimensional approach for studying consumer behavior in a multichannel setting, followed by specific examples of how this approach can be used to generate interesting research questions. We conclude with a set of theoretical and managerial implications.

As these examples illustrate, our approach of delineating channel, consumer, and marketer dimensions in multichannel retailing environments offers a flexible and broad-based palette for investigating important consumer behavior issues. Although our approach is conceptual in nature, the research questions we developed are amenable to empirical investigation via a range of traditional methodologies such as laboratory and field experiments, surveys, and ethnography, as well as relatively newer methods such as netnography (Kozinets 2002) and simulated shopping episodes in virtual environments (Burke 2002). In this concluding portion of the paper, we highlight these insights, identify the limitations of our approach, and offer directions for researchers interested in enriching and extending our work.