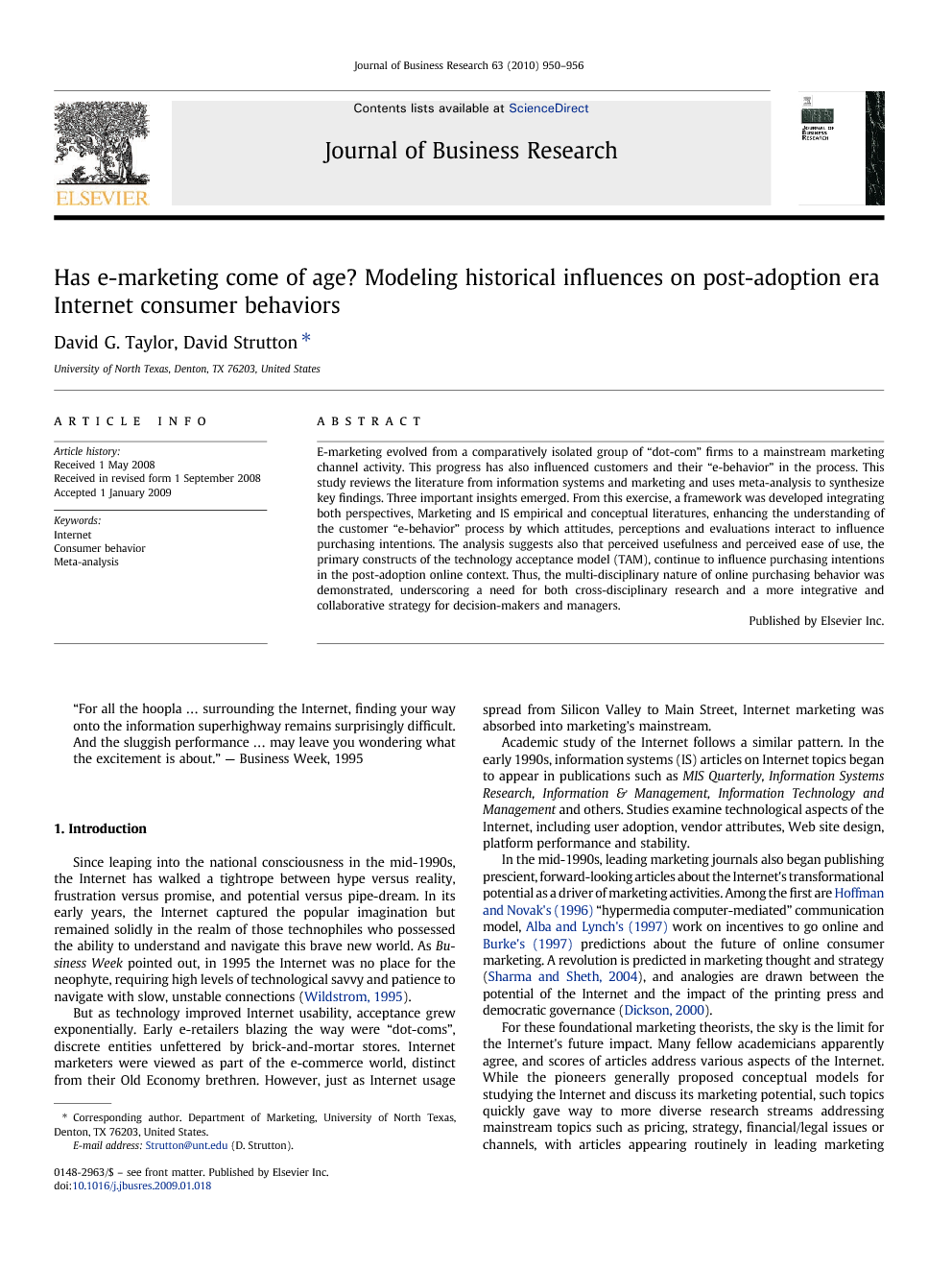 E-marketing evolved from a comparatively isolated group of “dot-com” firms to a mainstream marketing channel activity. This progress has also influenced customers and their “e-behavior” in the process. This study reviews the literature from information systems and marketing and uses meta-analysis to synthesize key findings. Three important insights emerged. From this exercise, a framework was developed integrating both perspectives, Marketing and IS empirical and conceptual literatures, enhancing the understanding of the customer “e-behavior” process by which attitudes, perceptions and evaluations interact to influence purchasing intentions. The analysis suggests also that perceived usefulness and perceived ease of use, the primary constructs of the technology acceptance model (TAM), continue to influence purchasing intentions in the post-adoption online context. Thus, the multi-disciplinary nature of online purchasing behavior was demonstrated, underscoring a need for both cross-disciplinary research and a more integrative and collaborative strategy for decision-makers and managers.

Since leaping into the national consciousness in the mid-1990s, the Internet has walked a tightrope between hype versus reality, frustration versus promise, and potential versus pipe-dream. In its early years, the Internet captured the popular imagination but remained solidly in the realm of those technophiles who possessed the ability to understand and navigate this brave new world. As Business Week pointed out, in 1995 the Internet was no place for the neophyte, requiring high levels of technological savvy and patience to navigate with slow, unstable connections (Wildstrom, 1995). But as technology improved Internet usability, acceptance grew exponentially. Early e-retailers blazing the way were “dot-coms”, discrete entities unfettered by brick-and-mortar stores. Internet marketers were viewed as part of the e-commerce world, distinct from their Old Economy brethren. However, just as Internet usage spread from Silicon Valley to Main Street, Internet marketing was absorbed into marketing's mainstream. Academic study of the Internet follows a similar pattern. In the early 1990s, information systems (IS) articles on Internet topics began to appear in publications such as MIS Quarterly, Information Systems Research, Information & Management, Information Technology and Management and others. Studies examine technological aspects of the Internet, including user adoption, vendor attributes, Web site design, platform performance and stability. In the mid-1990s, leading marketing journals also began publishing prescient, forward-looking articles about the Internet's transformational potential as a driver of marketing activities. Among the first are Hoffman and Novak's (1996) “hypermedia computer-mediated” communication model, Alba and Lynch's (1997) work on incentives to go online and Burke's (1997) predictions about the future of online consumer marketing. A revolution is predicted in marketing thought and strategy (Sharma and Sheth, 2004), and analogies are drawn between the potential of the Internet and the impact of the printing press and democratic governance (Dickson, 2000). For these foundational marketing theorists, the sky is the limit for the Internet's future impact. Many fellow academicians apparently agree, and scores of articles address various aspects of the Internet. While the pioneers generally proposed conceptual models for studying the Internet and discuss its marketing potential, such topics quickly gave way to more diverse research streams addressing mainstream topics such as pricing, strategy, financial/legal issues or channels, with articles appearing routinely in leading marketing journals. Several journals dedicated exclusively to e-commerce and Internet marketing emerged, including The Journal of Interactive Marketing, International Journal of Electronic Commerce, Electronic Commerce Research, and the Journal of Electronic Commerce Research. The IS literature concurrently conducted research on issues of interest to marketers, such as purchasing behavior, channel preferences or customer satisfaction. All the while, the IS literature represents a parallel stream from which marketers can and do pluck a wealth of information regarding Internet marketing.

As Internet purchasing becomes more widespread and diffused, marketers are faced not only with a changing environment, but also a changing customer profile. No longer are Internet users mostly tech-savvy early-adopters. Instead, Internet users encompass every age group, socioeconomic class and level of technical experience. Furthermore, as Internet marketing (and Internet consumer behaviors) move from higher- to flatter-growth stages, competition for these online consumers is apt to become even more intense. It is important, then, for practitioners to understand more about the processes behind their customers' or prospects' buying behavior and loyalty. This meta-analysis examined the extant literature in two disciplines to provide a comprehensive framework for the study of online consumer behavior in a post-Internet-adoption age. A review of the marketing literature reveals a solid foundation of seminal articles produced during the early years of the Internet's emergence as a force in the retailing landscape, followed by several dozen articles on various aspects of Internet strategy, pricing, buyer behavior, legal/financial issues and channels of distribution. Meanwhile, the IS discipline produced a rich but (for the most part) distinct research stream addressing not just the technical aspects of the Web, but also, at times, the behaviors of consumers using the Internet. A surprising proportion of the IS discipline's literature addressed marketing-related issues. This study attempted to transfer this knowledge to the marketing literature, and hopefully it has done so successfully. Several noteworthy observations emerged when the IS and marketing literature were empirically compared. Marketing academics who are unfamiliar with the IS literature on e-commerce may be surprised by the volume of marketing-related studies in the IS and management literature, but several interesting distinctions were apparent. First, e-commerce research in the IS discipline frequently studies online purchasing intentions as a response variable, while a search of the leading marketing journals found few empirical studies with that dependent variable. While the extant marketing literature is rich with examinations of moderating influences, the e-commerce IS literature features very few moderators in its models, a deficiency future IS researchers may wish to address. Indeed, among the studies in this analysis, only two articles mentioned moderating effects. Anderson and Srinivasan (2003) identify five moderators of satisfaction's influence on loyalty intentions, and Chen and Barnes (2007) study the moderating role of familiarity between trust and purchase intentions. Finally, while the extant marketing literature approaches online consumer behavior from a number of theoretical perspectives (including TAM), the IS literature overwhelmingly utilizes TAM. Nine of the studies were based on the TAM model, with the vast majority not explicitly based upon any explicit theoretical foundation. Thus, while a collaborative IS–marketing research partnership suggests promising directions in future research, the marketing discipline appears to be better positioned to lead the study of the next era in online purchasing.