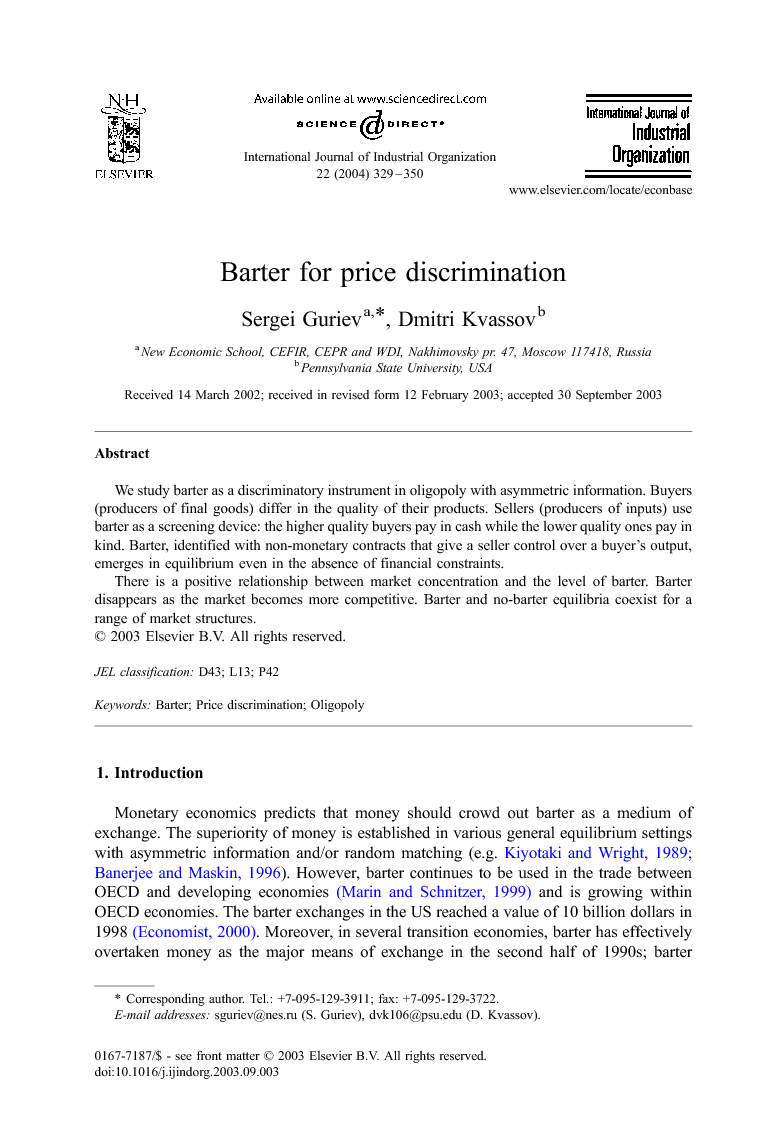 We study barter as a discriminatory instrument in oligopoly with asymmetric information. Buyers (producers of final goods) differ in the quality of their products. Sellers (producers of inputs) use barter as a screening device: the higher quality buyers pay in cash while the lower quality ones pay in kind. Barter, identified with non-monetary contracts that give a seller control over a buyer's output, emerges in equilibrium even in the absence of financial constraints. There is a positive relationship between market concentration and the level of barter. Barter disappears as the market becomes more competitive. Barter and no-barter equilibria coexist for a range of market structures.

Monetary economics predicts that money should crowd out barter as a medium of exchange. The superiority of money is established in various general equilibrium settings with asymmetric information and/or random matching (e.g. Kiyotaki and Wright, 1989 and Banerjee and Maskin, 1996). However, barter continues to be used in the trade between OECD and developing economies (Marin and Schnitzer, 1999) and is growing within OECD economies. The barter exchanges in the US reached a value of 10 billion dollars in 1998 (Economist, 2000). Moreover, in several transition economies, barter has effectively overtaken money as the major means of exchange in the second half of 1990s; barter accounted for 30% to 70% of inter-firm transactions in Russia Aukutzionek, 1998 and Seabright, 2000.1 The International Reciprocal Trade Association, the leading association of barter companies in OECD countries, offers (IRTA, 2001) two common sense explanations of barter: (i) financial constraints: ‘barter is a relatively inexpensive method of finance’, and (ii) spare capacity: ‘to take advantage of barter, a firm must have slow-moving or non-performing assets to exchange, or spare capacity to take on additional sales’. The former argument is quite intuitive, the latter is less so. If a firm sells some of its goods for cash and the rest for barter at different relative prices, then the firm effectively engages in price discrimination. It is not clear, however, why in order to discriminate firm has to use barter rather than cash contracts (e.g. discounts on ‘slowly moving’ goods). The paper presents a model of imperfect competition in which barter contracts indeed enhance firm's ability to price discriminate. The argument is based on asymmetric information: the quality of the good involved in barter payments is better known to its producer. Barter contracts may, therefore, be used as a screening device. The firms that produce output of higher quality prefer to keep it and pay the supplier in cash while the firms with low quality output keep cash and pay in kind. This self-selection, in turn, allows the supplier to benefit from barter. Were there no barter, the volume of trade would be inefficiently low due to imperfect competition; some customers willing to pay a price above the marginal cost would not be served. Barter allows serving the lower quality customers without sacrificing the profits from the high quality ones who prefer to pay in cash. The issue of barter as a price discriminatory device has been addressed in the literature. Caves (1974) and Caves and Marin (1992) show that the price discrimination is responsible for the widespread use of countertrade in trade between OECD and developing countries.2 The model of Caves (1974), however, is applicable only to international trade when customers are exogenously separated and first or third-degree price discrimination is possible. In contrast, this paper develops a model of second-degree price discrimination. Prendergast and Stole, 1998 and Prendergast and Stole, 1999Ellingsen (1998) and Marin and Schnitzer (1999) show, in different settings, that barter emerges as a means of segmenting markets in the presence of asymmetric information or contractual incompleteness, (bilateral) monopoly, and liquidity constraints. The presence of liquidity constraints is crucial to all these models. Ellingsen (1998) shows that barter helps to separate buyers whenever liquidity constraints do not allow firms to discriminate through money. Prendergast and Stole (1998) prove that in their setting, barter emerges only in the presence of liquidity constraints. Marin and Schnitzer (1999) explicitly refer to liquidity constraints as to one of the two major building blocks of their model. Our contribution to the existing literature is two-fold. First, we show that barter may emerge as a means of price discrimination even if there are no liquidity constraints. Moreover, to demonstrate that barter, even if it is extremely inefficient, can emerge in the presence of market power we introduce additional costs of barter: lack of the double coincidence of wants and imperfect divisibility. Second, we analyze partial equilibrium in the case of oligopoly rather than monopoly. The analysis of strategic interaction among sellers does produce new insights. Self-selection of buyers gives rise to the emergence of the ‘cash demand externality’ that one seller's choice imposes on the others. If a firm sells a greater share of its output for cash, cash prices go down, and the most efficient barter customers switch to cash payments. With these customers leaving the barter economy, the average quality of in-kind payments deteriorates and the firm's competitors have more incentives to sell for cash. The cash demand externality leads to multiple equilibria which, in turn, may explain why barter has been so widespread in Russia but not in the other countries. The paper proceeds as follows. Section 2 lays out a model and examines equilibria in the cases of monopoly and oligopoly. Section 3 illustrates the theoretical findings using empirical evidence on barter in Russia. Section 4 concludes.

This paper shows that barter may be used as a discriminatory instrument in sufficiently concentrated markets with assymetric information. Imperfect competition is characterized by underproduction relative to the social optimum. The sellers, therefore, are willing to employ an additional channel of sales (barter) even if this channel is costly. The paper also demonstrates that there exists a relationship between the share of barter in sales and the market concentration. The only equilibrium at high levels of concentration is the barter equilibrium, and the only equilibrium at low levels of concentration is the no-barter equilibrium. Barter and no-barter equilibria coexist in the intermediate range of market concentration. It is important to note that the model provides no clear ranking of the equilibria in terms of social welfare. The equilibrium without barter is characterized by underproduction, many efficient firms close down. In the barter equilibrium, on the other hand, all efficient firms produce but so do inefficient ones; besides, barter involves high transaction costs. The paper demonstrates that competition reduces barter and identifies the trade-offs this reduction involves. A number of simplifying assumptions were made to keep the model tractable. We have assumed linear technology, risk neutrality, exogenous probability of double coincidence of wants, perfect substitution of oligopolists' products, extreme indivisibility of barter, etc. However, the model is robust to relaxing these assumptions: introduction of convex technology, for example, would result in price discrimination both with and without barter. But barter still represents an additional dimension for price discrimination and would, therefore, be used, only the equilibrium contracts become more complicated. This suggests that the insights of the model are not confined to the question of barter in transition or developing economics, but shed some new light on the theories of price discrimination under imperfect competition in general. It is also worth emphasizing that throughout the paper, the term ‘barter’ is used as a shorthand for any non-monetary contract that involves the exchange of property rights. Thus, the developed model may be used to analyse such diverse phenomena as the debt contracting with asymmetric information about the value of collateral, or lease contracts where unobserved actions of one party change the value of the good for the other party.