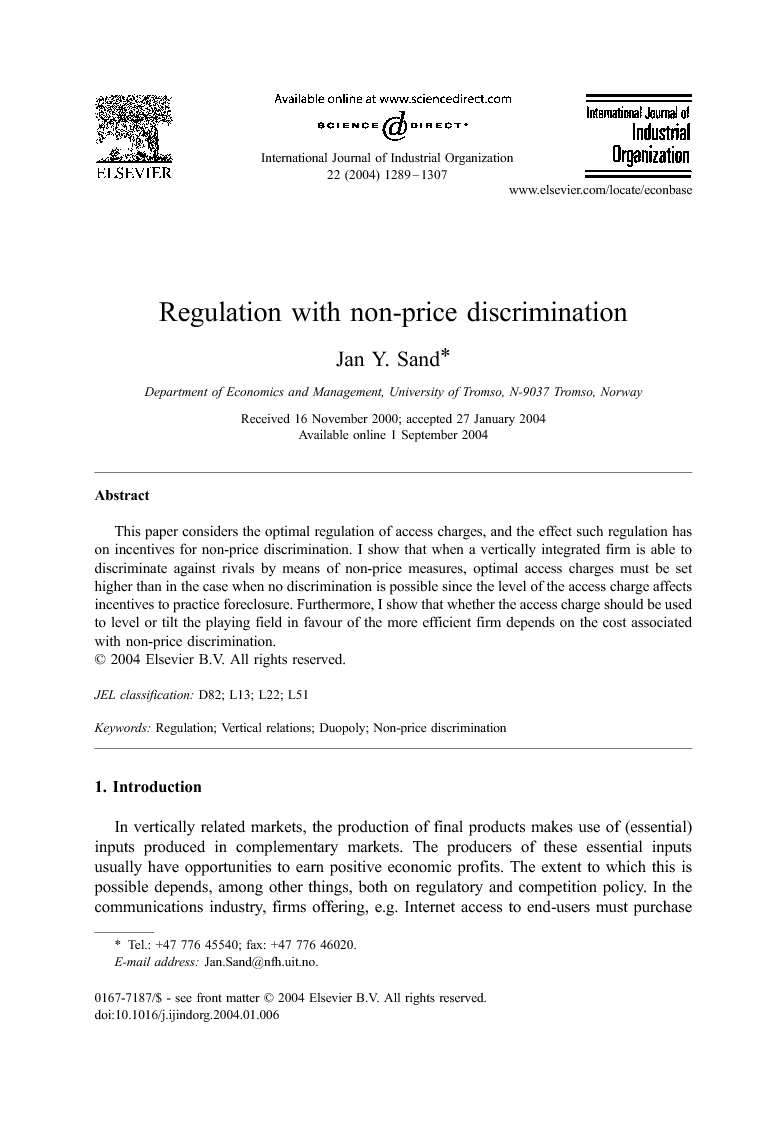 In vertically related markets, the production of final products makes use of (essential) inputs produced in complementary markets. The producers of these essential inputs usually have opportunities to earn positive economic profits. The extent to which this is possible depends, among other things, both on regulatory and competition policy. In the communications industry, firms offering, e.g. Internet access to end-users must purchase access to consumers from local access providers, and the pricing of local access is often subject to regulation.1 The main reason for regulating access charges is to stimulate competition by ensuring that rival firms can obtain access to end-users at reasonable terms. This means setting a low access charge. Allowing vertical integration opens up the possibility for non-price discrimination by the vertically integrated firm, and restricting the integrated firm's earning potential upstream results in an increased incentive to discriminate against its rivals (as is pointed out by, e.g., Sibley and Weisman, 1998). By restricting local access providers' opportunity to serve long-distance markets (i.e., refusing vertical integration), competition authorities may restrict the potential for earning monopoly rent upstream without resorting to the regulation of access charges.2 This is a result well known in the literature on vertical relations.3 The contribution of the present paper to the theory of access charge regulation is to provide an analysis of how the opportunity for non-price discrimination, or damaging, of independent rivals affects the socially optimal access charges. The discrimination may be thought of either as degrading the quality of network inputs, or equivalently, as increasing the cost of purchasing such inputs (in addition to the access price). The increased costs for the rivals could be due to legal expenses incurred when attempting to obtain access on equal terms with the network owner's downstream subsidiary, or more direct costs due to lower quality of access. The access terms offered to rival firms consist of two main elements—the price paid for access and the quality of access. I assume that the access charge is subject to regulation. The issue of access charge regulation has been examined by a number of other authors (e.g., Armstrong et al., 1996, Laffont and Tirole, 1990 and Laffont and Tirole, 1996). In contrast to their work, I focus on the relation between the regulated access charge and the vertically integrated firm's incentive to discriminate against its rival along other dimensions. The network provider has ample opportunities to degrade the quality of access offered to its competitors. The decision of the network provider (the vertically integrated firm) on access quality is not regulated in the model, and may affect competition in the downstream market. The incentive to damage rival firms in a complementary market segment is considered by, e.g., Economides, 1998a and Economides, 1998b, Sibley and Weisman (1998), Mandy (2000), Weisman and Kang (2001), Reiffen and Ward (2002) and Beard et al. (2001). These authors have all identified the level of the access charge as a determinant for non-price discrimination. Contrary to their work, the present paper considers an endogenous access charge and investigates how access charges should be set in this context to achieve the social optimum. The issue of raising rivals' costs is the focus of Economides, 1998a and Economides, 1998b, and his model is extended in the present paper to incorporate the optimal regulation of access charges. The issue analysed in the present paper is also related to optimal price regulation when firms provide unverifiable quality, which is dealt with by, e.g., Laffont and Tirole (1991) and Lewis and Sappington (1991). By allowing firms to charge a price in excess of marginal cost, overall efficiency is reduced through a contraction in output. However, a high profit margin results in improved incentives to provide quality, and the efficiency loss from such a pricing policy is balanced by higher quality. In the present paper, the efficiency loss due to pricing access in excess of marginal cost is balanced against the reduction in the efficiency loss from non-price discrimination. In the present model, following a partial approach, I assume that the downstream industry is deregulated.4 This is the case, e.g., in the telecommunications industry. The regulation of access charges is often easier to implement than regulation of final product prices due to a vast array of different products on the market. It seems to be the case that industry regulators focus more of their attention on the regulation of access terms. Furthermore, I assume that the regulator's toolbox is restricted. Specifically, the regulator is assumed to be able to set a linear access charge and a transfer payment to ensure incentive compatibility and participation by the regulated firm. The regulator cannot, however, devise a penalty scheme to avoid non-price discrimination.5 This is consistent with regulatory practice in, for instance, the communications industry where regulators often are restricted to only instruct the regulated firm to cease such activities (without the use of penalties). The rest of the paper is organised as follows. In Section 2, the basic model is presented and analysed. In Section 3, I investigate the optimal regulation of access charges both when the vertically integrated firm can and cannot use non-price discrimination. In Section 4 are some concluding remarks.

In a number of countries, including the US and EU, regulatory authorities overseeing the communications industry recommend using a cost based policy with respect to the pricing of access to essential facilities. In both the US 1996 Telecommunications Act and the new regulatory package in the EU, access charges are recommended to be non-discriminatory and cost based and may include a reasonable profit to cover non-traffic sensitive costs. An important reason for pursuing such a policy is that this ensures rival firms access to the essential facility at reasonable terms, with the ultimate goal of increasing the degree of competition to the benefit of consumers. If the vertically integrated firm is allowed to determine access charges without regulatory intervention, it will do so to foreclose rival firms, and, consequently, there is some scope for the regulation of access charges. By focusing too heavily on the costs of providing access in the determination of optimal access charges, the regulators may run the risk of ignoring the possibility that the network owner may choose to discriminate against potential rivals by means of non-price behaviour (such as degrading the quality of access offered to rival firms, which then translates into a lower quality of the rival's final product). Naturally, regulators also put emphasis on quality aspects of access provision, but it is inherently more difficult to regulate quality than price. This implies that even if quality is subject to regulation, it is likely that this regulation is less than perfect and that there will be considerable scope for quality discrimination. The analysis above suggests that if regulators cannot write complete contracts with respect to the access terms offered to rivals (i.e., the regulators can only control the price a network owner charges, but not the quality of the access), the optimal access charge should be distorted away from marginal costs of providing access to yield a positive profit margin on access. Even if we assume that the regulator can control all aspects of the access terms offered to rival firms (or, alternatively, can use a more comprehensive set of regulatory instruments), the optimal access charge will in general be different from the marginal cost of providing access in situations where there is imperfect competition downstream (and may yield either an access profit or deficit, depending on how socially costly transfers to the regulated firm are). Previous analysis on access regulation have pointed out that access charges should be set so that production is undertaken as efficient as possible, which involves examining the relative efficiencies of the service providers. The results in the present paper supports such a policy, but it also suggests that the regulation of the access charge should not always be used to award the more efficient downstream firm a larger market share. Some of the results obtained in the paper may be useful in a policy context, and in particular how vertically integrated firms' opportunities for non-price discrimination should influence the determination of access charges. To focus on the main issue the present analysis is undertaken in a stylised model, which assumes specific functional forms and a particular informational asymmetry. A more general model, both with respect to the informational structure and the demand and cost specifications, would be useful to be able to more forcefully challenge the cost-based access charge regulation. Finally, the analysis assumes that the regulator does not utilise all available information when designing the regulation mechanism. In particular, examination of practical regulation of the communications industry has led me to exclude the possibility for regulators to set up monetary penalties to avoid non-price discrimination. In a more complete regulatory mechanism, such a penalty should be considered.