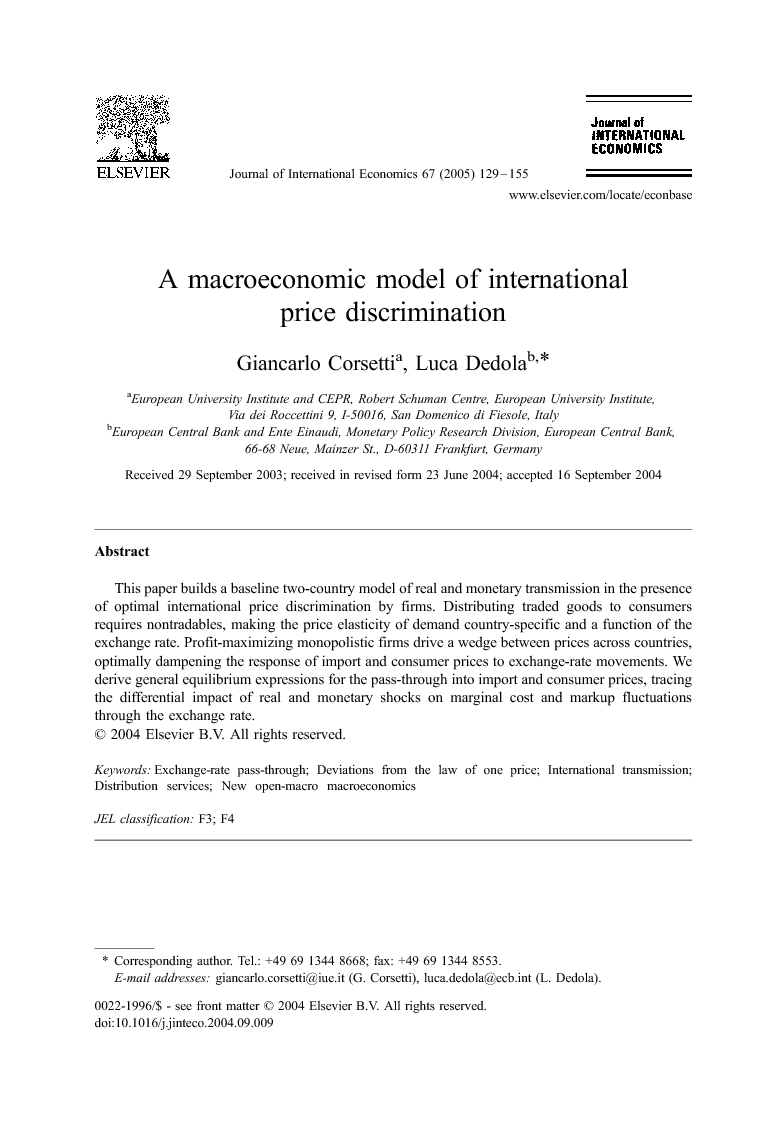 This paper builds a baseline two-country model of real and monetary transmission in the presence of optimal international price discrimination by firms. Distributing traded goods to consumers requires nontradables, making the price elasticity of demand country-specific and a function of the exchange rate. Profit-maximizing monopolistic firms drive a wedge between prices across countries, optimally dampening the response of import and consumer prices to exchange-rate movements. We derive general equilibrium expressions for the pass-through into import and consumer prices, tracing the differential impact of real and monetary shocks on marginal cost and markup fluctuations through the exchange rate.

Many recent contributions stress the importance of placing international price differentials centerstage in open-economy macroeconomic models. In this paper we have shown that, among alternative ways to do so, modelling vertical relationships among firms located in different markets is a promising strategy, as it brings models more closely into line with the reality of large discrepancies in cross-border prices. In our model, due to the presence of downstream retailers, upstream firms with monopoly power may face different demand elasticities in national markets even under symmetric, constant elasticity preferences across countries. Thus, these firms will optimally charge different prices to domestic and foreign dealers—within the limits dictated by the possibility of international arbitrage between wholesale and retail markets. As a consequence, the law of one price fails to hold at both producer and consumer levels, independently of nominal rigidities. Furthermore, as firms optimally adjust markups in the face of demand fluctuations, the response of prices to exchange rate movements is muted at both producer and consumer levels. In general equilibrium, real and monetary shocks will each have a different impact on exchange rate pass-through. Hence, structural interpretations of estimated elasticities call for identifying the sources of exchange rate and price variability. Last, a currency depreciation generally worsens the terms of trade: despite low pass-through the international transmission of monetary shocks can have expenditure-switching effects. Key to our approach is that distributive trade requires local inputs, introducing vertical interactions among firms across national boundaries. It is worth stressing that vertical interactions are not exclusively due to distributive trade. Realistically, local inputs can be employed in some final stage of manufacturing of the final product at local level, combined with traded intermediate goods. Encompassing both distributive trade and manufacturing at local level, the share of the consumer prices that can be attributed to local costs may actually become quite high, potentially reinforcing many of the novel results of our analysis. The model in this paper has been purposely kept simple by means of convenient assumptions. For instance, the elasticity of substitution among types of good is set equal to one, and there is no difference between nontraded goods and distribution services.26 We have also assumed the most basic vertical structure: an upstream monopolist sells its product to a perfectly competitive downstream firm (the retailer). In this case, without distortionary taxation at national level, vertical integration would be completely neutral as regards the equilibrium allocation. An important task for future research is to generalize our setup to richer strategic interactions between upstream and downstream firms (e.g., allowing for non-linear pricing). Most crucially, the evidence suggests that the degree of pass-through is not constant over different time horizons. This evidence calls for building models where optimal markup adjustment interacts with price rigidities, generating dynamics in the degree of local currency price stability.27