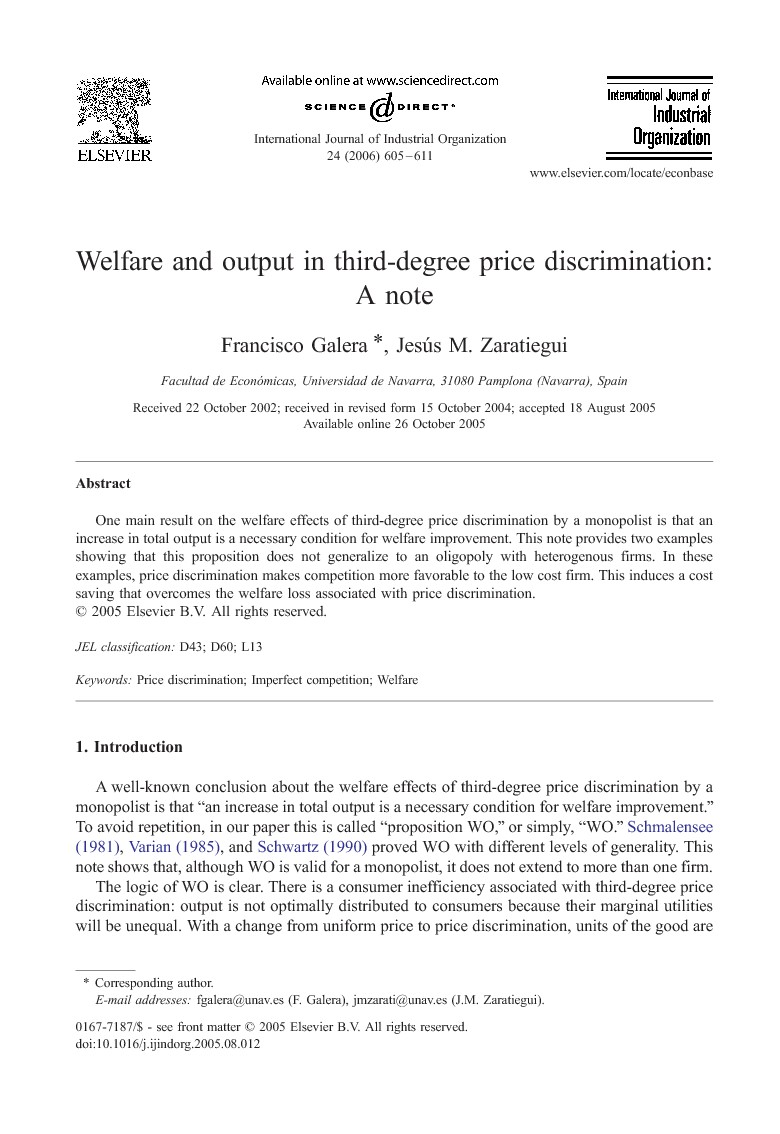 One main result on the welfare effects of third-degree price discrimination by a monopolist is that an increase in total output is a necessary condition for welfare improvement. This note provides two examples showing that this proposition does not generalize to an oligopoly with heterogenous firms. In these examples, price discrimination makes competition more favorable to the low cost firm. This induces a cost saving that overcomes the welfare loss associated with price discrimination.

A well-known conclusion about the welfare effects of third-degree price discrimination by a monopolist is that “an increase in total output is a necessary condition for welfare improvement.” To avoid repetition, in our paper this is called “proposition WO,” or simply, “WO.” Schmalensee (1981), Varian (1985), and Schwartz (1990) proved WO with different levels of generality. This note shows that, although WO is valid for a monopolist, it does not extend to more than one firm. The logic of WO is clear. There is a consumer inefficiency associated with third-degree price discrimination: output is not optimally distributed to consumers because their marginal utilities will be unequal. With a change from uniform price to price discrimination, units of the good are taken away from consumers with a higher valuation of the good and given to consumers with lower willingness to pay. Proposition WO asserts that the only way to overcome this consumer inefficiency is a sufficient increase in total output. This is true when there is only one cost function. However, with heterogeneous firms, cost saving by a better redistribution of output among firms can also overcome the consumer surplus inefficiency. When this is the case, it is no longer true that welfare must fall if output decreases when price discrimination is introduced. Some papers challenge proposition WO. Adachi, 2002 and Adachi, 2005 shows that WO may not hold in the presence of consumption externalities.1Yoshida (2000) refers to proposition WO because his result is in stark contrast with it. In Yoshida's model, an upstream monopolist, by price discriminating, can induce production inefficiencies by increasing the price of its product to the more efficient downstream firms and lowering its price to the less efficient firms. In this way, inefficient firms increase their production and efficient firms reduce theirs. Yoshida shows that with price discrimination total welfare is lower when the aggregate production of the final good is increased: exactly the opposite of WO. But, in Yoshida's model, there is no consumer inefficiency to overcome, anyway. Although the welfare effects of price discrimination under competition have been studied (see Stole, 2003, for a good survey), WO has not been challenged. Holmes (1989, note 2) rightly states, without a formal proof, that WO “holds for this oligopoly analysis,” because in his paper, each firm produces with the same constant average cost. Corts (1998) considers consumer welfare and firm profits, but does not analyze the relationship between a reduction in output and welfare. Armstrong and Vickers (2001), when considering WO in duopoly, assume symmetric and constant marginal costs between firms. Since most models suppose symmetric costs among firms, it is stated sometimes that WO is valid beyond the case of monopoly, with no reference to costs. See, for example, Layson (1994, p. 323). In the next section we present two examples, and we finish the note with some conclusions.

We conclude with one remark. It is known that, for the case of a monopolist, an increase in total output is a necessary condition for third-degree price discrimination to increase social welfare. This proposition presents a test that only requires knowledge of observable magnitudes. But to have policy relevance, the policy-maker should be sure that this proposition is still valid under imperfect competition, because pure monopolies are rare. The extension to oligopoly has not previously been revoked because most papers on price discrimination with imperfect competition deal with symmetric cost firms. Unfortunately, this note shows that a generalization is not possible with heterogeneous firms. With this in mind, the policy-maker needs knowledge of other variables, such as costs; and costs are often hard to measure.