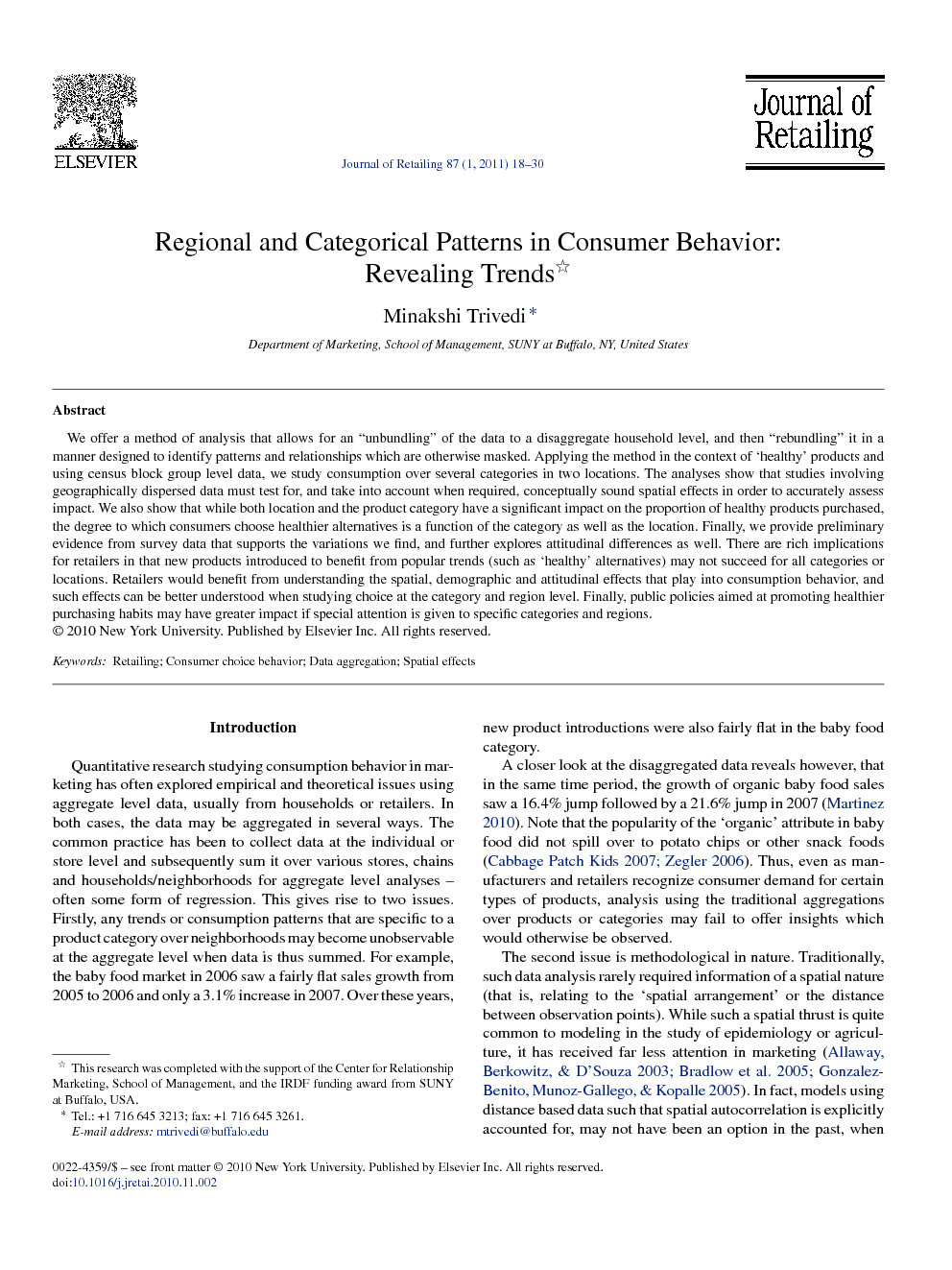 We offer a method of analysis that allows for an “unbundling” of the data to a disaggregate household level, and then “rebundling” it in a manner designed to identify patterns and relationships which are otherwise masked. Applying the method in the context of ‘healthy’ products and using census block group level data, we study consumption over several categories in two locations. The analyses show that studies involving geographically dispersed data must test for, and take into account when required, conceptually sound spatial effects in order to accurately assess impact. We also show that while both location and the product category have a significant impact on the proportion of healthy products purchased, the degree to which consumers choose healthier alternatives is a function of the category as well as the location. Finally, we provide preliminary evidence from survey data that supports the variations we find, and further explores attitudinal differences as well. There are rich implications for retailers in that new products introduced to benefit from popular trends (such as ‘healthy’ alternatives) may not succeed for all categories or locations. Retailers would benefit from understanding the spatial, demographic and attitudinal effects that play into consumption behavior, and such effects can be better understood when studying choice at the category and region level. Finally, public policies aimed at promoting healthier purchasing habits may have greater impact if special attention is given to specific categories and regions.

In conclusion, we offer a method of analysis that allows for a process of using disaggregate household level data, and then aggregating it in a manner designed to identify patterns and relationships which are otherwise masked. The analyses here also show that studies involving geographically dispersed data can apply the appropriate spatial econometric tools to test for their presence (as opposed to using an ad hoc method). This issue of identifying the correct spatial process is an important one, since each spatial specification produces different interpretations and consequently, different policy implications. Our technique of using category specific data at the census block level, confirming the presence of spatial effects accounted for by a lagged spatial model and finally using the appropriate model to estimate parameters, offers one way of achieving a greatly improved fit. By using census block level data instead of zip codes, as has previously been done, we are able to offer analysis at a finer level of distinction. This also enables us to use the census data collected at the block level (Gauri, Pauler, & Trivedi 2009) and offers the benefit of using a much larger data set in order to estimate our model. Finally, our preliminary work with survey data offers support for our results, and more importantly, provides rich insights into the reasons and attitudes for such purchasing patterns. This area of research may benefit from a more in depth study of the level of aggregation – both category and neighborhood level – that would be sufficient to identify patterns of healthy purchasing behavior. Too much disaggregation would produce unnecessary noise while too little may mask patterns. Note that in our case, as displayed in Fig. 1, while we do aggregate the data in a specific way so as to arrive at the required data set, the analysis itself is done only at a single level – the census block group level. If we are, however, to study the issue of modeling simultaneously at several levels, this approach would have to be modified in order to accommodate a multilevel or nested model formulation using techniques such as Hierarchical Linear Modeling (see Jong et al. 2004, among others). We leave this issue for future researchers to explore. Another area rich with potential for future research is a more in depth exploration of the attitudes towards healthy consumption not just across a wider set of consumers, but also at a category specific level. While we explore some of these issues independently in the survey analysis reported here, clearly there is significant scope for research combining data from actual consumption as determined from the scanner data, and survey data. Finally, this study offers plausible explanations for why public policy has seen only marginal success in its effort to impact public choice behavior. If the impact is measured at an aggregate level, any differences in purchasing patterns that are category specific will tend to get masked. Healthy consumption in one category does not imply healthy consumption in all categories, and certain elements of healthy consumption may need greater emphasis in certain neighborhoods. As a result, any effective policy at the very least must be implemented by area and may prove even more effective by concentrating on a few select categories. Such a decomposed method of studying consumption would also allow managers to understand consumer behavior at a finer, more segmented level, thereby allowing a marketing strategy that could be tailored to category and consumer specific segments. Such a strategy would benefit not only manufacturers and retailers in drawing a greater response from the relevant segments, but also public policy makers constantly seeking ways to improve consumer decision making.