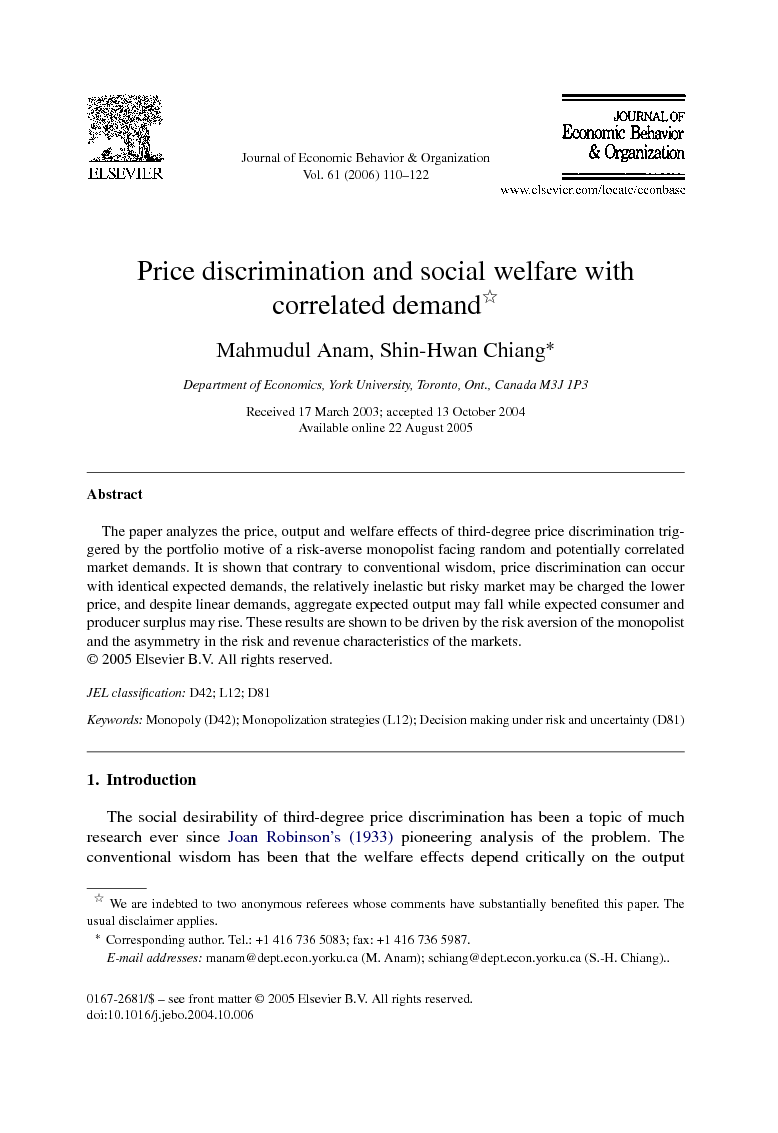 The paper analyzes the price, output and welfare effects of third-degree price discrimination triggered by the portfolio motive of a risk-averse monopolist facing random and potentially correlated market demands. It is shown that contrary to conventional wisdom, price discrimination can occur with identical expected demands, the relatively inelastic but risky market may be charged the lower price, and despite linear demands, aggregate expected output may fall while expected consumer and producer surplus may rise. These results are shown to be driven by the risk aversion of the monopolist and the asymmetry in the risk and revenue characteristics of the markets.

We have reexamined the price and output effects of third-degree price discrimination when the discriminating monopolist faces two divisible, risky and potentially correlated markets. We assume that the monopolist has a concave utility function, commits to fixed prices in each market before the resolution of uncertainty, and maintains these prices even after the resolution of uncertainty. In the context of such a stochastic model, we demonstrate that the less price sensitive market may be charged the lower price and, despite linear demands, aggregate expected output may fall. These results, which run counter to the orthodox intuition, are shown to be driven by the difference between the risk and profit characteristics of the two markets and the willingness of the monopolist to trade an increased level for reduced risk of expected profits. Using numerical simulations with linear demand functions, we also demonstrate that despite a fall in expected aggregate output, expected consumer and producer surplus can increase. For expected consumer surplus to measure consumer welfare consumers must be risk neutral. Our result, therefore, suggests that social welfare gain is possible if consumers are not too risk averse. In order to derive stronger welfare implications of price discrimination, clearly, consumer utility function must be fully specified. This is a fruitful area for further research.