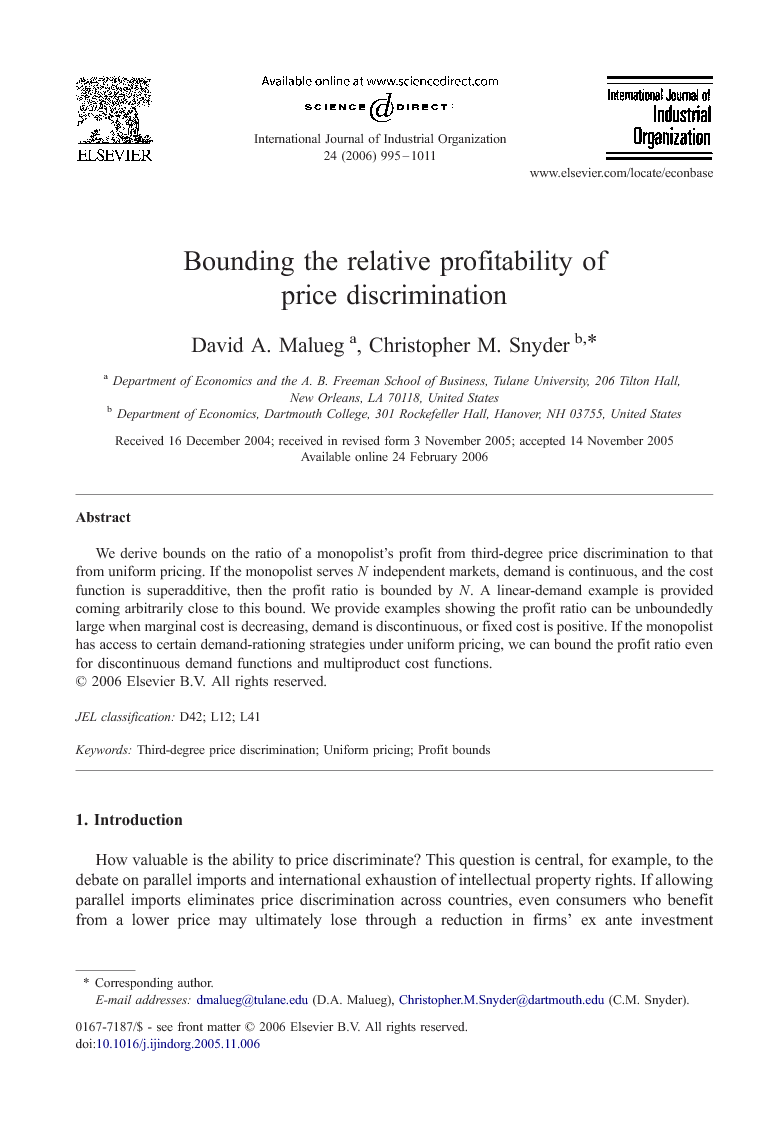 We derive bounds on the ratio of a monopolist's profit from third-degree price discrimination to that from uniform pricing. If the monopolist serves N independent markets, demand is continuous, and the cost function is superadditive, then the profit ratio is bounded by N. A linear-demand example is provided coming arbitrarily close to this bound. We provide examples showing the profit ratio can be unboundedly large when marginal cost is decreasing, demand is discontinuous, or fixed cost is positive. If the monopolist has access to certain demand-rationing strategies under uniform pricing, we can bound the profit ratio even for discontinuous demand functions and multiproduct cost functions.

We have shown that if a monopolist facing N independent markets has a superadditive cost function, then profit under third-degree price discrimination cannot exceed N times the profit under uniform pricing. Indeed, we derived an even tighter bound: N⁎, the minimum number of distinct prices needed for the markets that are served under price discrimination. N⁎ is lower than N to the extent some of the N markets are not served, and to the extent discriminatory prices happen to be the same across several markets. We provided an example with linear demands showing the bound is tight. We provided further examples showing that the assumptions of superadditivity and continuity of demand are generally required for the bound. In Section 3, we showed that the bounds derived in Section 2 hold under a broader set of conditions if the monopolist is assumed to have some ability to ration demand. If the monopolist can ration demand by stocking out, that is, electing to sell only a fraction of the quantity demanded at the chosen uniform price, then the assumption on the continuity of demand is no longer needed to bound the relative profitability of price discrimination. If the monopolist can ration demand by bypassing markets, that is, being able to choose which markets it serves and which not, then the bound on the relative profitability of price discrimination can be extended to the case of a multiproduct cost function. The bound holds under a condition related to diseconomies of scope, slightly weaker than superadditivity of the cost function.