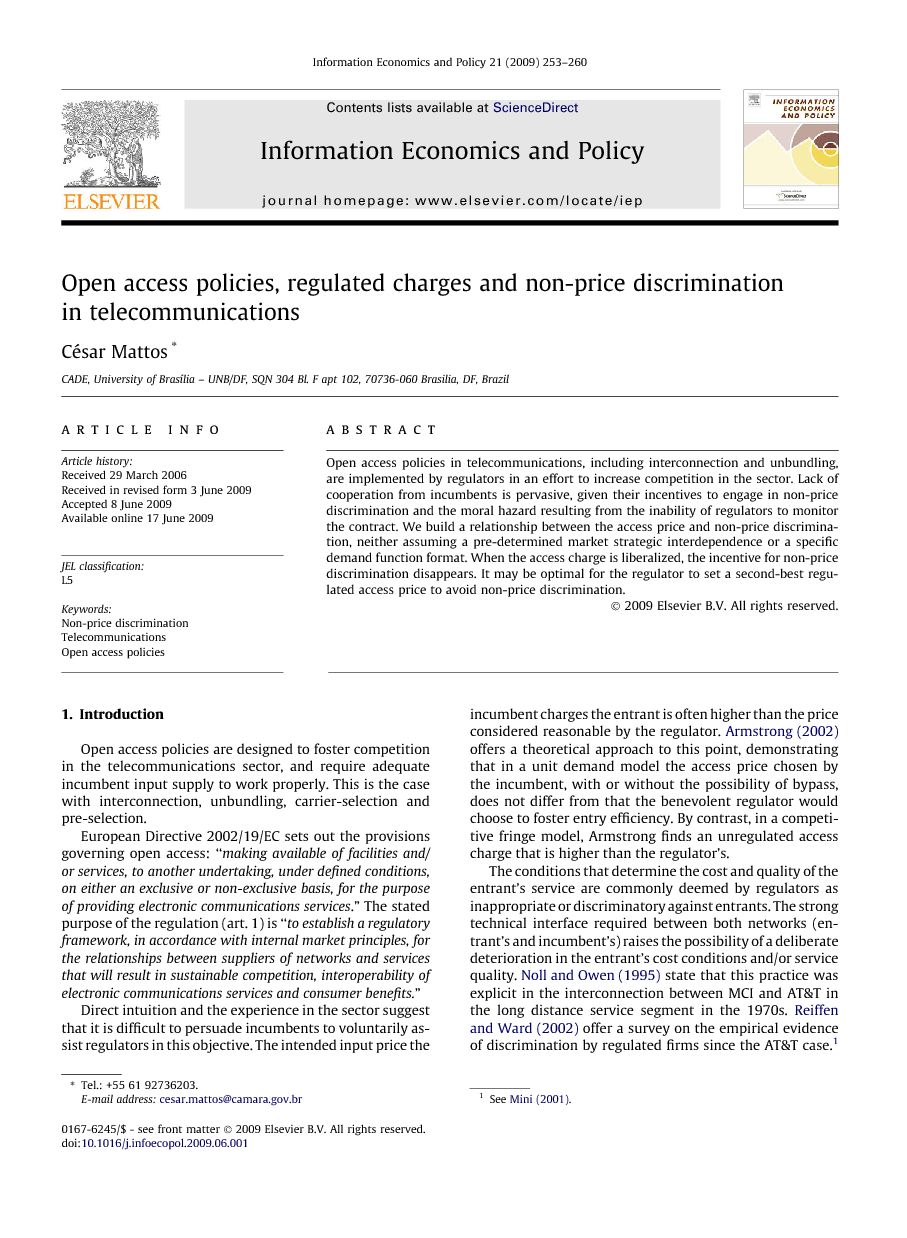 The paper offers some key messages. When a benevolent regulator maximizes its welfare function and accepts the fact that it is unable to monitor the behavior of the ILEC, non-price discrimination is never an SPE equilibrium. Moreover, it is possible that in order to induce the ILEC to play “Does Not Discriminate” the regulator may at times be forced to increase the ILEC’s rents to a certain minimum level. However, depending on the parameters of the problem this may not be required, since it may still be to the ILEC’s advantage to provide open access to the CLEC, even at t = treg, given the profitability of the access business. There are two possibilities when the ILEC’s incentives for non-price discrimination are incompatible with the first-best10 access charge given in (3). First, the regulator may have to give up rents to the ILEC by raising the access charge to a second-best optimum, provided the ILEC is willing to cooperate with the entrant and the regulator in the OAP. This is the finding emerging from the majority of studies cited in the introduction. As long as the regulator allows higher profitability in the access business, through a higher t closer to the profit maximizing access charge, the opportunity cost of non-price discrimination for the ILEC rises to a point where the expected gains in its retail business do not compensate for the losses incurred from reducing the access sought by the CLEC. Second, in anticipating that a non-verifiable strategy of non-price discrimination is inevitable at any value of the access charge, t, the regulator may opt against enforcing the OAP. The benevolent regulator is able to achieve its first best regulated access charge only under certain specific conditions linked to the relative effects of c, and thus p, on the ILEC ‘s retail (X) and access (x) businesses. The puzzle here is why non-price discrimination occurs in the real world. One possibility is that the actual behavior of regulators is not benevolent. Their insistence on TELRIC hypothetical ideally efficient cost rules to price access, as pointed out by Laffont and Tirole (2000), is clearly an explanatory factor. Why the regulator does not accept that its capacity to monitor non-price discrimination is considerably limited is a subject warranting study. In view of the asymmetric information of the public in regard to the regulator, the latter may prefer to give the appearance that it is technically capable of enforcing the OAP, in order to derive the political dividends of such a strategy. Given that non-price discrimination seems to occur in the real world, the regulator does not maximize a (benevolent) welfare function by insisting on the OAP. Therefore, a normative analysis might serve to more accurately reflect its true behavior. Our model departs from the literature by not imposing any specific oligopoly market interdependence or restricting the shape of the demand function. The degree of substitutability between the networks implicit in the first and second derivatives of X and x with respect to p are the key variables for assessing the ILEC’s incentive to discriminate. The benevolent regulator may be obliged in certain cases to raise the access charge from its first-best level (3) to address the moral hazard problem. The ILEC’s rents are increased up to its participation constraint so as to secure the required cooperation with the OAP. It is always the case that if the regulation of access charges is considerably lax or absent altogether (t = tunreg), the incentive for non-price discrimination disappears completely, a finding that is in line with the current literature. Finally, there are some extensions worth mentioning that could enrich this simple model. We could add the CLECs to the game by (i) offering the ILEC an open access contract, even when the regulator prefers to not implement the OAP (16 does not hold) or (ii) enabling a facility-based entry. It is possible that in certain cases the ILEC and the CLEC would be willing to sign a contract for a particular access price the regulator would nonetheless choose to block. This could occur when the regulator deemed the facility-based entry preferable to the OAP based entry insofar as it implies a more robust competitive regime.