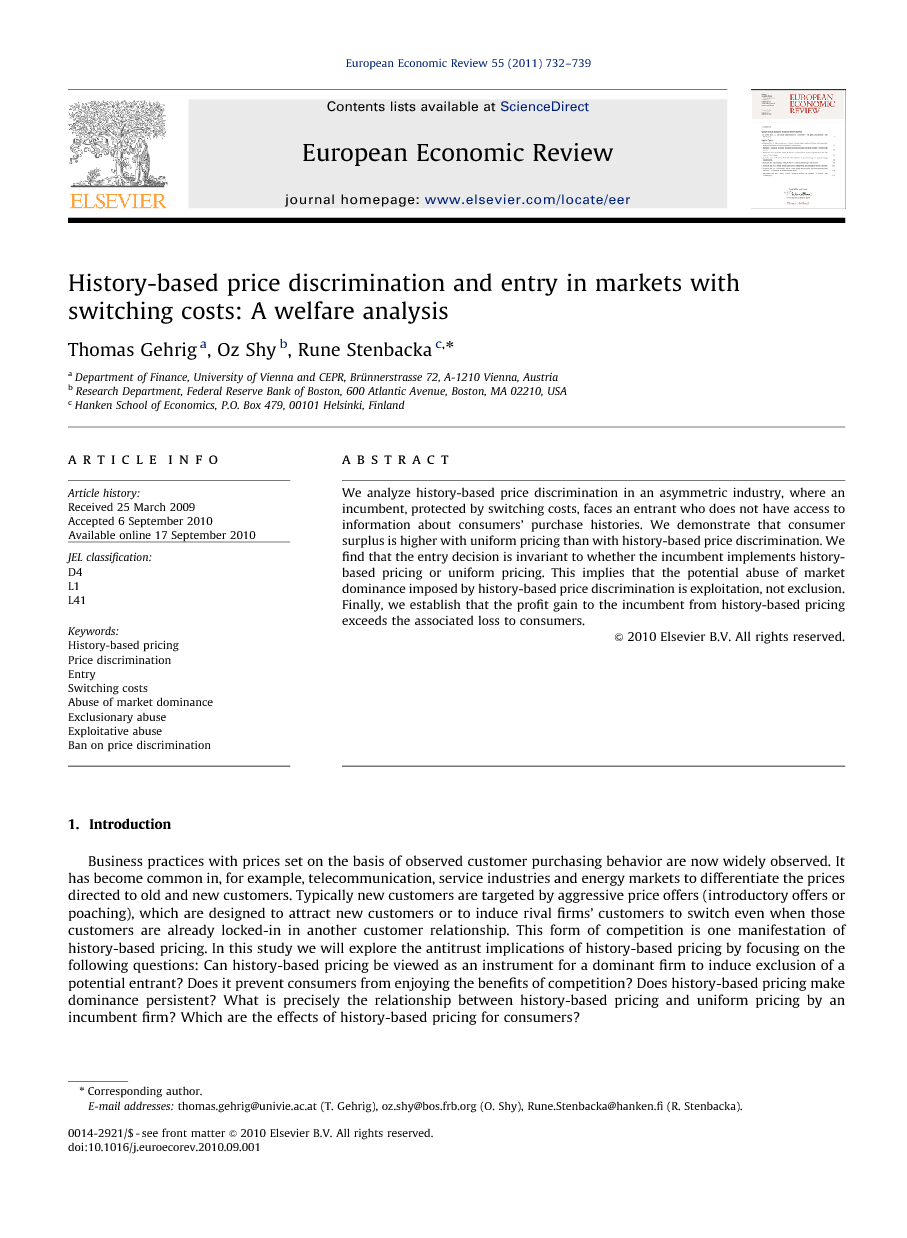 In this study we analyzed the effects of history-based price discrimination on entry and welfare in a model where an incumbent, protected by switching costs, faces an entrant who does not have access to information about consumers’ purchase histories. We initially explored the effects of history-based pricing on market shares and found the persistence of market dominance for the incumbent to be invariant across the regimes with history-based pricing and uniform pricing. Nevertheless, a detailed welfare analysis revealed that consumers would benefit from a policy which bans history-based price discrimination insofar as consumer surplus is higher with uniform pricing than with history-based pricing. According to our analysis, history-based price discrimination was found to neither discourage nor encourage entry. This implies that the potential abuse of market dominance imposed by history-based price discrimination is exploitation, not exclusion. This is remarkable because the standard attempts to ban price discrimination typically focus on exclusion as a manifestation of abuse of market dominance. For example, the European Commission “has issued on 3 December 2008 Guidance on its enforcement priorities in applying Article 82 to abusive exclusionary conduct by dominant undertakings.”7 Our results imply that the potential abuse associated with history-based pricing by a dominant firm is exploitation without exclusion. Finally, we established that the profit gain from history-based pricing to the incumbent exceeds the associated loss to consumers. Of course, we are by no means saying that exclusionary concerns are not important when analyzing the antitrust effects of history-based price discrimination. In this respect we are not implying that enforcement policies of the European Commission are necessarily wrong, but we add an important concern largely overlooked in the current debate. We argue that under simple and theoretically appealing configurations it is well possible that the antitrust concern is exploitation, not exclusion. It should also be emphasized that there are important theoretical studies in support of the Commission's enforcement priorities. For example, Chen (2008) focuses on an asymmetric duopoly, where history-based pricing by a dominant firm poses a anticompetitive threat precisely when it facilitates predation based on the exit of the small rival. Theoretically Chen (2008) analyzes the effects of history-based pricing in an environment which is very different from ours. We focus on a standard Hotelling model, whereas Chen offers an analysis with an arbitrarily long time horizon and with a segmented market where the firms do not compete head-to-head when they apply uniform pricing. Our study has the policy implication that the potential abuse of market dominance imposed by history-based pricing is exploitation, not exclusion. This is highlighted, since in our example the entrant's profit is invariant across the pricing regimes with discriminatory history-based prices and uniform prices. Of course, our example draws heavily on the linear structure of the standard Hotelling framework. That framework has the implication that the optimal pricing scheme of the incumbent with one or two price instruments will always generate the same incumbent market share for any feasible price quote of the entrant. In more general frameworks the invariance results will not generally prevail. In those cases some element of exclusionary concern will be added to the exploitative issue that we focus on. In any case, policy recommendations will depend on the relative strengths of these concerns in the relevant markets. Throughout this study we have analyzed the effects of history-based pricing on entry and welfare within the framework of a very limited horizon. If entry takes place, the strategic interaction between the incumbent and the entrant could continue for many periods. After entry both competitors could then apply history-based pricing. Within such a framework one could investigate the dynamics of dominance and, in particular, characterize the market shares towards which the process would converge and also explore the associated welfare consequences.8 In ongoing work we analyze the welfare effects of history-based price discrimination within the context of an asymmetric duopoly model, where one firm has inherited a dominant market position, but where both firms can apply history-based pricing.9 It remains an interesting challenge for future research to incorporate such an analysis into an entry model with a longer horizon. How will the ability of firms to exploit historical information about their customers for a longer horizon affect pricing and market shares? Would this process converge to perfect price discrimination in the limit, and what would be the consequences of a ban on using such information and other privacy restrictions? Entry barriers can be introduced in several ways. Following the large literature in industrial economics, the traditional approach to entry barriers is to view them as stemming from having sunk and fixed costs of entry. This literature has analyzed in great detail strategic entry deterrence. In Karlinger and Motta (2007) the presence of network externalities generates an entry barrier, and within the context of such a model they demonstrate that price discrimination may induce exclusion which is not the case in the present analysis. In the present analysis, the switching costs constitute the entry barrier. This could be particularly relevant in, for example, service industries such as online shopping, the airlines industry, and banking, where the informational advantages created through an established customer relationship might represent a significant entry barrier.