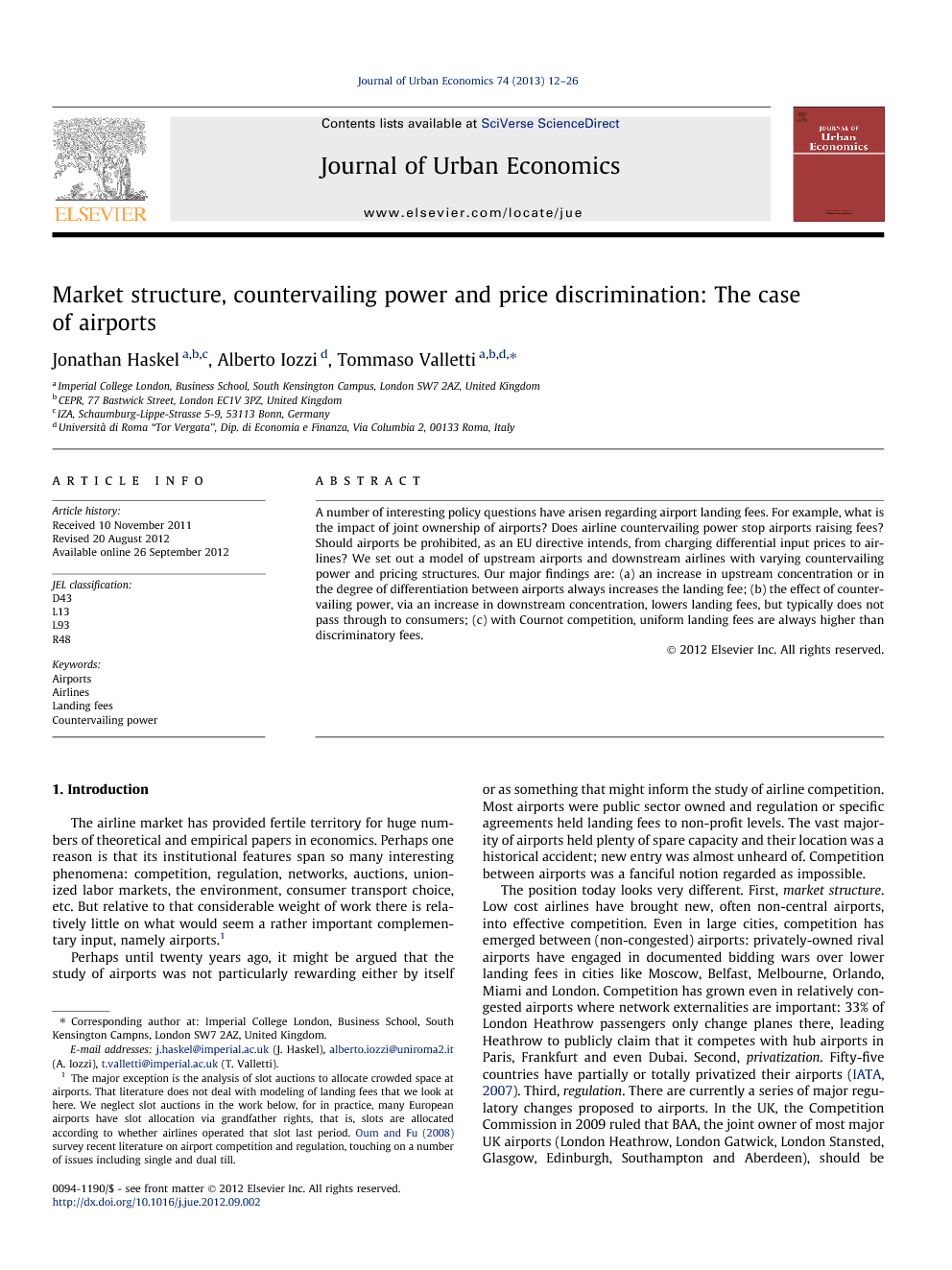 A number of interesting policy questions have arisen regarding airport landing fees. For example, what is the impact of joint ownership of airports? Does airline countervailing power stop airports raising fees? Should airports be prohibited, as an EU directive intends, from charging differential input prices to airlines? We set out a model of upstream airports and downstream airlines with varying countervailing power and pricing structures. Our major findings are: (a) an increase in upstream concentration or in the degree of differentiation between airports always increases the landing fee; (b) the effect of countervailing power, via an increase in downstream concentration, lowers landing fees, but typically does not pass through to consumers; (c) with Cournot competition, uniform landing fees are always higher than discriminatory fees.

In this paper we have set out a model of a vertical industry with up- and downstream competition, and applied it to airports. Our model sheds light on some key policy questions such as: what are the consequences of joint ownership of airports and airlines? Do remote airports need price regulation? Should airports be permitted to price discriminate between airlines? Our results can be summarized as follows. First, should jointly owned airports be broken up? A break up turns out to reduce landing fees ℓ in all cases, as airports compete against each other. But, interestingly, the effects depend in addition on downstream competition, with even lower landing fees if airline routes are more substitutable. Second, what about the countervailing power of airlines? Airports frequently argue that they are stopped from raising ℓ if they are dealing with a dominant airline. Indeed, our model shows that, when a concentrated airline might potentially switch to fly the same route from a nearby airport, the landing fee falls, just as the airports argue. But there are other effects. Airlines succeed in lowering ℓ but keep most of that surplus. So relying on countervailing power is not likely to be welfare-enhancing via reducing prices to consumers. Third, do airlines prefer the new EU rules that appear to make discriminatory pricing harder? Broadly speaking, airlines resist discriminatory pricing more when they are Cournot competitors, so, overall, ℓ is lower in this case compared to uniform landing fees. Thus, if there was Cournot competition at a crowded airport, and the airport moved from a uniform to a discriminatory regime, ℓ would fall. Therefore the model would predict that airports should welcome the proposed EU rule at congested airports, in contrast with airlines.21 The final question we touched on indirectly is how an airport expansion would affect profits of the various parties. There are two broad effects. First, for a given ℓ, an expansion raises airport profits, since quantity rises. But second, an expansion might change the nature of competition and so change ℓ. It is likely that an expansion of a crowded airport changes downstream competition (in our model, from Cournot to Bertrand). The expansion effect always increases airports’ profits under common ownership, though results are more nuanced under separate ownership. As for airlines, they too have more volume, but if competition becomes more intense (in our model, changes from Cournot to Bertrand) their final prices fall as well as their profits. Our approach to the analysis of the vertical structure of oligopolistic up- and downstream industries is amenable to other applications. As mentioned in the Introduction, retailing shows many analogies and similar modeling features. Of course, the model leaves a number of avenues for future work. One is investment incentives in airports. This requires a dynamic investment model and the resulting impact of a change in capacity on competition. Second, there are a number of potentially interesting issues in slot trading. One feature often not realized is that airlines incur substantial sunk costs at airports; thus the grandfather rights to slots may provide appropriate incentives to incur such costs. But this process interacts with competition and so its effects await further analysis. A related issue on slots is that airlines in full airports, with ℓ regulated for example, can switch airports by buying slots from each other: an effect we have not modeled but would require an additional price in the model and bargaining between airlines.