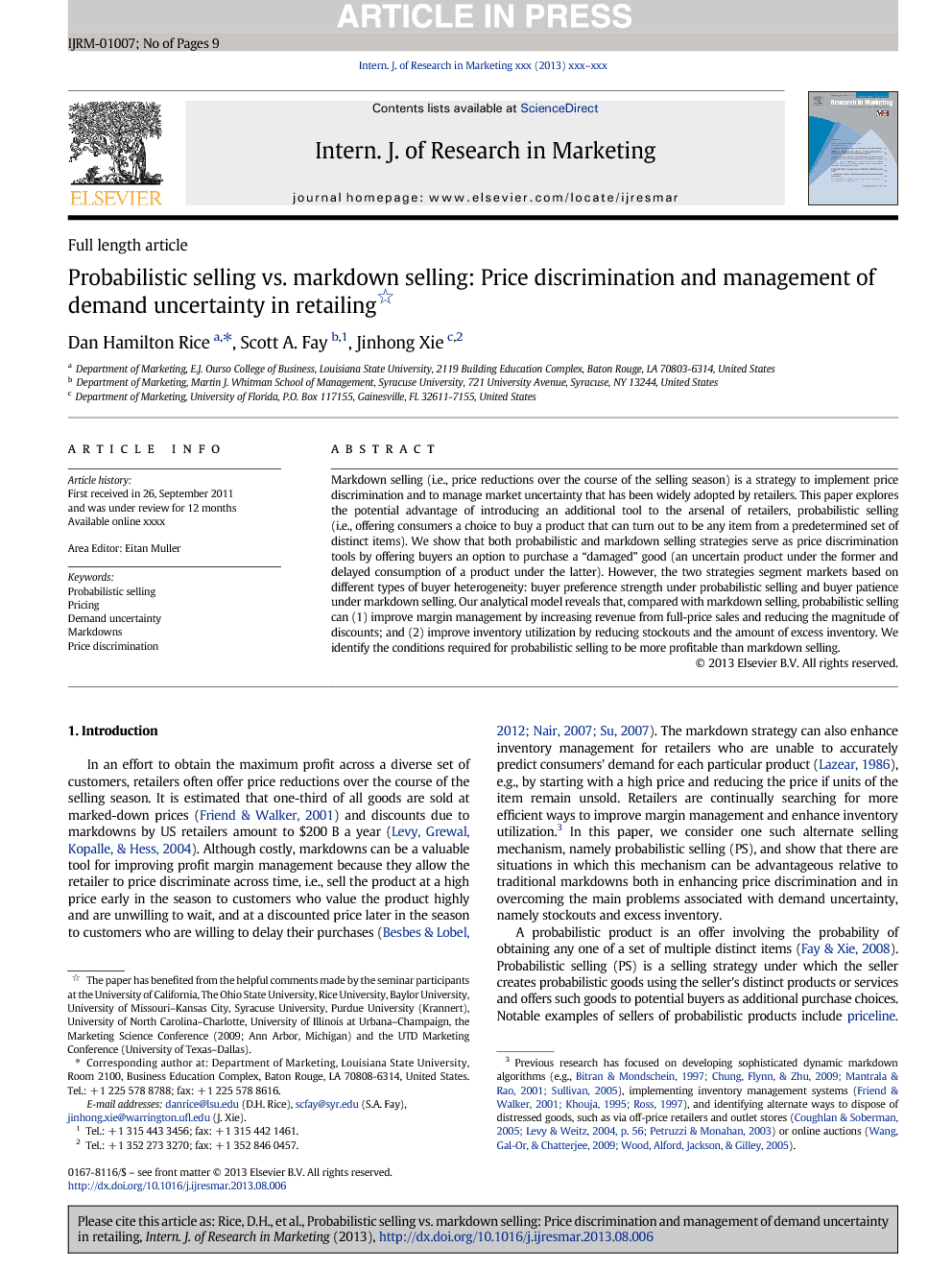 Markdown selling (i.e., price reductions over the course of the selling season) is a strategy to implement price discrimination and to manage market uncertainty that has been widely adopted by retailers. This paper explores the potential advantage of introducing an additional tool to the arsenal of retailers, probabilistic selling (i.e., offering consumers a choice to buy a product that can turn out to be any item from a predetermined set of distinct items). We show that both probabilistic and markdown selling strategies serve as price discrimination tools by offering buyers an option to purchase a “damaged” good (an uncertain product under the former and delayed consumption of a product under the latter). However, the two strategies segment markets based on different types of buyer heterogeneity: buyer preference strength under probabilistic selling and buyer patience under markdown selling. Our analytical model reveals that, compared with markdown selling, probabilistic selling can (1) improve margin management by increasing revenue from full-price sales and reducing the magnitude of discounts; and (2) improve inventory utilization by reducing stockouts and the amount of excess inventory. We identify the conditions required for probabilistic selling to be more profitable than markdown selling.

Markdowns are commonplace in retailing and can result in painful repercussions, such as very low (or even negative) margins and a consumer mentality of delaying purchases in anticipation of a big sale. In this paper, we show that probabilistic selling (PS) can be preferred over a typical markdown (MD) strategy. In particular, we illustrate that introducing probabilistic products can be beneficial because they (1) allow the seller to obtain higher prices from customers with strong preferences for one product over alternatives (because probabilistic products may present less of a cannibalization threat to full-price sales than do traditional time-dependent markdowns); (2) reduce the size of necessary discounts (because consumers may be willing to pay more for a randomly selected product at the beginning of the season than for their preferred product late in the season); and (3) more effectively address the negative consequences of demand uncertainty and limited capacity by helping a firm prevent stockouts and reduce excess inventory. We find that, while both probabilistic products and markdowns can be used to segment consumers, PS is most effective when low-value consumers have weak preferences and high-value consumers have strong preferences. In contrast, markdown pricing relies on specific differences in consumers' willingness to delay purchase until a later date. The markdown pricing strategy is most effective when low-value consumers are relatively patient and high-value consumers are relatively impatient. Because the MD and PS strategies rely on distinctly different mechanisms to segment the market, PS is a valuable additional tool for retailers, especially those who operate in markets where markdowns are ineffective (e.g., non-fashion products or products unaffected by seasonality so that consumer arrival times are not negatively correlated with product valuations or price sensitivity).