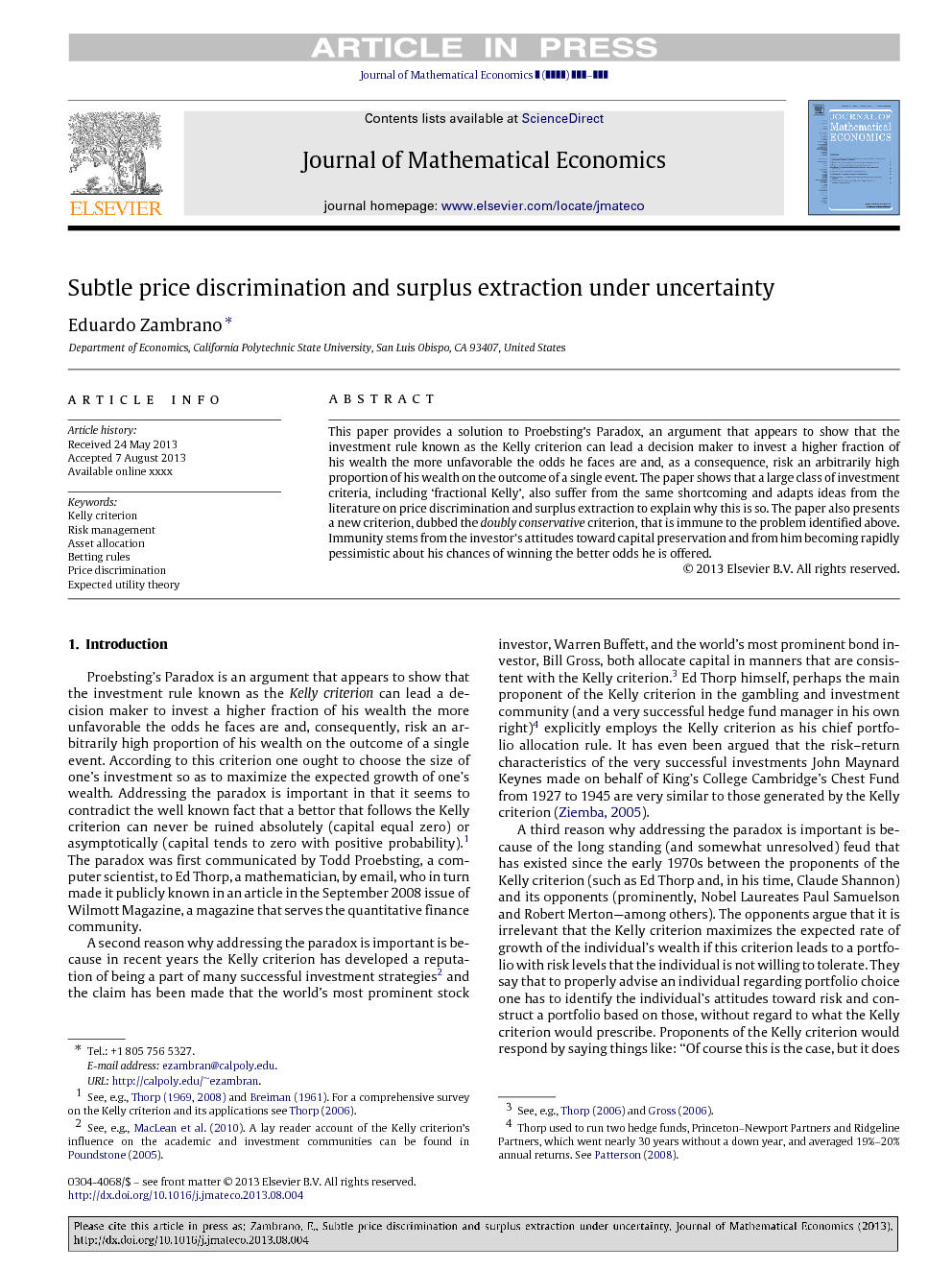 This paper provides a solution to Proebsting’s Paradox, an argument that appears to show that the investment rule known as the Kelly criterion can lead a decision maker to invest a higher fraction of his wealth the more unfavorable the odds he faces are and, as a consequence, risk an arbitrarily high proportion of his wealth on the outcome of a single event. The paper shows that a large class of investment criteria, including ‘fractional Kelly’, also suffer from the same shortcoming and adapts ideas from the literature on price discrimination and surplus extraction to explain why this is so. The paper also presents a new criterion, dubbed the doubly conservative criterion, that is immune to the problem identified above. Immunity stems from the investor’s attitudes toward capital preservation and from him becoming rapidly pessimistic about his chances of winning the better odds he is offered.

Proebsting’s Paradox is an argument that appears to show that the investment rule known as the Kelly criterion can lead a decision maker to invest a higher fraction of his wealth the more unfavorable the odds he faces are and, consequently, risk an arbitrarily high proportion of his wealth on the outcome of a single event. According to this criterion one ought to choose the size of one’s investment so as to maximize the expected growth of one’s wealth. Addressing the paradox is important in that it seems to contradict the well known fact that a bettor that follows the Kelly criterion can never be ruined absolutely (capital equal zero) or asymptotically (capital tends to zero with positive probability). 1 The paradox was first communicated by Todd Proebsting, a computer scientist, to Ed Thorp, a mathematician, by email, who in turn made it publicly known in an article in the September 2008 issue of Wilmott Magazine, a magazine that serves the quantitative finance community. A second reason why addressing the paradox is important is because in recent years the Kelly criterion has developed a reputation of being a part of many successful investment strategies2 and the claim has been made that the world’s most prominent stock investor, Warren Buffett, and the world’s most prominent bond investor, Bill Gross, both allocate capital in manners that are consistent with the Kelly criterion.3 Ed Thorp himself, perhaps the main proponent of the Kelly criterion in the gambling and investment community (and a very successful hedge fund manager in his own right)4 explicitly employs the Kelly criterion as his chief portfolio allocation rule. It has even been argued that the risk–return characteristics of the very successful investments John Maynard Keynes made on behalf of King’s College Cambridge’s Chest Fund from 1927 to 1945 are very similar to those generated by the Kelly criterion (Ziemba, 2005). A third reason why addressing the paradox is important is because of the long standing (and somewhat unresolved) feud that has existed since the early 1970s between the proponents of the Kelly criterion (such as Ed Thorp and, in his time, Claude Shannon) and its opponents (prominently, Nobel Laureates Paul Samuelson and Robert Merton—among others). The opponents argue that it is irrelevant that the Kelly criterion maximizes the expected rate of growth of the individual’s wealth if this criterion leads to a portfolio with risk levels that the individual is not willing to tolerate. They say that to properly advise an individual regarding portfolio choice one has to identify the individual’s attitudes toward risk and construct a portfolio based on those, without regard to what the Kelly criterion would prescribe. Proponents of the Kelly criterion would respond by saying things like: “Of course this is the case, but it does not deny the fact that (the Kelly criterion) has an objective property: it has a better growth rate than that achieved by any other strategy” (Cover, 2008). As a response to arguments of this type Samuelson (1979) wrote a two page paper in 1979 which, in words of one syllable, argued that maximizing the expected growth rate of wealth need not be appropriate. Later on, Samuelson went on to call the Kelly criterion a “complete swindle” (Poundstone, 2005). The debate stalled more or less back then. This paper offers some bad news and some “good news” for the proponents of the Kelly criterion. The bad news is that the problem is worse than what Proebsting and Thorp anticipated in that the following ‘skimming’ result can be proved: one can devise a sequence of structured investments, or bets, that a Kelly bettor would willingly accept that would entice the investor to risk virtually his entire wealth and that will keep the expected growth of his wealth as close to zero as one wished. The paper also shows that the so-called fractional Kelly criterion (a criterion that follows from betting only a constant fraction of what the Kelly criterion would dictate) is also vulnerable in the same way. The “good news” is that the findings of Proebsting and Thorp, and the generalizations discussed above, cannot be used to argue against the use of the Kelly criterion because many other investment criteria, precisely all those that Samuelson and Merton would advocate,5 also suffer from exactly the same shortcomings. Something deeper is generating these vulnerabilities, and the paper discusses what that is: the simple fact that, embedded in most reasonable betting systems one can devise lies the maxim “Good odds are worth paying for”. Once this is in place, a version of the surplus-extracting skimming result described above basically goes through. 6 There are exceptions, however: investors that would very rapidly become pessimistic about their chances of winning the better odds they are offered. The paper shows the existence of a family of investment rules with these characteristics (all ‘distant cousins’ of fractional Kelly). This family is somewhat immune to the skimming result in that there is a limit to how much those bettors will bet no matter how attractive the odds in any sequence of bets presented to them may be. This provides a half open door 7 out of the dismal world Proebsting and Thorp discovered exists for bettors who like betting, and from which they would find hard to escape. On that less pessimistic note, the paper ends. The rest of the paper is devoted to a coherent presentation of the claims made above, together with additional commentary that would aid in the interpretation of what lies beneath Proebsting’s paradox and its variants. The concluding section briefly discusses the implications of the results presented to the issues related to the structuring of financial securities, mutual fund design, and “plain vanilla” betting. For expositional simplicity I frame all decision problems below using the terminology of fixed-odds betting. Bettors will be regarded as male while bookies will be regarded as female.

This paper shows that the implications of the paradox identified by Proebsting and studied by Thorp and Brown run deeper than previously thought in that a wide family of betting rules also suffer from versions of the paradox. There is an underlying logic to the method one uses to generate the ‘paradoxes,’ one that is dependent on the simple fact that any bettor who likes betting (which is to say, for whom at least some degree of betting is instrumental in reaching whatever the bettor’s goals happen to be) is willing to pay money to face sufficiently attractive odds. Once one knows the criteria the bettor uses for betting, this willingness-to-pay can be determined exactly, and the surplus the bettor derives from betting can be extracted from the bettor through a structured bet with the following characteristics: offer attractive odds on the condition that the bettor wagers certain amounts at less attractive odds. If the bet is designed carefully all the bettors studied in this paper (except for the so-called doubly conservative bettor) will, for better or for worse, willingly give a large fraction of their wealth to the bookies. The situation is not unlike that faced by a customer at a store that is offered a steep discount on certain items only after the customer commits to buying a certain number of those items at the “regular” price. Having investigated how general the skimming results shown in this paper are it is refreshing to know that, from a prescriptive point of view, one can develop betting criteria that are conservative both with respect to taking excessive risk and of being excessively optimistic, so that such a doubly conservative bettor will never risk too large a fraction of his wealth on the outcome of a single event, no matter how attractive the structure of odds presented to him. That the array of structured bets like the ones discussed above can be developed and investigated has implications in other areas, like in the design of securities, as the ideas employed in this paper could be used to create assets that would be particularly attractive to certain types of investors. Alternatively, they could be used to create the right incentives for individuals to save a given portion of their wealth in retirement funds. More plainly, they can be used to investigate the extent to which bookies in established betting markets already skim bettors using similar kinds of ideas, and the extent to which the doubly conservative criterion would protect a bettor’s wealth in these real life settings. The scope of applicability of these ideas is even broader than this in the sense that they may be of value for the analysis and structuring of products in any type of market in which uncertainty plays a substantive role.