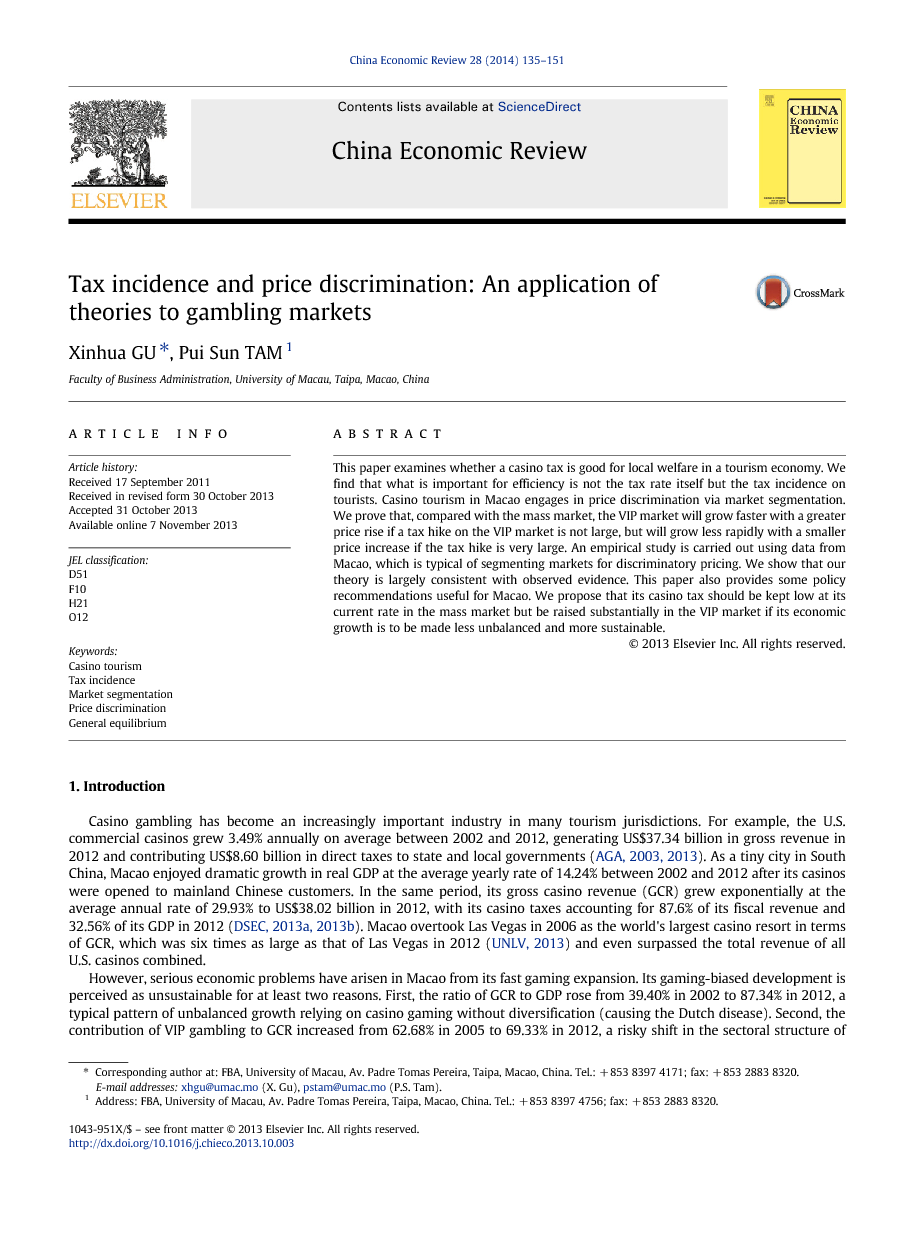 This paper examines whether a casino tax is good for local welfare in a tourism economy. We find that what is important for efficiency is not the tax rate itself but the tax incidence on tourists. Casino tourism in Macao engages in price discrimination via market segmentation. We prove that, compared with the mass market, the VIP market will grow faster with a greater price rise if a tax hike on the VIP market is not large, but will grow less rapidly with a smaller price increase if the tax hike is very large. An empirical study is carried out using data from Macao, which is typical of segmenting markets for discriminatory pricing. We show that our theory is largely consistent with observed evidence. This paper also provides some policy recommendations useful for Macao. We propose that its casino tax should be kept low at its current rate in the mass market but be raised substantially in the VIP market if its economic growth is to be made less unbalanced and more sustainable.

This paper investigates whether a casino tax is good for efficiency in a tourism economy. A partial equilibrium model is adopted to examine whether the optimal tax rate exists to enhance local welfare. This issue hinges on tax incidence and local use of factor inputs. It is found that tax optimization based on tax incidence is possible in both theory and practice for casino resorts with competitive industrial organization, geographic market power, and different sources of factors of production. Outgoing tax incidence on tourists made possible by such market power is of particular importance for local wealth enhancement. The partial equilibrium result is to some extent useful when applied to Macao and Las Vegas for a rough comparison. A general equilibrium model is developed to study the implication of casino taxation for efficiency by allowing for economy-wide feedback effects and resource re-allocation between the casino sector and all other sectors. We find that the economy-wide efficiency of a casino tax does not have much to do with the rate of this tax, but lies with how much of the tax gets passed on to tourists. That implies that general equilibrium analysis is more sensible than its partial counterpart. Moreover, how much of local tax burden is “exported” to visitors depends on the effectiveness of marketing conducted by local casino firms. While marketing brings in more tourists and makes them spend more, this activity can be very costly as observed in Macao. Another general equilibrium model is used to examine the interaction of tax incidence with price discrimination via market segmentation. While the consumer price is predicted to rise as a result of tax incidence in partial equilibrium models, this may not necessarily be the case in a general equilibrium model. Some of our theoretical findings are worth reporting here. If a casino VIP tax hike is below a certain threshold level affected by demand conditions, the VIP market will have a larger rise (than the tax hike) in its sales price and hence grow faster than the mass market. In this case, income inequality will be on the rise since the net wage declines for labor but the net return increases for capital. This case has indeed happened in Macao. If the VIP tax hike is above the threshold level, the VIP market may still enjoy a price increase (smaller than the tax hike) but grow less rapidly than the mass market. In this case, income inequality can be reduced since the net wage rises but the net return drops. Additionally, tax-triggered price changes in the two market segments are also affected by relative factor intensities, various substitution elasticities, and demand/supply elasticities. An empirical study is performed on the basis of limited data from Macao. Attempts are made in this paper to infer significant results from observed evidence by circumventing difficulties in casino pricing issues and limited data availability. We show that empirical evidence is supportive of major findings obtained from our general equilibrium models. The empirical validity of our theories implies the usefulness of their predictions for policy recommendation. We are thus in a position to propose that Macao's casino tax should be kept low at the current level of 39% in its mass market but must be raised substantially in its VIP market. By doing so, Macao can slow down the problematic expansion of VIP gambling while effectively promoting the healthy growth of the mass market. Local wealth will be enhanced by fostering well diversified tourism sectors through strengthened marketing. Economic growth may then become less unbalanced and more sustainable.