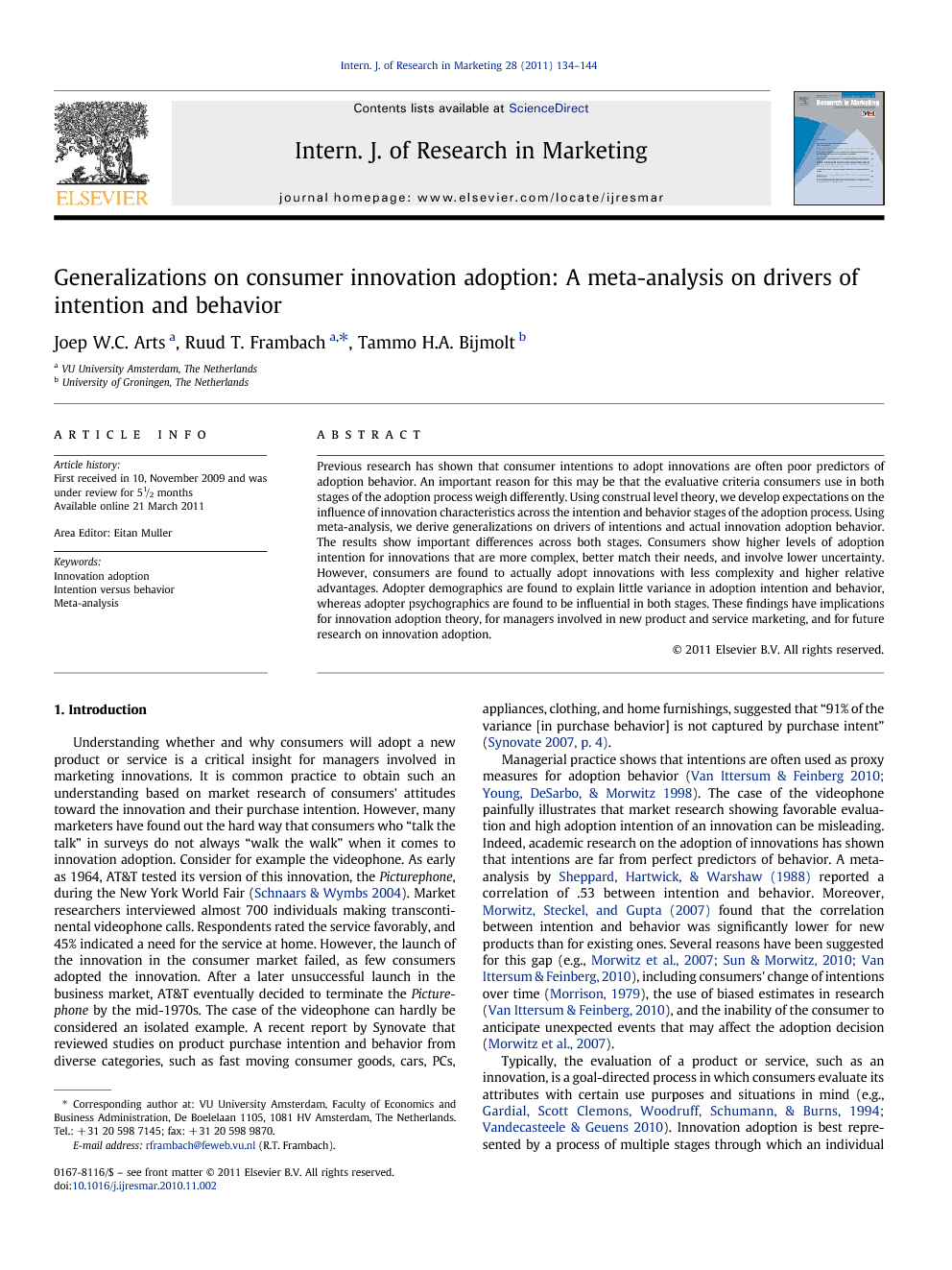 Previous research has shown that consumer intentions to adopt innovations are often poor predictors of adoption behavior. An important reason for this may be that the evaluative criteria consumers use in both stages of the adoption process weigh differently. Using construal level theory, we develop expectations on the influence of innovation characteristics across the intention and behavior stages of the adoption process. Using meta-analysis, we derive generalizations on drivers of intentions and actual innovation adoption behavior. The results show important differences across both stages. Consumers show higher levels of adoption intention for innovations that are more complex, better match their needs, and involve lower uncertainty. However, consumers are found to actually adopt innovations with less complexity and higher relative advantages. Adopter demographics are found to explain little variance in adoption intention and behavior, whereas adopter psychographics are found to be influential in both stages. These findings have implications for innovation adoption theory, for managers involved in new product and service marketing, and for future research on innovation adoption.

The objective of this meta-analysis was to investigate whether and, if so, how antecedents of innovation adoption vary across the intention and behavior stages of the adoption process. The findings of this research provide generalizations on the key drivers of consumer innovation adoption, revealing important differences between the influence and explanatory power of antecedents across the adoption process stages. These findings thus stress the relevance of distinguishing between evaluative criteria that help to explain consumers' purchase intention of an innovation and those that explain actual purchase behavior. As such, they have implications for research on innovation adoption and for managers involved in marketing innovations. Before turning to the implications, we first discuss the surprising and unexpected results of this study. Based on the Construal Level Theory (Trope & Liberman, 2003), we expected the benefits of an innovation to be most influential on a consumer's innovation adoption decision at the intention stage. We do find, as expected, that compatibility has a stronger positive effect on intention than on behavior. Relative advantage, however, has a somewhat stronger positive effect on behavior than on intention. An explanation for this finding could be that relative advantages of an innovation represent experience qualities that can best be assessed when consequences of using the innovation are evaluated, consistent with Means-End Chain Theory (e.g., Gutman, 1982). As these consequences are difficult to determine prior to purchase (Gardial et al., 1994), the effect of relative advantage on intention may be less strong. Similarly, studies in health psychology on the adoption of new healthy behaviors report that individuals attach more advantages to these new behaviors in the behavior stage than in the intention stage (Prochaska et al., 1994). The effects found for trialability and observability on behavior were also unexpected. Both trialability and observability show negative effects at this stage of the innovation adoption process, although their effect sizes are very small. An explanation may be found in research by Karahanna et al. (1999), which suggests that the relevance of trialability vanishes once the innovation is in use. Observability becomes less relevant as well because of personal experience with the innovation. Taken together, the findings lend partial support to the notion that benefits are most influential at the intention stage, especially in terms of the innovation's perceived compatibility. Contrary to expectations, perceptions of relative advantages are more pronounced at the behavior stage, which may be caused by context-specific experiences with the innovation. Perceived complexity was found to more strongly inhibit behavior than intention, as expected. Contrary to expectations, however, we found its effect on intention to be positive. An explanation for this finding may be that prior to adoption, at the intention stage, consumers underestimate the (potentially negative) role of complexity and are overconfident about the usability of the innovation (Wood & Moreau, 2006). Likewise, Thompson, Hamilton, and Rust (2005) showed that consumers value product features (which increase the innovation's complexity) more positively and attach less weight to the innovation's usability before use than after. Taylor and Todd (1995) suggest that complexity may signal higher quality. Rather than a cost, complexity could therefore signal newness and advancement. In this vein, complexity functions as a ‘trigger of interest’ for adoption intention (Berlyne, 1971 and Messinger, 1998), but becomes a barrier for behavior. Perceived uncertainty has a negative effect on both intention and behavior, as expected, although with a stronger effect on intention than on behavior. Consistent with the small effect found at the behavior stage, Demoulin and Zidda (2009) reported that perceived risk does not discriminate between adopters and non-adopters of a new loyalty card among consumers. An explanation for the relatively weak effect of uncertainty at the behavior stage may be that adopters were compared to a group of non-adopters that included consumers in any stage of the adoption process prior to behavior. These consumers were likely to be very heterogeneous in terms of their perceptions of innovation uncertainty, as some of them may not even have been aware of the innovation. Furthermore, the role of different types of uncertainty may also account for the effects found. Because we were not able to distinguish between alternative types of uncertainty (cf. Castaño et al., 2008), the results we found may have been affected by different types of uncertainty having received different attention in previous studies that were included in the meta-analysis. With regard to adopter characteristics, we found limited support for the impact of socio-demographics. Steenkamp and Gielens (2003) showed that the moderating role of market factors, such as the number of brands in a market, has a strong effect on the influence of age and income, resulting in non-significant main effects. Based on the meta-analysis, we conclude that socio-demographics (i.e., age, education, and income) do not have a generalizable systematic impact on adoption intention and adoption behavior. Adopter psychographics, however, including product involvement, innovativeness, and opinion leadership, account for a relatively high percentage of the explained variance of adoption intention and, to a lesser extent, of adoption behavior. Involvement has an especially strong effect on intention to adopt an innovation. Consumers who have greater familiarity with a product category need less cognitive effort to evaluate the innovation, which makes them more likely to form adoption intentions (Gatignon & Robertson, 1985). Although the empirical literature reports inconsistent effects of consumer innovativeness on adoption (Im, Bayus, & Mason, 2003), the meta-analysis suggests a positive influence on both intention and behavior (with a stronger effect on the latter). With respect to opinion leadership, we only found a positive effect on behavior. Research by Goldenberg, Sangman, Lehmann, and Hong (2009) suggests that “social hubs appear to adopt earlier because of their larger number of connections rather than innate innovativeness” (p. 10).