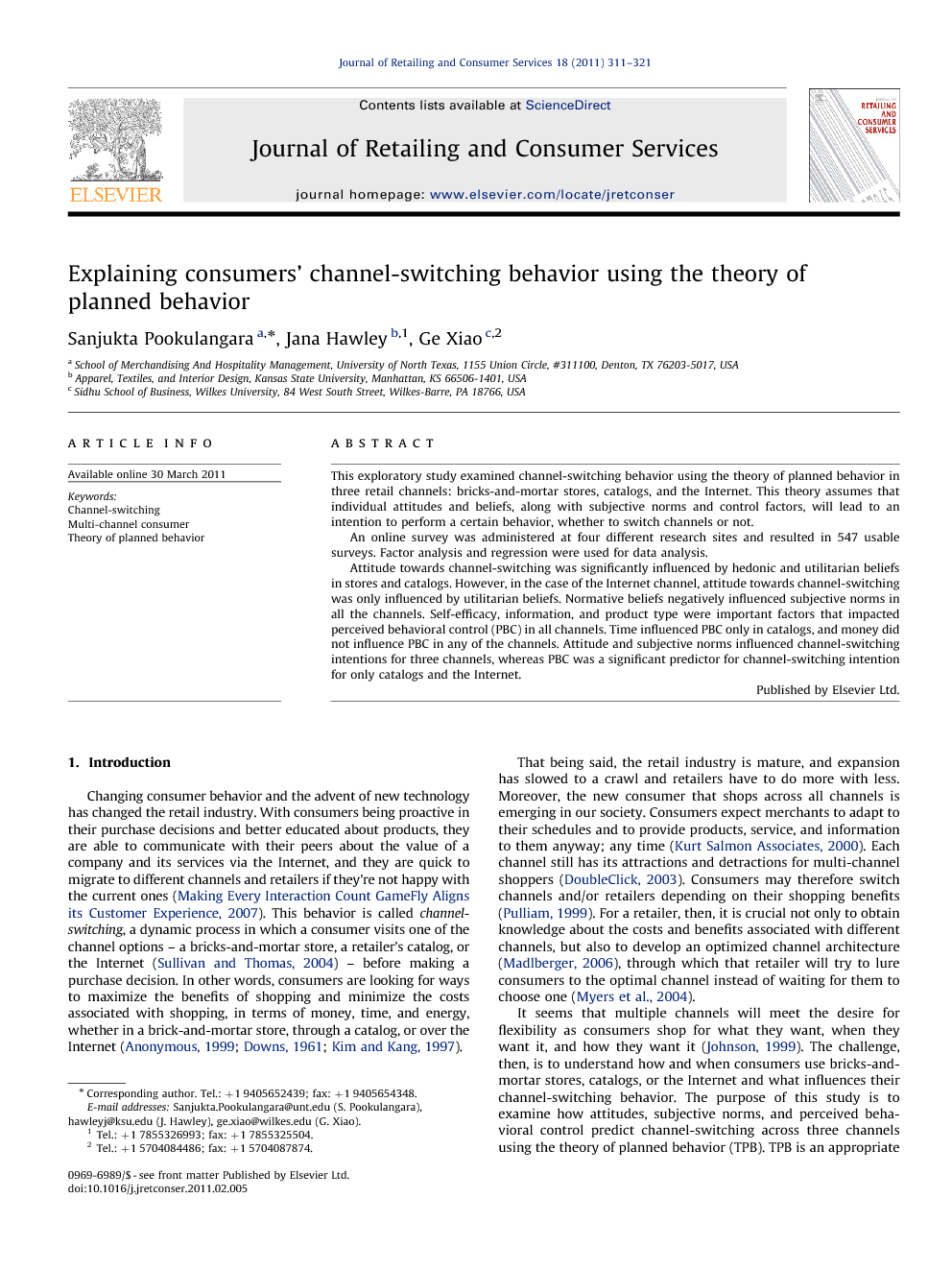 This exploratory study examined channel-switching behavior using the theory of planned behavior in three retail channels: bricks-and-mortar stores, catalogs, and the Internet. This theory assumes that individual attitudes and beliefs, along with subjective norms and control factors, will lead to an intention to perform a certain behavior, whether to switch channels or not. An online survey was administered at four different research sites and resulted in 547 usable surveys. Factor analysis and regression were used for data analysis. Attitude towards channel-switching was significantly influenced by hedonic and utilitarian beliefs in stores and catalogs. However, in the case of the Internet channel, attitude towards channel-switching was only influenced by utilitarian beliefs. Normative beliefs negatively influenced subjective norms in all the channels. Self-efficacy, information, and product type were important factors that impacted perceived behavioral control (PBC) in all channels. Time influenced PBC only in catalogs, and money did not influence PBC in any of the channels. Attitude and subjective norms influenced channel-switching intentions for three channels, whereas PBC was a significant predictor for channel-switching intention for only catalogs and the Internet.

Changing consumer behavior and the advent of new technology has changed the retail industry. With consumers being proactive in their purchase decisions and better educated about products, they are able to communicate with their peers about the value of a company and its services via the Internet, and they are quick to migrate to different channels and retailers if they’re not happy with the current ones (Making Every Interaction Count GameFly Aligns its Customer Experience, 2007). This behavior is called channel-switching, a dynamic process in which a consumer visits one of the channel options – a bricks-and-mortar store, a retailer's catalog, or the Internet (Sullivan and Thomas, 2004) – before making a purchase decision. In other words, consumers are looking for ways to maximize the benefits of shopping and minimize the costs associated with shopping, in terms of money, time, and energy, whether in a brick-and-mortar store, through a catalog, or over the Internet ( Anonymous and August, 1999, Downs, 1961 and Kim and Kang, 1997). That being said, the retail industry is mature, and expansion has slowed to a crawl and retailers have to do more with less. Moreover, the new consumer that shops across all channels is emerging in our society. Consumers expect merchants to adapt to their schedules and to provide products, service, and information to them anyway; any time (Kurt Salmon Associates, 2000). Each channel still has its attractions and detractions for multi-channel shoppers (DoubleClick, 2003). Consumers may therefore switch channels and/or retailers depending on their shopping benefits (Pulliam, 1999). For a retailer, then, it is crucial not only to obtain knowledge about the costs and benefits associated with different channels, but also to develop an optimized channel architecture (Madlberger, 2006), through which that retailer will try to lure consumers to the optimal channel instead of waiting for them to choose one (Myers et al., 2004). It seems that multiple channels will meet the desire for flexibility as consumers shop for what they want, when they want it, and how they want it (Johnson, 1999). The challenge, then, is to understand how and when consumers use bricks-and-mortar stores, catalogs, or the Internet and what influences their channel-switching behavior. The purpose of this study is to examine how attitudes, subjective norms, and perceived behavioral control predict channel-switching across three channels using the theory of planned behavior (TPB). TPB is an appropriate theory for studying channel-switching behavior since it has been suggested that when studying consumers’ purchasing behavior PBC should be taken into consideration as channel-switching does require skills and resources and does not occur merely because consumers decide to act (Shim et al, 2001). TPB has been also been used in studies that have examined multi-channel consumer behavior (Keen et al., 2004 and Kim and Park, 2005). Thus, the choice of TPB for this study is acceptable