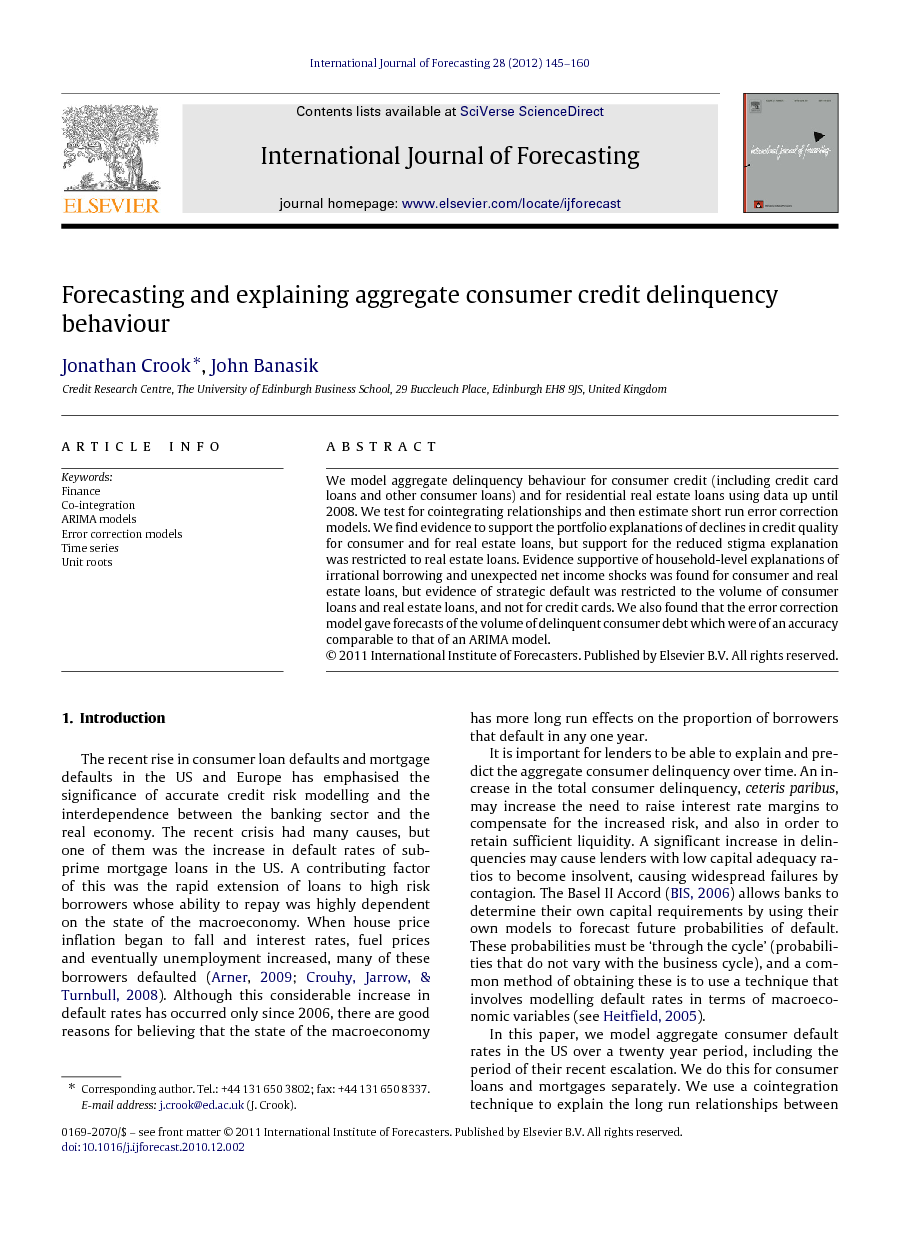 The recent rise in consumer loan defaults and mortgage defaults in the US and Europe has emphasised the significance of accurate credit risk modelling and the interdependence between the banking sector and the real economy. The recent crisis had many causes, but one of them was the increase in default rates of sub-prime mortgage loans in the US. A contributing factor of this was the rapid extension of loans to high risk borrowers whose ability to repay was highly dependent on the state of the macroeconomy. When house price inflation began to fall and interest rates, fuel prices and eventually unemployment increased, many of these borrowers defaulted (Arner, 2009 and Crouhy et al., 2008). Although this considerable increase in default rates has occurred only since 2006, there are good reasons for believing that the state of the macroeconomy has more long run effects on the proportion of borrowers that default in any one year. It is important for lenders to be able to explain and predict the aggregate consumer delinquency over time. An increase in the total consumer delinquency, ceteris paribus, may increase the need to raise interest rate margins to compensate for the increased risk, and also in order to retain sufficient liquidity. A significant increase in delinquencies may cause lenders with low capital adequacy ratios to become insolvent, causing widespread failures by contagion. The Basel II Accord (BIS, 2006) allows banks to determine their own capital requirements by using their own models to forecast future probabilities of default. These probabilities must be ‘through the cycle’ (probabilities that do not vary with the business cycle), and a common method of obtaining these is to use a technique that involves modelling default rates in terms of macroeconomic variables (see Heitfield, 2005). In this paper, we model aggregate consumer default rates in the US over a twenty year period, including the period of their recent escalation. We do this for consumer loans and mortgages separately. We use a cointegration technique to explain the long run relationships between default rates and the macroeconomy, and model changes in the default rates in terms of deviations from the long run relationship and short-run changes in the macroeconomy. We also compare the predictive performances of these models with the performances of ARIMA models, in order to see which methodology gives more accurate forecasts using the especially challenging task of forecasting recent events. We find evidence to support the existence of long run ‘equilibrium’ relationships between the level of interest rates and the level of debt outstanding on the one hand and aggregate default rates on the other, but, surprisingly, not between the level of house prices and the level of default rates. However, we do find that changes in house prices have a significant effect on changes in default rates, as do changes in disposable income, unemployment, consumer confidence, and interest rates. We also find that the two forecasting methodologies both give highly accurate forecasts of default rates, and are about equally accurate. Had these models been available in mid-2008, the subsequent increases in default rates could have been forecast accurately. We make two contributions. First, we offer a model of aggregate consumer default rates for the US using cointegration techniques, and thus separate long run ‘equilibrium’ relationships from short run dynamic relationships. Second, we compare the forecasting performances of this econometric technique and ARIMA. To the best of our knowledge, this has not been done before. The next section of the paper reviews the related literature, and we subsequently explain our model. In view of the especially high interest in mortgage defaults, we present our results for these sectors in separate sections. The final section concludes.

We have found evidence of a long-run relationship between the volume of delinquent consumer credit and the volume of consumer debt outstanding and the interest rate on personal loans. We have also found long-run relationships between delinquency rates for credit cards, the credit card interest rate and the level of household debt, as well as between delinquency rates for other debts and an index of household optimism. We also found a relationship between default rates on residential real estate loans, the mortgage rate and the real house price index. These findings suggest that different explanations of delinquency are appropriate for different types of debts. For the volume of consumer debt, variations in the quality of debt, but not changes in the stigma of default, appear to drive the delinquent volume; while at the level of the household irrationality, adverse income shocks and changes in house prices are at work. Decomposing consumer debt into the debt on credit cards and that on other consumer loans, we find evidence that the quality of debt and averse shocks apply, but negative equity does not, whereas for other consumer loans it is only strategic delinquency that applies, which is plausible because credit card loans do not involve collateral whilst other loans often do. For real estate loans we find that both explanations of delinquency apply, as do all household level explanations. These results are not consistent with the findings of Gross and Souleles (2002), who found evidence of reduced stigma in the case of credit cards. Our results are only partly consistent with those of Grieb et al. (2001); whilst we find evidence of the adverse shock hypothesis, we do not find that high interest rates, higher debt and unemployment significantly affect delinquency. We also found that the error correction model gave forecasts of the volume of delinquent debt which were of an accuracy comparable to that of an ARIMA model.