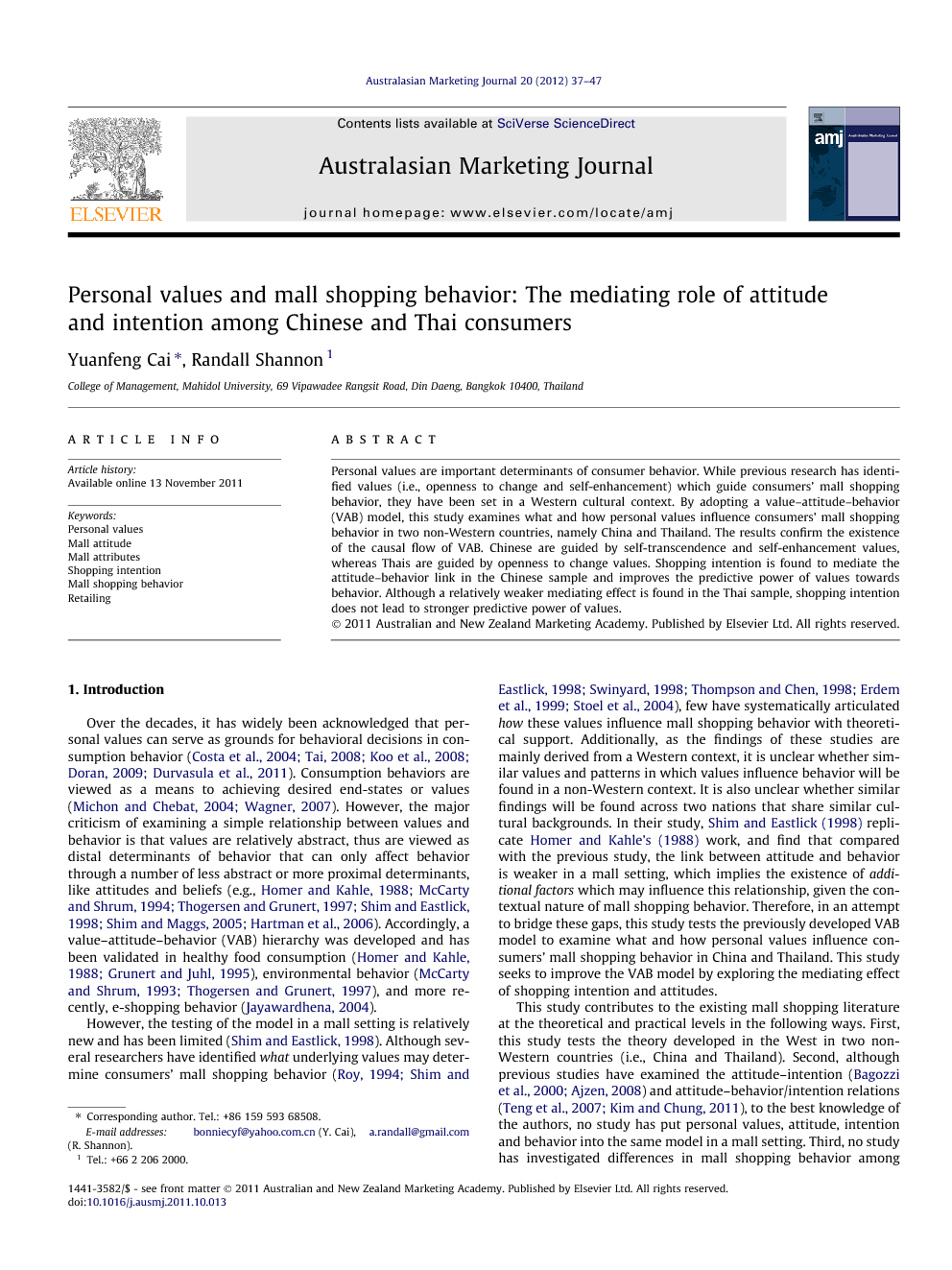 Personal values are important determinants of consumer behavior. While previous research has identified values (i.e., openness to change and self-enhancement) which guide consumers’ mall shopping behavior, they have been set in a Western cultural context. By adopting a value–attitude–behavior (VAB) model, this study examines what and how personal values influence consumers’ mall shopping behavior in two non-Western countries, namely China and Thailand. The results confirm the existence of the causal flow of VAB. Chinese are guided by self-transcendence and self-enhancement values, whereas Thais are guided by openness to change values. Shopping intention is found to mediate the attitude–behavior link in the Chinese sample and improves the predictive power of values towards behavior. Although a relatively weaker mediating effect is found in the Thai sample, shopping intention does not lead to stronger predictive power of values.

Over the decades, it has widely been acknowledged that personal values can serve as grounds for behavioral decisions in consumption behavior (Costa et al., 2004, Tai, 2008, Koo et al., 2008, Doran, 2009 and Durvasula et al., 2011). Consumption behaviors are viewed as a means to achieving desired end-states or values (Michon and Chebat, 2004 and Wagner, 2007). However, the major criticism of examining a simple relationship between values and behavior is that values are relatively abstract, thus are viewed as distal determinants of behavior that can only affect behavior through a number of less abstract or more proximal determinants, like attitudes and beliefs (e.g., Homer and Kahle, 1988, McCarty and Shrum, 1994, Thogersen and Grunert, 1997, Shim and Eastlick, 1998, Shim and Maggs, 2005 and Hartman et al., 2006). Accordingly, a value–attitude–behavior (VAB) hierarchy was developed and has been validated in healthy food consumption (Homer and Kahle, 1988 and Grunert and Juhl, 1995), environmental behavior (McCarty and Shrum, 1993 and Thogersen and Grunert, 1997), and more recently, e-shopping behavior (Jayawardhena, 2004). However, the testing of the model in a mall setting is relatively new and has been limited (Shim and Eastlick, 1998). Although several researchers have identified what underlying values may determine consumers’ mall shopping behavior ( Roy, 1994, Shim and Eastlick, 1998, Swinyard, 1998, Thompson and Chen, 1998, Erdem et al., 1999 and Stoel et al., 2004), few have systematically articulated how these values influence mall shopping behavior with theoretical support. Additionally, as the findings of these studies are mainly derived from a Western context, it is unclear whether similar values and patterns in which values influence behavior will be found in a non-Western context. It is also unclear whether similar findings will be found across two nations that share similar cultural backgrounds. In their study, Shim and Eastlick (1998) replicate Homer and Kahle’s (1988) work, and find that compared with the previous study, the link between attitude and behavior is weaker in a mall setting, which implies the existence of additional factors which may influence this relationship, given the contextual nature of mall shopping behavior. Therefore, in an attempt to bridge these gaps, this study tests the previously developed VAB model to examine what and how personal values influence consumers’ mall shopping behavior in China and Thailand. This study seeks to improve the VAB model by exploring the mediating effect of shopping intention and attitudes. This study contributes to the existing mall shopping literature at the theoretical and practical levels in the following ways. First, this study tests the theory developed in the West in two non-Western countries (i.e., China and Thailand). Second, although previous studies have examined the attitude–intention (Bagozzi et al., 2000 and Ajzen, 2008) and attitude–behavior/intention relations (Teng et al., 2007 and Kim and Chung, 2011), to the best knowledge of the authors, no study has put personal values, attitude, intention and behavior into the same model in a mall setting. Third, no study has investigated differences in mall shopping behavior among consumers in China and Thailand, two countries which share a similar cultural background. Fourth, the findings of this study can help mall managers to craft effective competitive marketing strategies by meeting consumers’ wants and needs at a deeper level. Bachrach (1995) proposes that understanding the underlying personal values that guide consumers’ mall shopping behavior will enable mall managers to win their shoppers emotionally and gain their trust relatively more easily.

Previous studies based on Western cultures suggest that self-actualizing (i.e., self-enhancement values in terms of Schwartz Value scale) and social affiliation values (i.e., openness to change values in terms of Schwartz Value scale) are two significant predictors toward consumers’ favorable attitude toward malls. Between the two values, social affiliation value has stronger power to predict attitude (Shim and Eastlick, 1998). However, the results of the analysis in the present study suggest that previous findings, which are based in a Western context, may not be completely applied to explain Chinese consumers’ mall shopping behavior. It is found that Chinese who place more importance on self-transcendence and self-enhancement values are more likely to have a favorable attitude toward malls. Moreover, the predictive power of self-transcendence exceeds the self-enhancement value. A number of scholars argue that people shop for the benefit of value fulfillment (i.e., Kahle and Kennedy, 1989 and Shim and Eastlick, 1998). Matching with the self-transcendence value, it is likely that Chinese consumers may shop to satisfy their functional needs. The self-enhancement value is also found to shape Chinese consumers’ mall shopping behavior. Shim and Eastlick (1998) suggest that people who value self-enhancement may be fulfilling their intrinsic needs for respect, self-fulfillment, and sense of accomplishment through shopping in the malls which provide higher-order goods. In China, it is possible that some shoppers may consider shopping in a mall, which is frequently positioned with a luxury image, as a way to demonstrate their face or social status. Thus, while variety and superb quality of merchandise remain critical to attract Chinese shoppers, the services tailored for meeting their symbolic needs may enhance the attractiveness of the mall. While the openness to change value does not influence Chinese shoppers, it is the only value that guides Thai shoppers’ behavior. The result is partially consistent with previous findings based on Western culture (Shim and Eastlick, 1998). The dominance of this hedonic-driven value may be derived from the influence of several authentic Thai cultural values, namely mai pen rai, sanuk and being present oriented. Thais may consider shopping at the malls mostly a leisure activity, full of fun and enjoyment. The previous study suggests an indirect relationship between personal values and mall shopping behavior. Personal values directly influence consumers’ attitude toward salient mall attributes, these attitude, in turn, influence consumers’ shopping behavior (Shim and Eastlick, 1998). The results of the present study lend support to this finding. In the Chinese sample, the more favorable attitude the consumers have toward the salient mall attributes, the more likely they will visit the mall frequently and spent more money in the mall. The absence of an attitude–time spent relationship may be explained that as Chinese are more utilitarian-driven shoppers, they tend to spend less time in the mall (Tsang et al., 2003). Their main task is to buy, thus once they finish the purchase, they are more likely to leave quickly. There are several possible reasons for their frequent visits. As the majority of the Chinese respondents are relatively young, they may have less time constraints, or they may be trying to minimize expenditures in any given trip. The broader range of goods and services provided by the mall compared to other shopping venues (e.g., supermarket, department store) may induce them to visit the mall frequently in order to update or collect the product information. This may be especially true when they exhibit strong intention to shop, they may visit the mall even more frequently to gather information about the product or services prior to their purchase. With an intention to shop in their mind, together with the rich product information, there is no doubt they will spend more money eventually, but will shop efficiently in the mall. In the Thai sample, consumers who have favorable attitude toward salient mall attributes are more likely to spend more money and time in the mall. However, the favorable attitude does not lead to higher shopping frequency. One possible reason may be that the majority of Thai respondents are relatively older than Chinese respondents. They may have jobs, thus have less time available. Driven by their hedonic needs, they may choose to visit the mall less frequently but stay relatively longer. Shopping intention is not likely to influence their shopping behavior significantly, given that their main goal is to relax and have fun in the mall, which does not require advanced preparation. In sum, although sharing similar cultural backgrounds, different underlying values are found to guide Chinese and Thai consumers’ mall shopping behavior. The results are inconsistent with previous findings, which suggest that consumers from similar cultures tend to be guided by similar values in their behavior (Kim et al., 2002 and Bjerke and Polegato, 2006). Therefore, the findings imply that culture alone, as a variable from the national level, may not be enough to understand consumer behavior. As several values in Thai culture are found to differ from Chinese, researchers may consider more caution when labeling cultures, such as individualistic and collectivistic. Social adaptation theory (Kahle, 1983 and Piner and Kahle, 1984) suggests that values are a type of social cognition that function to facilitate adaptation to one’s environment (Homer and Kahle, 1988). Thus, in addition to culture, personal values, as variables from the individual level may serve as an additional basis to understand consumer behavior. The underlying values that guide Chinese and Thai shoppers diverge from the values which guide Western shoppers. Consistent with previous findings (Shim and Eastlick, 1998), as more hedonic-driven shoppers, a value–attitude–behavior model can be used to understand Thai consumers’ mall shopping behavior. However, as more utilitarian-driven shoppers, a value–attitude–intention–behavior model works better to predict Chinese consumers’ mall shopping behavior.