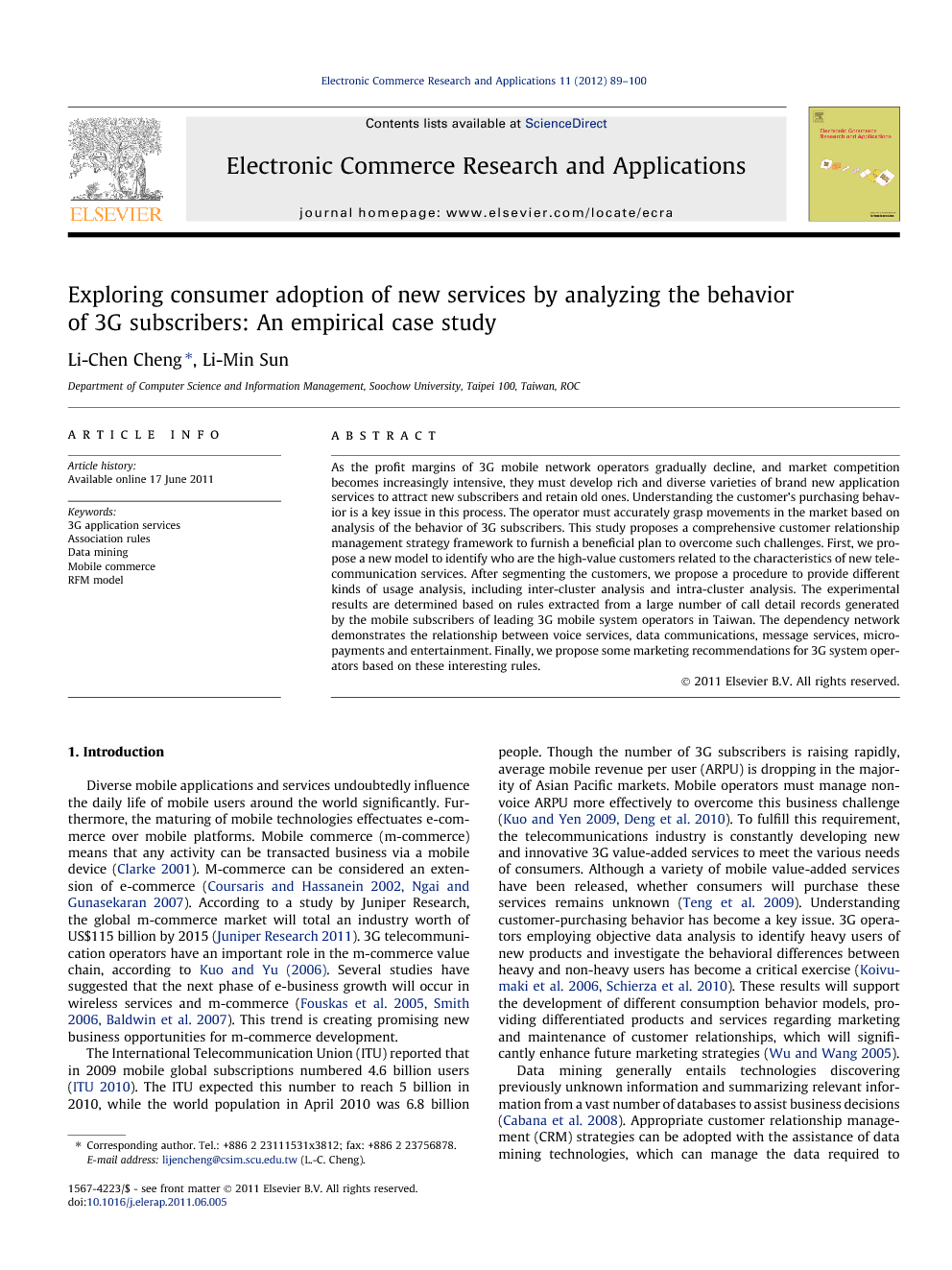 As the profit margins of 3G mobile network operators gradually decline, and market competition becomes increasingly intensive, they must develop rich and diverse varieties of brand new application services to attract new subscribers and retain old ones. Understanding the customer’s purchasing behavior is a key issue in this process. The operator must accurately grasp movements in the market based on analysis of the behavior of 3G subscribers. This study proposes a comprehensive customer relationship management strategy framework to furnish a beneficial plan to overcome such challenges. First, we propose a new model to identify who are the high-value customers related to the characteristics of new telecommunication services. After segmenting the customers, we propose a procedure to provide different kinds of usage analysis, including inter-cluster analysis and intra-cluster analysis. The experimental results are determined based on rules extracted from a large number of call detail records generated by the mobile subscribers of leading 3G mobile system operators in Taiwan. The dependency network demonstrates the relationship between voice services, data communications, message services, micropayments and entertainment. Finally, we propose some marketing recommendations for 3G system operators based on these interesting rules.

Diverse mobile applications and services undoubtedly influence the daily life of mobile users around the world significantly. Furthermore, the maturing of mobile technologies effectuates e-commerce over mobile platforms. Mobile commerce (m-commerce) means that any activity can be transacted business via a mobile device (Clarke 2001). M-commerce can be considered an extension of e-commerce (Coursaris and Hassanein, 2002 and Ngai and Gunasekaran, 2007). According to a study by Juniper Research, the global m-commerce market will total an industry worth of US$115 billion by 2015 (Juniper Research 2011). 3G telecommunication operators have an important role in the m-commerce value chain, according to Kuo and Yu (2006). Several studies have suggested that the next phase of e-business growth will occur in wireless services and m-commerce (Fouskas et al., 2005, Smith, 2006 and Baldwin et al., 2007). This trend is creating promising new business opportunities for m-commerce development. The International Telecommunication Union (ITU) reported that in 2009 mobile global subscriptions numbered 4.6 billion users (ITU 2010). The ITU expected this number to reach 5 billion in 2010, while the world population in April 2010 was 6.8 billion people. Though the number of 3G subscribers is raising rapidly, average mobile revenue per user (ARPU) is dropping in the majority of Asian Pacific markets. Mobile operators must manage non-voice ARPU more effectively to overcome this business challenge (Kuo and Yen, 2009 and Deng et al., 2010). To fulfill this requirement, the telecommunications industry is constantly developing new and innovative 3G value-added services to meet the various needs of consumers. Although a variety of mobile value-added services have been released, whether consumers will purchase these services remains unknown (Teng et al. 2009). Understanding customer-purchasing behavior has become a key issue. 3G operators employing objective data analysis to identify heavy users of new products and investigate the behavioral differences between heavy and non-heavy users has become a critical exercise (Koivumaki et al., 2006 and Schierza et al., 2010). These results will support the development of different consumption behavior models, providing differentiated products and services regarding marketing and maintenance of customer relationships, which will significantly enhance future marketing strategies (Wu and Wang 2005). Data mining generally entails technologies discovering previously unknown information and summarizing relevant information from a vast number of databases to assist business decisions (Cabana et al. 2008). Appropriate customer relationship management (CRM) strategies can be adopted with the assistance of data mining technologies, which can manage the data required to enhance understanding of customers (Ngai 2005). Successful applications of data mining techniques in CRM include churn prediction, fraud detection, cross selling, customer segmentation, and customer retention (Berson et al., 2000, Wei and Chiu, 2002, Liu and Shih, 2005, Hung et al., 2006, Cheng and Chen, 2009 and Chen et al., 2009). One of the most well-known examples is that of Wal-Mart, which used association rules to discover that beer and diapers are often purchased together (Hughes, 1994, Groth, 2000 and Han and Kamber, 2007). This study uses the data mining technique of association rules due to its efficiency (Agrawal et al., 1993 and Liu and Shih, 2005). Previous research in the area of m-commerce focused on exploring mobile consumer intention or acceptance (Hsu et al., 2007, Wang et al., 2006, Koivumaki et al., 2006 and Schierza et al., 2010). There is a lack of knowledge about how to investigate the consumption behavioral differences between early adopters and other users. Studies of the behaviors that analyze the behaviors of valuable 3G mobile consumers and real consumer usage are rare and a fitting methodology for analysis of consumer behaviors in the case of 3G telecommunications needs to be developed (Bose and Chen 2010). This paper provides two main contributions: from a conceptual viewpoint, this study proposes a comprehensive CRM strategy framework that contains a customer segmentation process and a behavior analysis process. The proposed framework can address the lack of knowledge regarding consumption behavioral differences between early adopters and other users. Firstly, we built a customer segmentation model, the TFM, which depends on the value determinations of 3G mobile services. We define heavy users as early adopters who use 3G services frequently (F), accumulate a greater volume of service time (T), and have large bills for a time period of one month (M). Other studies also define heavy users similarly ( Lim et al., 2005 and Gensler et al., 2007). This study then proposes a procedure for consumer behavioral analysis and a comparison of different behavioral clusters. 3G operators can use these tools to understand the behaviors of valuable users and propose novel marketing strategies to increase customer adoption. From an empirical viewpoint, the proposed framework draws on 3G value-added usage data obtained from a leading telecommunications firm in Taiwan. To the best of our knowledge, no behavioral analysis of 3G mobile subscribers using association rules extracted from real usage patterns exists for understanding behavioral differences between valuable clusters. Taiwan is one of the most crucial m-commerce markets in the world. At the end of December 2009, the number of mobile phone subscriptions in Taiwan had risen to 26.96 million, a penetration rate of 116.6% (in other words, 116 mobile phone numbers for every 100 people). Furthermore, 58.7% of subscribers used 3G services. This rate implies a potential representative market for enhancing understanding of 3G valued-added service adoption. This paper hence provides sound strategies to increase new service adoption for 3G companies. The rest of the paper is organized as follows: Section 2 briefly reviews existing literature; Section 3 describes the proposed research modules; Section 4 presents an analysis of the proposed procedures in a series of experiments; Section 5 provides several managerial implications for marketing reference; and finally, the last section offers conclusions such as the limitations of this study and considerations for future research.

Most existing studies of m-commerce and related issues have focused on exploring mobile consumer intention or acceptance. This study is intended to be a valuable source for further empirical and conceptual research on 3G value-added services. We proposed a strategy framework to make up for the lack of knowledge about how to investigate the consumption behavior differences between early adopters and other users. We first proposed a new customer segmentation model that will help to identify high-value 3G consumers and to understand customer purchase behavior. By knowing the differences between early adopters and potential users, companies can develop different marketing strategies to attract new mobile services users and retain existing ones. To the best of our knowledge, there has been no research conducted on behavioral analysis of 3G mobile subscribers using association rules extracted from their real usage patterns with the goal of ascertaining behavioral differences between value clusters. The experimental results are based on rules extracted from nearly 50 million customer data records generated by the mobile subscribers of one of the chief competitors among 3G mobile system operators in Taiwan. This rich data set supported our development of results that provide valuable knowledge about their customers’ behavior patterns. Furthermore, this study provides several important practical guidelines for 3G operator. The purpose of fulfilling the explicit and implicit demands of valuable customers and increasing revenues for operators can be accomplished, creating a win-win situation. Despite plentiful services and applications now provided by mobile network operators, particular ones like the entertainment and payment have not been extensively adopted within the valuable customer groups. Operators should not only concentrate on capital expenditure and development of brand-new services but also be aware of expectations or feedback from target users. This study offers opportunities for mobile network operators and researchers to confer about issues related to services and future users.