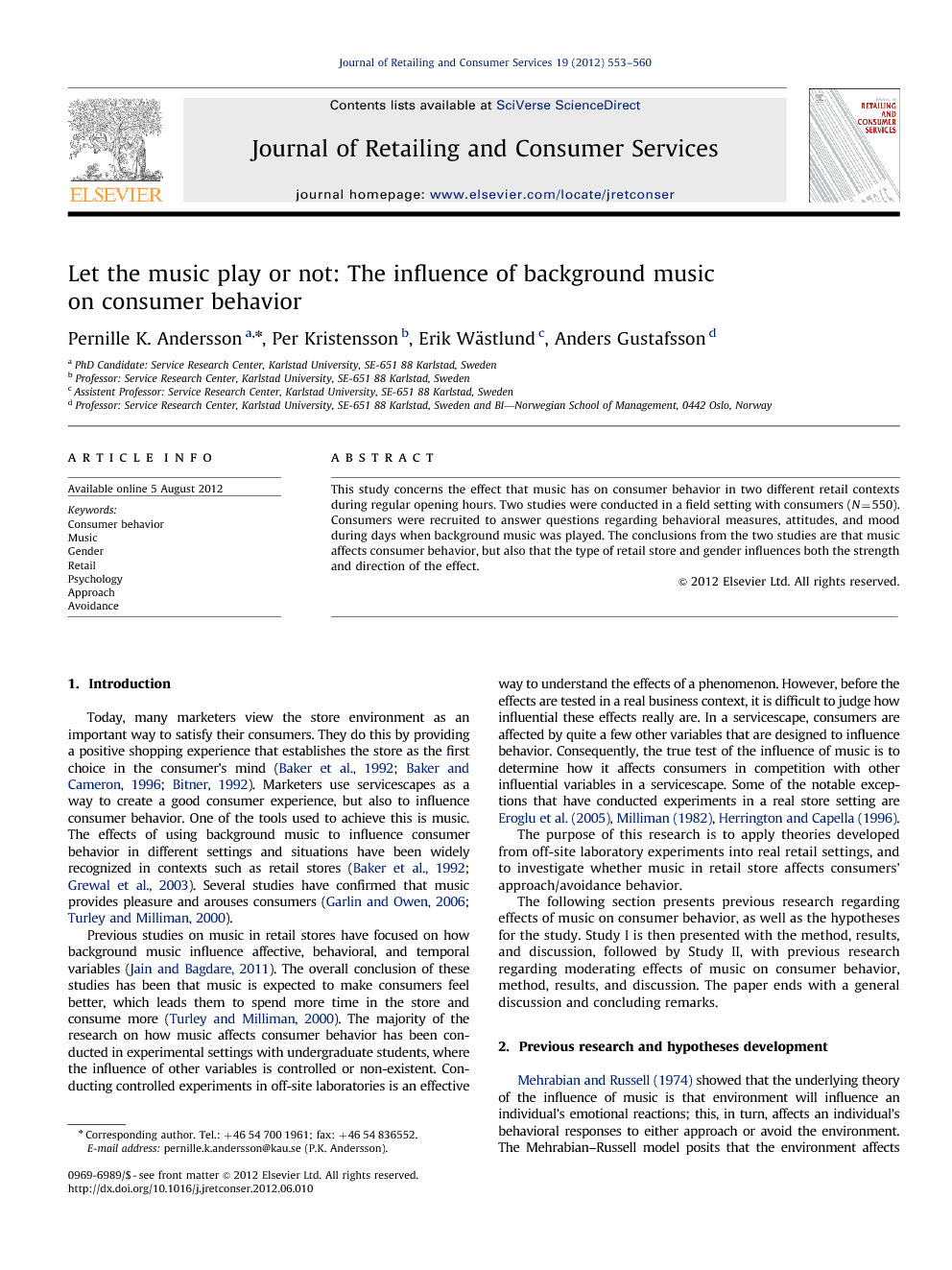 This study concerns the effect that music has on consumer behavior in two different retail contexts during regular opening hours. Two studies were conducted in a field setting with consumers (N=550). Consumers were recruited to answer questions regarding behavioral measures, attitudes, and mood during days when background music was played. The conclusions from the two studies are that music affects consumer behavior, but also that the type of retail store and gender influences both the strength and direction of the effect.

Today, many marketers view the store environment as an important way to satisfy their consumers. They do this by providing a positive shopping experience that establishes the store as the first choice in the consumer’s mind (Baker et al., 1992, Baker and Cameron, 1996 and Bitner, 1992). Marketers use servicescapes as a way to create a good consumer experience, but also to influence consumer behavior. One of the tools used to achieve this is music. The effects of using background music to influence consumer behavior in different settings and situations have been widely recognized in contexts such as retail stores (Baker et al., 1992 and Grewal et al., 2003). Several studies have confirmed that music provides pleasure and arouses consumers (Garlin and Owen, 2006 and Turley and Milliman, 2000). Previous studies on music in retail stores have focused on how background music influence affective, behavioral, and temporal variables (Jain and Bagdare, 2011). The overall conclusion of these studies has been that music is expected to make consumers feel better, which leads them to spend more time in the store and consume more (Turley and Milliman, 2000). The majority of the research on how music affects consumer behavior has been conducted in experimental settings with undergraduate students, where the influence of other variables is controlled or non-existent. Conducting controlled experiments in off-site laboratories is an effective way to understand the effects of a phenomenon. However, before the effects are tested in a real business context, it is difficult to judge how influential these effects really are. In a servicescape, consumers are affected by quite a few other variables that are designed to influence behavior. Consequently, the true test of the influence of music is to determine how it affects consumers in competition with other influential variables in a servicescape. Some of the notable exceptions that have conducted experiments in a real store setting are Eroglu et al. (2005), Milliman (1982), Herrington and Capella (1996). The purpose of this research is to apply theories developed from off-site laboratory experiments into real retail settings, and to investigate whether music in retail store affects consumers’ approach/avoidance behavior. The following section presents previous research regarding effects of music on consumer behavior, as well as the hypotheses for the study. Study I is then presented with the method, results, and discussion, followed by Study II, with previous research regarding moderating effects of music on consumer behavior, method, results, and discussion. The paper ends with a general discussion and concluding remarks.

The overall purpose of the present investigation was to explore whether music played in a retail store affects consumer behavior and if gender has a moderating role. Results from this investigation clearly show that music positively affects one of the most important parts of approach behavior, namely purchase. This result is in line with several other studies that have shown that music influences sales (Eroglu et al., 2005, Caldwell and Hibbert, 2002 and Milliman, 1986). Studies I and II both found that music affected the arousal level, but that it was moderated by gender. Furthermore, gender also moderated the effect that music had on approach behavior in Study I. These results from this study indicate that females preferred no-music or slow-tempo music, and the opposite is true for males. Another aspect of interest is that, in Study II, music affected enjoyment negatively (most enjoyment was when no music was played). This is an interesting finding because it is in the music conditions (this applies for both studies) customers spend most money. From the two studies, we can conclude that music affects consumer behavior, but that the type of retail store and gender influences both the strength and direction of the effect. Some research reports that whether the stimuli is experienced as pleasant or unpleasant depends on whether the consumption activities are hedonic or utilitarian, where the latter is more often experienced as unpleasant (Kaltcheva and Weitz, 2006). The result of music and gender interactions indicates that music affects females and males differently. Females are positively affected by no music or slow-tempo music. Males are affected positively by music and fast-tempo music. This is in line with studies by Kellaris and Rice (1993), who found that females respond positively to music at lower volumes, and Stipp (1990), who showed that females prefer slow and soft music compared to males, who prefer fast and louder music. The conclusions from our two studies are that gender moderates the effect that music has on approach behavior, but music alone has a positive effect on actual purchase. This is an important finding that gives retail managers knowledge about the different effect of music being played in the retail store, in the short run music increases sales but in the long run music could decrease customer satisfaction and loyalty which affects gross sale. Three qualities distinguish this research from prior work in this area. First, because the studies were conducted in actual retail stores with naturally occurring shopping behavior, the external validity of the findings surpasses what has been seen in the literature to date. Second, these studies has investigated the differences of music and the absent of music. This is to the researchers’ knowledge something that other studies have not examined. Usually, music is varied by tempo, pitch, volume or mode, which does not reflect the reality of retail atmosphere and it does not examined the question, is playing music always beneficial for retailers. The third contribution of the studies is the direction toward the interaction effect of music and gender. The literature indicates that gender has a moderating effect, while empirical research suggests that males and females tend to have different attitudinal and behavioral orientations in their buying behavior (Homburg and Giering, 2001). Some researchers have suggested that there are gender differences in hearing sensitivities, and that males and females process auditory stimulus differently and that female respond more positively to music at lower volumes (Kellaris and Rice, 1993). The findings from the present study indicate that it is not only volume that is processed differently, but also the tempo. Given the importance of consumer satisfaction in retail stores, our results suggest that retailers should be aware of how music really affects consumer satisfaction and, more specifically, that the effect might differ between male and female in respect to the type of music played. This allows retailers to vary the format of their background music to fit different demographic segments or choose not to play background music at all, which should ultimately increase sales, consumer loyalty and consumer satisfaction. Many store owners do not know whether music really influences consumer behaviour at all and therefore play music “just because everyone else does”. This study suggests that music does have an influence, but that the influence is different for different customer groups. Managers in a retail setting should adapt music based on who their customers are, and this could even differ across different days or time of day. Otherwise, managers run the risk of turning half their clientele into unpleased and stressed consumers.